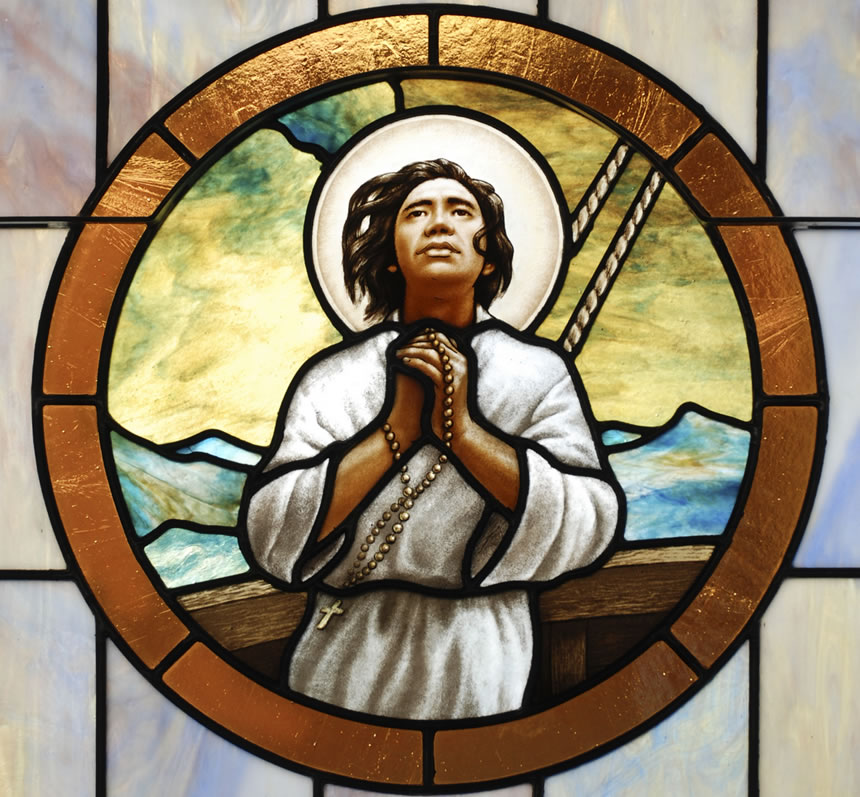 Around the year 1600, St. Lawrence was born in Binondo, Manila, Philippines to the Ruiz family. His local name was Lorenzo. He had a Chinese father who taught him Chinese, while his Filipino mother taught him Tagalog – the local dialect.

In this time of Philippine history, the country was under Spanish rule. Christianity was one of the things Spain brought to the Philippines. It was under this setting that Lorenzo was educated by the Dominicans, and became an altar boy. Because he had good penmanship, he was made a scribe. Later, he married a woman named Rosario, who gave him two sons and a daughter.

He worked as a clerk for a Church in Binondo and led a very obscure life, that is until he was falsely accused of killing a  Spaniard in 1636. For a Filipino to kill a Spaniard at that time was doubly serious and a local might not get proper justice at the hands of a court run by Spain. So Lorenzo thought of going to Okinawa to seek asylum there.

Together with others who would all become saints with him, he sailed to Japan through the aid of the Dominicans. His companions are Antonio Gonzalez, Guillermo Courtet, Miguel de Aozaraza, a Japanese priest named Vicente Shiwokuza de la Cruz, and a lay leper named Lazaro of Kyoto.

News doesn’t travel fast in the 1600s as it does today, and unknown to them, Japan was persecuting Christians. Lorenzo, with his companions, was arrested and kept in prison. As the saying goes, he jumped out of the pan and into the fire. Two years later they were brought to Nagasaki where they were to undergo various methods of torture in an effort to make them deny their faith.

One method was the water torture wherein the victim is forced to swallow water. A tube, sometime made of hollowed out bamboo, is usually inserted into the mouth to force water in. When the victim is full of water, a board is place on his abdomen and several men forcefully jump onto it so that water is forced out every orifice of the body.

Another method was to hang a person upside-down over a pit, known as the gallows and pit . The Japanese would bind the victim securely but making sure one hand was free to signal that he or she was recanting his or her faith. A part of the head would be punctured so that blood can trickle out, then, tied by the feet, they would be lowered head-first into a pit. Sometimes it was just until the head; sometimes only have of the body, and sometimes all the way until only the feet were exposed. Upside-down, blood would flow out slowly until eventually a victim would die from blood loss, but not after a long agonizing time. Reports say that sometimes the pit is filled with feces and rotting meat to make it even more unbearable.

The Gallows and Pit Tsurushi in Japanese, and Horca y hoya in Spanish, was used by Japanese to make Christians recant their faith. Sometimes one is put halfway in, and other times all the way. 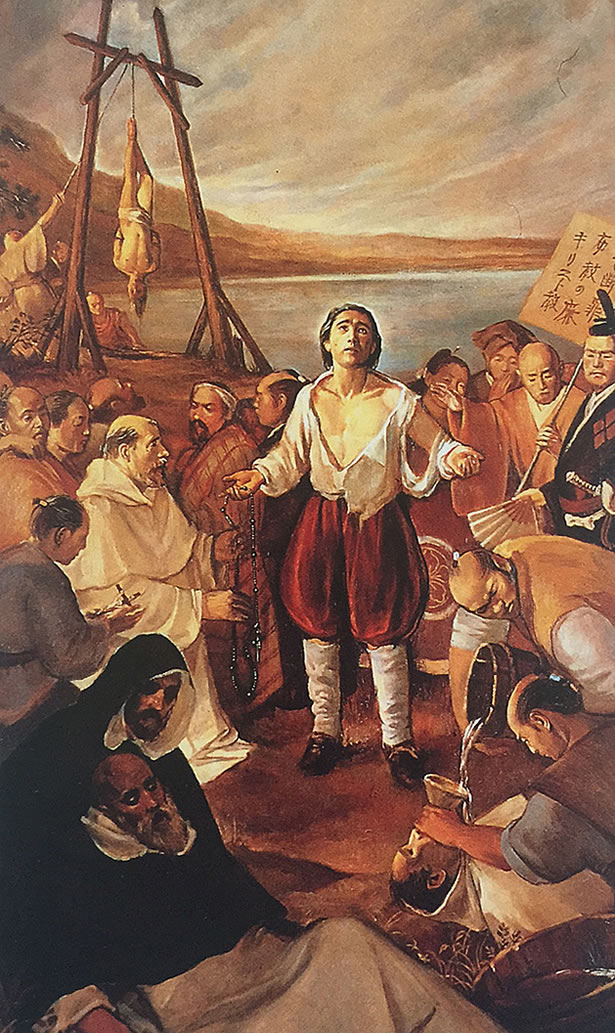 A painting that shows San Lorenzo with his companions. Tsurushi in seen on the background, as well as the water torture in the foreground.

Lorenzo and his companions died as martyrs this way on September 27, 1637. But, witnesses say, Lorenzo went to his death after saying, “I am a Catholic and wholeheartedly do accept death for God; had I a thousand lives, all these to Him shall I offer.”

St. Lawrence of Manila, or locally known as San Lorenzo Ruiz, was canonized as a martyr, together with his companions, making him the first Filipino saint. He has become the patron saint of altar boys, Filipino migrant workers, and migrants in general. On his feast day, we are reminded of the martyrs who gladly gave up their lives to give witness to Christ so we, too, may give up our lives, if not in the physical sense, in the spiritual sense – that is doing everything for the love of God.