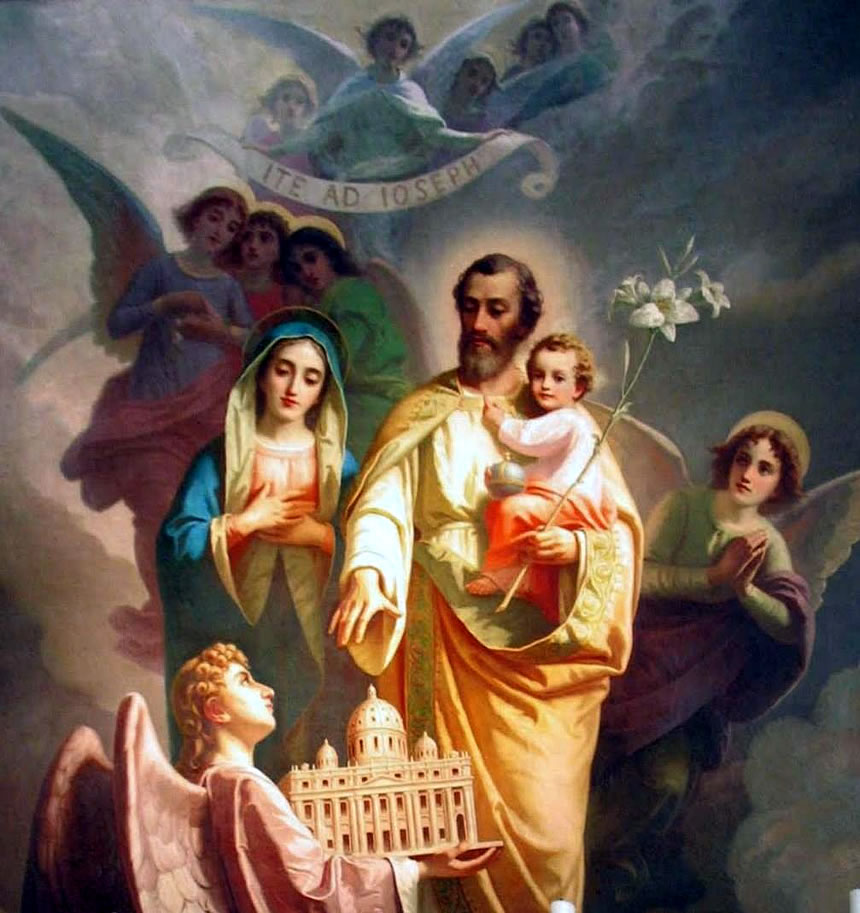 There are only a few verses in Scripture that tell us about Saint Joseph, and it might good to chew and suck the marrow out of them.

In St. Matthew’s Gospel, Chapter 1:1-17 might be one of the most boring verses in Scripture as it traces the genealogy of Jesus. But this is important context because we see that Joseph is from the line of King David. This is important because the messiah was said to come from David. (Isaiah 11:1)

While these things are not difficult to conclude, we might quickly think Joseph was a “just man” because he wanted to divorce Mary quietly. The word just means “to perform the law.” So performing the law is “justice.” In that time, someone “just” must be doing what God wants through the law.

Theologians argue that Joseph wanted to divorce Mary for two reasons, and none of them is because he thought Mary had an illicit relationship with someone. The first is he felt that God has a plan for Mary that didn’t include him, so he wanted to take himself away from the equation. The other is he felt he wasn’t worthy to be part of God’s plans that he wanted to be apart from it. In both cases, he feared he was insignificant. With this as context, it makes sense that the angel greeted him with, “Do not be afraid.” (Matthew 1:18-19) So, when Joseph obeys the angel, he is in fact “just” because he obeys what God wants.

Joseph gives himself as father to Jesus

The next thing the angel told Joseph is, “Joseph, son of David, do not be afraid to take Mary your wife into your home. For it is through the Holy Spirit that this child has been conceived in her. She will bear a son and you are to name him Jesus, because he will save his people from their sins.” (Matthew 1:20-21)

This instruction makes Joseph realize that he is indeed part of God’s plan. In that time, giving a name to a son meant more than just finding something suitable for the child. Name giving was done during circumcision, which is a covenant. That meant when the father gave the child a name, he is giving himself as a father to the boy, and the child gives himself as a son to the father. So, when Joseph gave the son of Mary a name, it was no token ritual, but making Jesus part of his genealogy. This is important because Jesus is annexed to the entire lineage of Joseph. It is in this way that Jesus becomes a “Son of David” – a title for the Messiah.

What was it like to be part of the Holy Family, we might wonder. A glimpse can be seen when the Magi visited them. In Matthew 2:11-12, we read that the Magi entered the house and saw the child with Mary. There are two things that we must “see.” First is that the Holy Family is now in a house; this is a different place than the manger where Christ was born. In the Gospel of Luke, people went back to their hometown to register for a census. Therefore, Bethlehem must have been packed with people. Every visitor must have grabbed at a chance to rent a decent place – even a corner of a room with a bed would be a blessing. But, every square inch of property was rented out so Joseph could not get a decent place where Mary could give birth with privacy. This means the manger where Christ gave birth was not a place fit to live for no one wanted to rent it out.

When the Gospel of Matthew tells us that the Magi visited the Holy Family, they were already in a house. This must have meant the census was over, and Joseph was able to rent out a more decent room.

The other thing missing from Matthew’s Gospel is Joseph! In a patriarchal society, to not mention the father would be insulting if he were there. Of course, the best explanation why Matthew omitted mentioning Joseph is he probably wasn’t there. Frank J. Sheed, a theologian, suggests that Joseph must have been out working. Since they were away from home and renting a place instead, Joseph needed to work to pay for the rent. He did not have a shop in Bethlehem, so he must have been out peddling his services.

This makes the Holy Family a real family: Mary watched over Jesus, while Joseph was out working. God did not intervene by miraculously making a place for them. Manna did not fall down on them. God did not make food and water miraculously appear. In a way, they were like an ordinary household where the father provided for the family.

A role without a job description

The next thing we read is of an angel warning them to leave in the middle of the night to escape Herod’s murderous rage. It is apparent Joseph wasn’t given a detailed plan on how he should do his role. It was given on a need-to-know basis. This must mean Joseph trusted God to lead him as needed, and only when needed.

Joseph would lead them to live Egypt (just like Joseph the Patriarch did with his family), and eventually settled down in Nazareth where he (unknowingly?) fulfills that the Messiah “shall be called a Nazorean.”

We must see in all of this how Joseph allowed God into his life. He had plans to live his life with Mary, but that was interrupted because God had other plans for him. By allowing God to “disrupt” his plans, Joseph participated in the beautiful Paschal Mystery. For Joseph, it wasn’t what he wanted; it was about what God wanted.

Because he protected Christ from Herod’s massacre of infants, Joseph is the Protector of the Universal Chruch for from heaven, he continues to protect the Church – the Mystical Body of Christ his son.