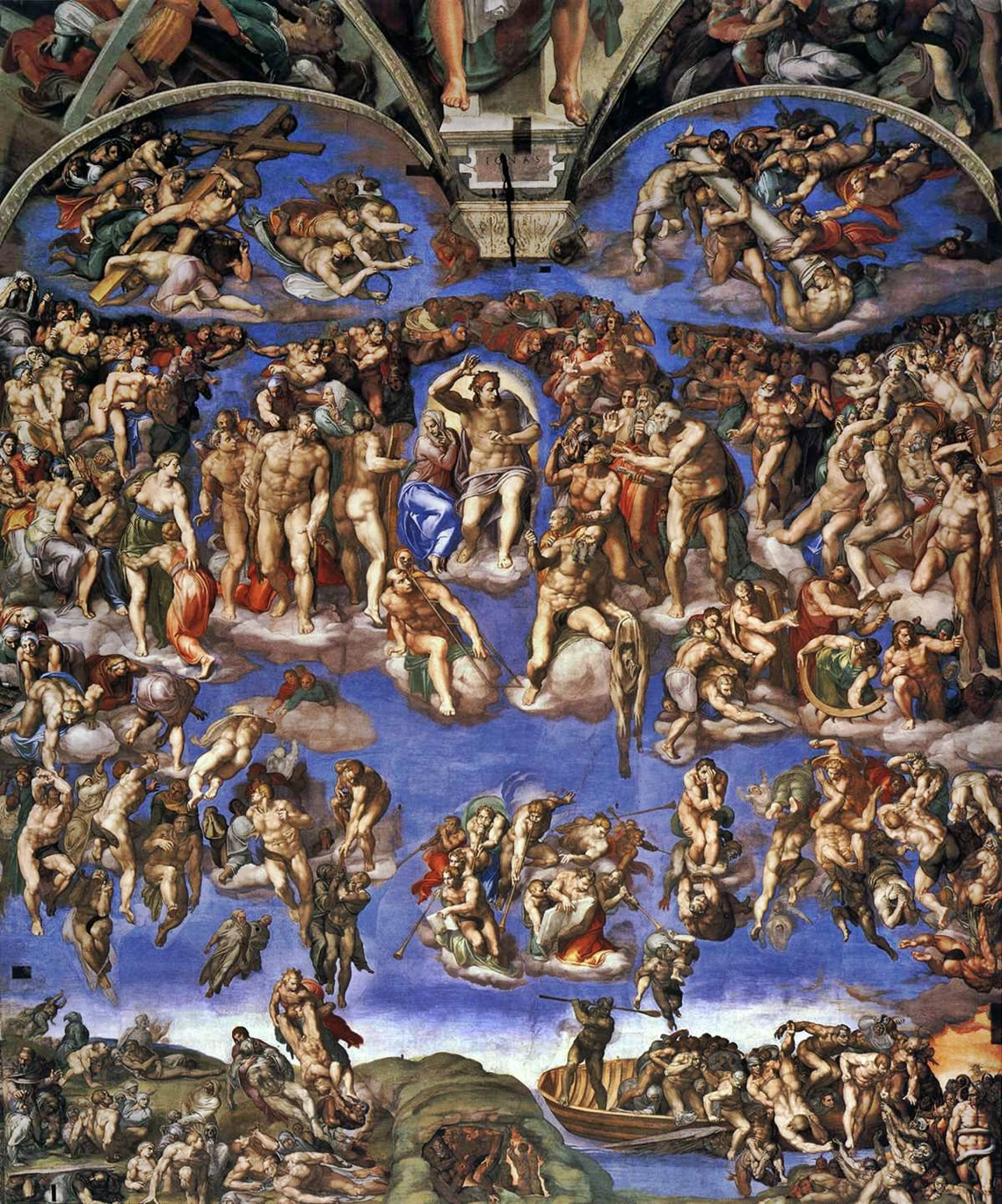 In a nutshell, the fresco by Michaelangelo illustrates what will happen in what doctrine calls the Last Judgment when all of mankind will be judged according to his works.  It is worth attending to the different meanings of the details, and how they jibe with what we believe is the Last Judgment.

At first glance, we can see that the entire fresco has a clockwise swirling motion with Christ at its center. We should realize that it is the motion of his hands that is creating the swirl as if commanding the order of things.  That is what it is: Christ determining who will spend an eternity with him and those who won’t.  The people on the left side of the fresco are being pulled up to where angels and saints are while those at the right are being pushed down where there are horned creatures and serpents loading people into a boat to be taken to a place that is separated from God.

We believe that at the moment of our death Christ will determine our relationship with him. However, at the end of time, he will come again no longer as a teacher, but as a judge.  It is true that Christ’s passion death and resurrection has redeemed mankind’s relationship with God, but it is also true that we must exhibit the fruits of this gift (grace) we received.  In one of his parables, Jesus explains this criterion well:

Then the king will say to those on his right, “Come, you who are blessed by my Father. Inherit the kingdom prepared for you from the foundation of the world. For I was hungry and you gave me food, I was thirsty and you gave me drink, a stranger and you welcomed me, naked and you clothed me, ill and you cared for me, in prison and you visited me.

And the king will say to them in reply, “Amen, I say to you, whatever you did for one of these least brothers of mine, you did for me.”

Then they will answer and say, “Lord, when did we see you hungry or thirsty or a stranger or naked or ill or in prison, and not minister to your needs?”

Here we learn that when we say God dwells in each of us, it isn’t just a figure of speech as this parable explicitly reveals. We cannot say we love God if we don’t love God who dwells in our neighbor.  This parable is so tied up with this fresco because it doesn’t seem like a coincidence that from the point of view of Christ, in the fresco, those rising are on his right, and those going down are on his left.

So why a Final Judgment if we have already been judged at the moment of our death? The Final Judgment is not a second chance to reconsider our standing with God. The point of the Final Judgment is to show the entire world that Jesus is the king of all. It is meant to show his glory. So in the fresco, everyone is naked – as a symbol of being stripped of rank – for social, political, and any kind of earthly status has no merit.

One detail that we shouldn’t miss is the dead coming out of tombs and out of the ground at the bottom left of the fresco. It is a representation of another doctrine we believe – the resurrection of the dead before the Last Judgement.  When we will be judged by Christ, our bodies will first be reunited with our souls, so it first has to resurrect.  Because we have performed good and evil acts during our life with both body and soul, we should be judged with both body and soul. It reinforces our belief that we are not spiritual beings that temporarily inhabit a material body. We, in fact, believe that man is both body and soul, and if man is to be with God in heaven after the end of time, it will be with a body and soul. We won’t have a body that is corruptible; instead, we will get a glorious body the way Jesus got a glorious body after his resurrection. During his Ascension, he entered heaven with a glorious body just the same way we will at the end of time.

Lastly, let us focus again on Jesus. Those rising at the left get “caught up” with the other saints surrounding Christ. On the left, we see patriarchs, Hebrew women, holy virgins, and Sybils. On the right we see apostles like Saint Peter who is seen holding keys, confessors, martyrs and the instrument of torture used on them like St. Bartholomew holding his flayed skin – poor guy, and St. Catherine of Alexandria holding a fragment of a torture wheel. I can’t help but mention that the only person beside Christ is his mother, Mary, who lowers her eyes as if unable to bear the judgment of those being pushed away from the heavenly realm of Christ and his saints.

I think Michaelangelo does a good job, with this fresco, in reminding us that we will be accountable for the things we do and that one day we will be judged for them.

Additional resource:
See who is who in the Last Judgment. 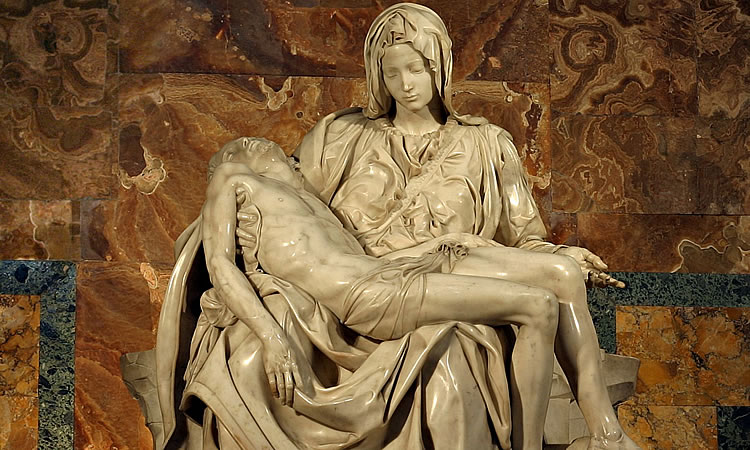 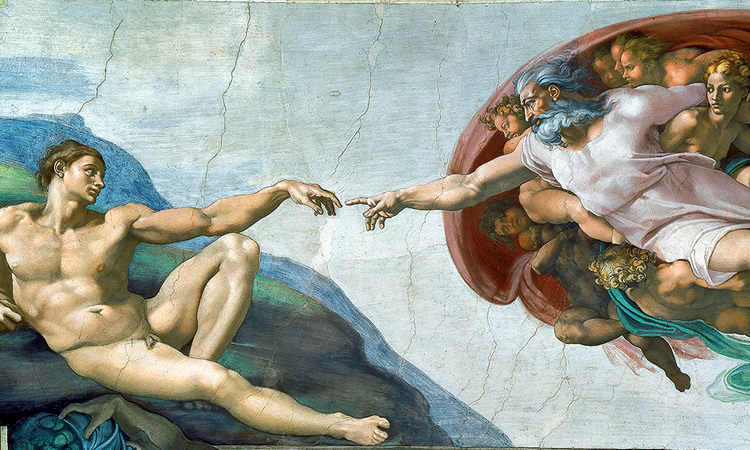