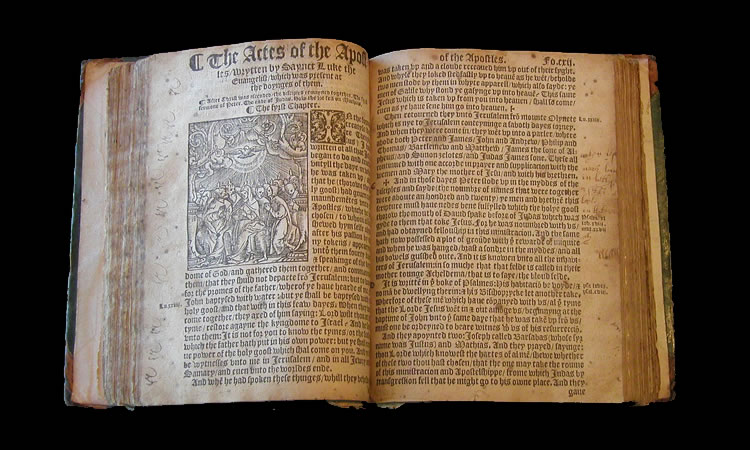 Short answer: yes, but only the unworthy versions.

Long answer...
There is this popular, but baseless idea that the Catholic Church banned the Bible from being written in anything except Latin to keep people in the dark, thus preventing an English version.

First things first: let us remember that at the alleged time this happened, Bibles were costly and required a lot of time to produce one considering it was handwritten (no printing presses yet), and they used parchment or vellum (no paper as we know it today yet.) Another thing to consider was that most of the world was under Roman rule. This meant that Latin was the medium of writing and reading. Anyone who was educated used Latin. There, therefore, was no point in having other vernacular versions that were costly to produce because there was no audience for it. In fact, the Church produced Latin Bibles because people did not want to read any other version. If I were a book publisher, it doesn’t make sense to produce books that won’t be read.

As time went on, when people were being educated in their vernacular languages, indeed the need for vernacular Bibles became a reality. The Church produced Bibles in different languages. In fact, the Church produced a printed English Bible in 1456 – before the Protestant Reformation – called the Mazarin Bible named after the Catholic Cardinal Mazarin. By this fact alone, it isn’t true that the Catholic Church wanted to suppress reading of the Bible in the vernacular.

So why was there a banning of some English Bibles? Well, the Church simply banned CERTAIN versions because they were unworthy in an effort to preserve the original ideas and scripture as faithfully as possible. So when erroneous Bibles appeared, she banned them, and yes even burned them to prevent its proliferation. A version, for example, called the“Wicked Bible" had the erroneous text,“Thou shalt commit adultery.” Clearly the typesetter forgot to include the“not" by mistake. The Church naturally condemned these versions. You can take a look at other erroneous Bibles at http://en.wikipedia.org/wiki/Bible_errata).

The English version of John Wycliff was banned because it was full of errors. The meaning of a lot of verses were twisted to suit his own doctrine. Instead of preserving scripture and deriving doctrine from it, he changed scripture to support the doctrines he wanted. Of course, the Church banned such a Bible.

Likewise, the English version of William Tyndale was also full of translation errors. He was not a scholar, nor learned in doctrine nor scripture. So when he translated the Bible into English, verses could no longer be read in what they originally meant. In the case of Tyndale, his errors were out of ignorance and not malice. Naturally the Church could not allow such a Bible to proliferate, thus banning it.

The Catholic Church did not ban these English Bibles because they were in English. They were banned because they contained errors.