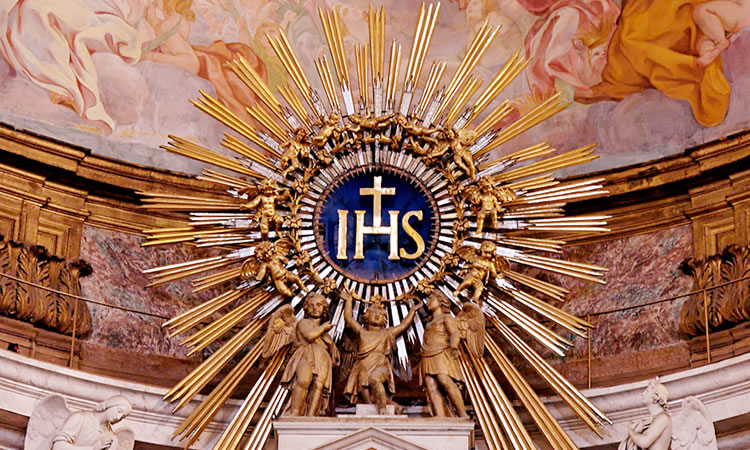 It would seem that God gives a name based on one’s nature. For example, he revealed his name to Moses as YHWH (Yahweh) or in English, “I am who am.” (Exodus 3:14)  His name tells us about his nature – that he is existence itself. Another way of putting it is that for God, his essence and his being are one and the same thing. In the words of St. Thomas Aquinas God is the “sheer essence of being”.

The name of Abram was changed to Abraham that means “father of a multitude” and his wife Sarai was changed by God to Sarah that means “mother of nations.” (both from Genesis 17:5)  Jacob’s name was also changed to Israel that means “having power with God.” (Genesis 32:28). In the New Testament, there is only one person whose name was changed: Simon. He was renamed Peter that means “rock” (John 1:42) as he would be the rock on which Christ would build his Church. Each of these names expresses the persons“character" in God’s plan of salvation.

Sometimes no renaming takes place but a name shows the quality of the person. The name of the archangel Michael means “who is like God.” Theologians are in common agreement that when Satan rebelled against God saying “I will not serve” a voice rang out from the choir of archangels shouting out: “who is like God?” St. Michael was mocking Satan by asking him “Who do you think you are? God?”  So the name of St. Michael is, in fact, his battle cry against Satan or anyone who sins against God.

In Tobit 12:15, the angel who heals Tobias reveals himself as “Raphael, one of the seven who stands before the Lord.” It shouldn’t be surprising that Raphael means “God has healed.”

The name of the archangel Gabriel, who seemed to be in charge of affairs pertaining to the birth of Christ, means “God is my strength.”

Surrounding Christ’s birth, the angel Gabriel instructs Zechariah to name his son “John,” and instructs both Mary and Joseph to name Mary’s son, “Jesus”.  It should be interesting that when Gabriel addressed Mary he said, “Hail, pleres charitos.” The English translation of the Greek means “Full of grace.” It is interesting because after the word “Hail” is usually the name of the person.  For example Hail, Ceasar! Or Heil, Hitler. For Mary, the angel does not address her by her name. Instead, the angel calls her “Full of Grace.” In the encyclical Redemptoris Mater, Saint Pope John Paul II tells us that “Full of Grace” is God’s name for Mary.

In the case of St. John the Baptist, his parents, Zechariah and Elizabeth, suffered shame and humiliation for many years. For Jews being barren is a punishment from God. This is particularly embarrassing for Zechariah because he is a priest, and for Elizabeth because she comes from a priestly tribe. So when the angel gives instructions that their son’s name is to be John, they understand that “God is gracious” for that is what the name means. God is gracious because they were given a son and all their humiliation is blotted away.

Finally, we come to the name of Jesus – a name that the angel Gabriel instructed both Mary and Joseph to name Mary’s son (Luke 1:31, Matthew 1:21). In English it means “God saves” but that is a very weak translation. The literal translation means “Yahweh saves.” This is interesting because Pope Benedict XVI explains that this “completes” the name God gave to Moses in Sinai. 1 In Jesus, God’s name is not just Yahweh, but Yahweh Saves. The Catechism explains that the name expresses both his identity and mission.2  It means the revelation of God is completed in Jesus (John 17:26)  and there is “no other name given to the human race by which we are to be saved”. (Acts 4:12)

The completion of God’s name should remind us that if Yahweh saved the Israelites from the bondage of the Egyptians, crossed the waters of the Red Sea to kill the enemy, and crossed the waters of the Jordan into Canaan, the “promised land”; then Jesus or “Yahweh saves” – who bears the complete name of God – frees us from the bondage of sin and kills death as we “cross” the waters of baptism into the Church – that new “promised land” if you will. Baptism does all these. It brings us into the Church and provides us the graces to combat sin and temptation.

So the name of Jesus is a powerful name. It is central to Christianity. Evil spirits fear it!3 It is the name in which the Father grants what we implore. It is in his name the disciples performed miracles. It is the high point of the “Hail Mary.” It is through his name we perform a perfect sacrifice in the mass.

Use it with reverence, then. Remove it from secular expressions for it contains the name of the Lord, “Yahweh”, which we are explicitly asked not to defile in the Second Commandment. Say the “Jesus Prayer” by simply repeating it reverently. It is a sacramental: “To pray ‘Jesus’ is to invoke him and to call him within us. His name is the only one that contains the presence it signifies.”4

The IHS monogram seen above is derived from the Greek word for Jesus, ΙΗΣΟΥΣ . It can be seen in early Christian art as evidence of the veneration of Jesus’ holy name. So we celebrate this day to remind ourselves of this holy name.

God Jesus Salvation
Share this Post:
Previous Article
Is God stupid?
Next Article
Where did celebrating in graves come from?