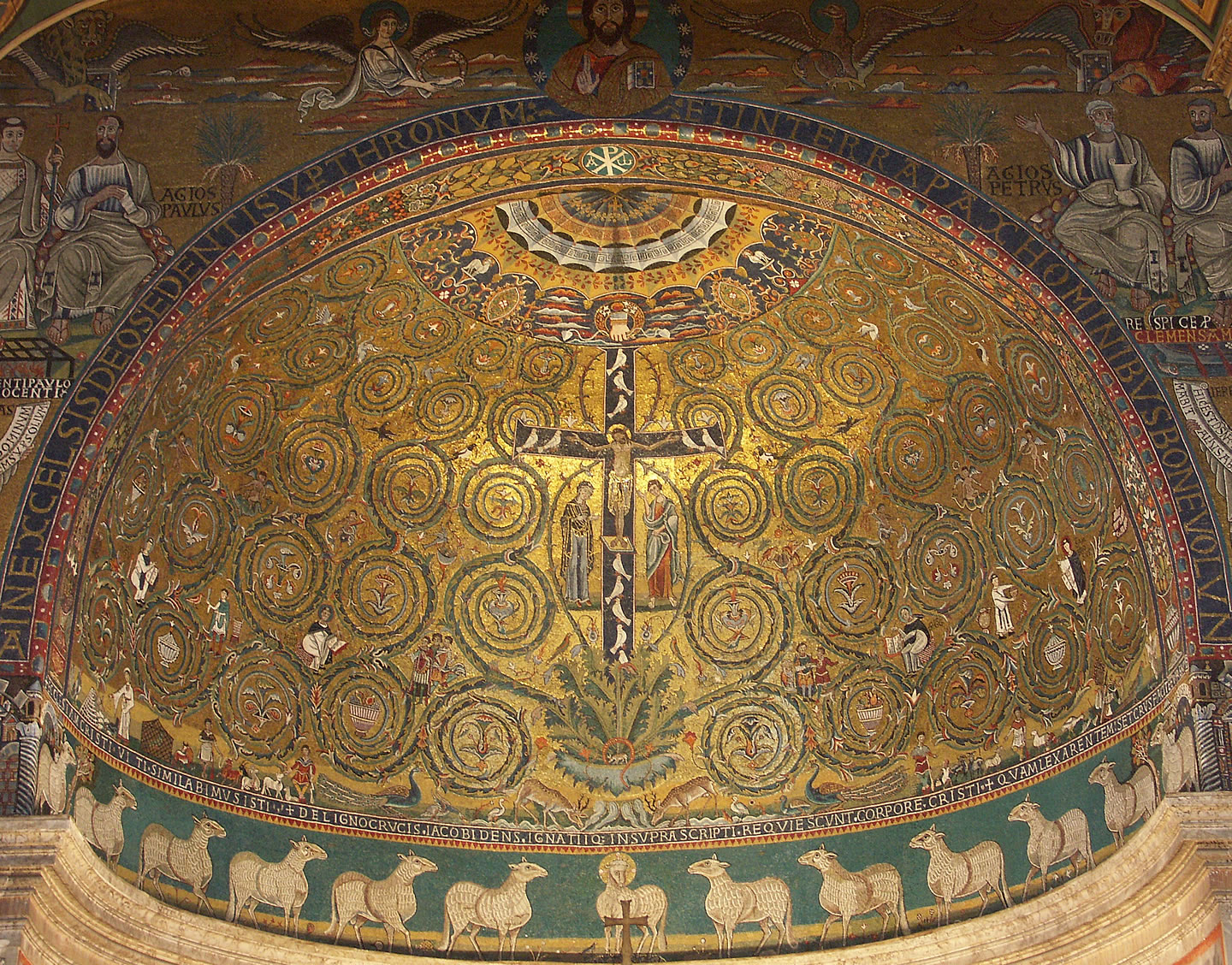 The origin of the mosaic is steeped in uncertainty. There is no documentation of who made it and when it was finished. The date and artist we have here are the results of a consensus. The only thing we know for sure was that the Basilica was dedicated to Pope St. Clement – the third pope after St. Peter. There also is no actual name for the mosaic. It is referred to as “the mosaic in the apse of St. Clement’s Basilica.” However, also by consensus, it is also referred to as the Tree of Life.

The mosaic is drenched in so much symbolism, that it will take chapters to discuss them all. So let us narrow our focus on the central meaning, and that is the Church is the Mystical Body of Christ.

During the Last Supper, Christ said:

I am the true vine, and my Father is the vine grower.
Remain in me, as I remain in you. Just as a branch cannot bear fruit on its own unless it remains on the vine, so neither can you unless you remain in me.
I am the vine, you are the branches. Whoever remains in me and I in him will bear much fruit, because without me you can do nothing.
John 15:1,4-5

From this, the apostles understood that the Church Christ established is connected with him. It cannot live if it is separated from Christ just as a body cannot continue to live it if it separated from its head. Thus, the Church is perceived as the Mystical Body of Christ, and he is its head. When St. Paul – then an anti-Christian who was going to Damascus to arrest Christians – fell to the ground, Christ asked him: “Saul, Saul, why are you persecuting me?” (Acts 9:4) Christ used the word “me” to refer to his Church, thus indicating that he and his Church are one and inseparable.

In the middle of the mosaic is the crucified Christ with Mary his mother, and the apostle John.  The wood of the cross comes from a tree – the Tree of Life – below it that sprouts branches filling the entire apse. The Church is symbolized by this tree and its branches. Everything about it reminds us about the Garden of Eden, but this time, it is a new Eden. We read of Eden in the Book of Genesis. And just as it is in described in Genesis 2:10, we can see in the mosaic that beneath the tree emerge four rivers. We should not miss the serpent crushed by the cross. That, too, comes from Genesis 3:15. Because we see a vanquished serpent, we know this is no longer the original Eden, but a new one.

One of the things we must not miss is the wound on the side of Christ from where water and blood pour out. It is watering the Tree of Life beneath it. The interesting thing is that theologians have described the wound of the side of Christ as the source of the Church – the Bride of Christ (more on this later.) This last wound of Christ symbolizes the outpouring of Christ’s whole self for it is in this wound that all that remained of Christ was poured out. Nothing else was left to give. So as Eve, the bride of Adam, was formed when God opened the side of Adam to get a rib, so was the Church formed when the side of Christ was opened. [1] The crucifixion scene, therefore, is symbolic as well for Christ gave his mother to John (John 19:26) but not just to him personally, but as the representative of a fledgling Church. This is why we call Mary Our Mother for Christ made her the mother of the Church.[2]

The Tree of Life is mentioned in Genesis, but there is also a reference to it in the book of Revelation 2:22. There it is described as a tree whose branches are “a medicine for all nations.” In the mosaic, we see the four rivers of Eden emerge from the tree from where animals derive life-giving water. We see deer drinking from it, which is a reference to Psalm 42:2 “As deer longs for streams of water, so my soul long for you, O God.” This is another reference to the Church who, through its sacraments, nourishes the faithful. This is another way the Church is a “bride”. The word bride means “vessel of life” and the Catholic Church has the instruments – the sacraments – to aid us attain eternal life. [3]

The branches of the vine are all connected to one tree. This is another imagery of the oneness of the Church where all of its members are connected to one another. We call it the Communion of Saints. Those who are in heaven and whose souls behold God, those in purgatory who are assured of heaven one day, and those who are alive – we are all connected to one another. Death does not separate us from the Church or from one another. It is our communion in Christ – both figuratively and literally in the reception of Holy Communion – that we are interconnected. One interesting image in the mosaic is a peacock. It is an old symbol for the Catholic Church because of the mythology that the flesh of a peacock is immortal just like the Church of Christ will last forever.

[1] If we want to push the analogy further, the Church is “formed here” but yet lifeless like Adam until the Holy Spirit would breathe life into her on Pentecost, just as he did Adam.

[2] Not that Mary gave birth to the Church, but she became its “foster Mother”.

[3] The Church is careful to teach that salvation is a gift from God, so one is ultimately saved by God. However, Christ instituted a Church with sacraments to help our weakened nature in our struggle to attain eternal life. She is a hospital for sinners.