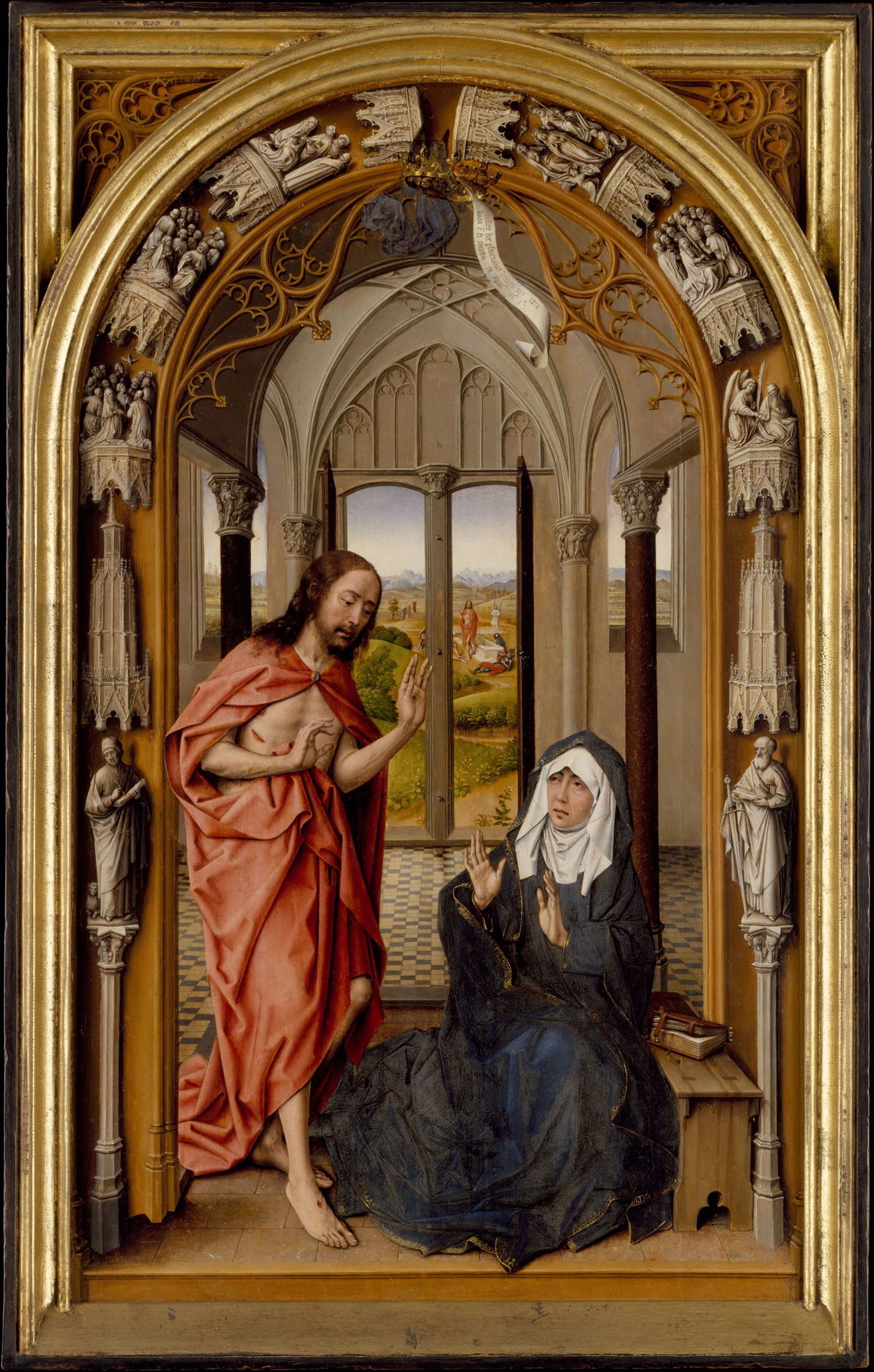 In the painting, Christ appears to Mary, his mother, immediately after his Resurrection (which we can see through the double doors behind them). The poses of Jesus and Mary remind us of the traditional poses of Gabriel and Mary in the Annunciation paintings. There are words found at the border of Mary’s cloak that come from the Magnificat. Above them, on the arch are sculpted scenes from Mary’s life. St. Mark the evangelist stands on the pedestal on the left (because a lion – the symbol of Mark is beside him) while St. Paul with his sword (because he said the Word of God is like a sword) stand on the pedestal on their right. The columns behind them have sculpted scenes showing typology of Christ’s victory over death. They are David’s victory over Goliath on the left, and Samson and the Lion, and Samson carrying the Gates of Gaza on the right. On the apex above, an angel carries a banner that reads: “This woman persevered, conquering all; therefore a crown was given unto her.(Revelation 6:1)”1

Although an old manuscript entitled Meditationes de Vita Christi (supposedly written by St. Bonaventure in 1478) mentions the appearance of the Resurrected Christ to his mother, it was never recorded in Scripture. Theologians point out that the intention of the Gospels is to prove Jesus was Christ and that he resurrected from the dead. Including a personal appearance to his mother would not have strengthened that case because there were no witnesses, thus, we can imagine it was excluded:

The Gospel does not relate the apparition thus made by Jesus to his Mother, whereas all the others are fully described. It is not difficult to assign the reason. The other apparitions were intended as proofs of the Resurrection; this to Mary was dictated by the tender love borne to her by her Son. Both nature and grace required that His first visit should be to such a Mother, and Christian hearts dwell with delight on the meditation of the mystery. There was no need of its being mentioned in the Gospel; the Tradition of the Holy Fathers, beginning with St. Ambrose, bears sufficient testimony to it; and even had they been silent, our hearts would have told it us.
Dom Gueranger, the Liturgical Year

As mentioned by Dom Guarenger, St. Ambrose who lived in between 340 and 397 A.D. already believed Jesus appeared to his mother. Tracing this even backwards, the earliest Church Father to accept this was St. Ignatius of Antioch who lived from 35 to 110 A.D. – just one generation from Christ – who was friends with St. Peter and St. John the apostle. Other writers along the years continue to accept this 2 and we find evidence of this in the naming of chapels, for example.  In the Church of the Holy Sepulchre in Jerusalem, there was a chapel dedicated to Jesus’ Apparition to his Mother. These were recorded by Daniel the Traveller (aka Daniel of Kiev), during his pilgrimage from 1106 to 1108. As another example, St. Mary’s Church, an Anglican Church in Fairford, Gloucester, UK, was built starting the 11th century and is known for its stained glass. One of them shows Christ appearing to his mother after the Resurrection.

It has even ingrained itself into the religious culture of some churches. For example, in the early dawn of Easter Sunday, a re-enactment of the Risen Jesus meeting his mother is still performed today in the Philippines. It is called the salubong, which means“welcome encounter.” There are at least three figures in this reenactment: Christ, Mary, and an angel. Other women mentioned in the Gospels are included depending on which province it is performed. Except for the angel that must be human, all characters are usually statues carried about by people. Mary is dressed in black with a (black) veil covering her eyes. Two processions start from different places: one with Christ, and the other with Mary (and the other women). The separate parades come closer together until they meet. The angel, usually suspended by a harness, is then lowered and removes the veil of Mary, symbolizing the end of her grief when she finally sees her resurrected son. To further emphasize this joy, the black dress of Mary is usually turned inside-out to reveal a resplendent shimmering gold gown.

Different towns in Spain, Brazil, Mexico, and Peru also have their version, which they call Encuentro – or Encounter. The “plot” is the same: Mary starts from one end of the procession, while the risen Christ on the other. They come closer and meet in the middle. One town has a truly unique version of this: they hold a race! The risen Christ is on one end, while different groups carry a statue of Mary running up the street to meet Jesus – a way of showing how Mary, in haste, was so happy to see her son.

(Encuentro in Spain, where Mary runs to her son upon seeing him.)
(Encuentro in Mexico, where the Philippines most likely got this custom through the Galleon trade.)

From these, we can see that the concept of the risen Christ meeting his mother is not only in writing, in art, but also in the way people celebrate religious festivities. But how did we get the notion that Christ appeared to his mother? The scholars like to point out that Christ was no longer in the tomb when Mary Magdalen went there during the first hours of Sunday. The nagging question is where did he go so early in the morning? Considering the situation, the scholars’ answer, is that Christ appeared to his grieving mother to console her as soon as possible.

And why was it that our Saviour rose from the Tomb so early on the Day He had fixed for His Resurrection? It was, because His filial love was impatient to satisfy the vehement longings of his dearest and most afflicted Mother. Such is the teaching of many pious and learned Writers; and who that knows aught of Jesus and Mary could refuse to accept it?
Dom Gueranger, the Liturgical Year, vol. 7, “Easter Sunday: Morning”

It also answers another nagging question: why didn’t the Blessed Mother go to the tomb? She was with him in the Passion all the way to his death and entombment, but the important anointing for his burial was interrupted because it was Preparation Day for the Sabbath and they had to put him inside the tomb right away. The natural thing to do was to go to the tomb the next available day – Sunday – to attend to the body. So why didn’t she go and attend to her son’s body? The peculiar thing is Scripture is oddly silent about the Virgin Mary’s whereabouts. She wasn’t with Mary Magdalene or the other women. After the apostles found out the tomb was empty, she wasn’t with the apostles and disciples rushing to the tomb to check if Mary Magdalen’s news was true. The answer to all these questions, if we consider that Jesus had already visited her, is that she already knew he had risen so there was no need to further anoint a body that  she already knew wasn’t in the tomb.

Could not the absence of Mary from the group of women who approached the tomb at dawn constitute an indication that she had already met Jesus?
John Paul II, 21 May 1997

There is no absolute teaching about Christ’s apparition to his mother after the Resurrection. In fact, we don’t need one because whether he did or he did not does not change any doctrine that was handed down to us. Because it is not dogmatic, but only just a consensus among some theologians, there is no heresy if we believe or not that Christ appeared to his mother. This painting, however, reveals that some believe that it happened through some logical analysis. I, for one, tend to agree with these theologians because I ask myself: how could Christ not appear to the mother he loves only to leave her grieving?

[1]  Due to difficulty in reading the text on the banner, it  is most likely from Revelation 2:10

[2] “The Resurrection of Christ Our Lord. His First Apparition” …
105. Christ’s apparition to Mary is not found in Scripture, but it is an opinion prominent in a long tradition of Christian writers. It is found in ch. 70 of the Life of Christ by Ludolph of Saxony, and Ignatius may have accepted it from him.  Ludolph cites testimony from Sts. Ambrose, Anselm, and Ignatius of Antioch.  Cusson lists some twenty writers who held this opinion, including Sedulius, Paulinus of Nola, Albert the Great, Bernardino da Siena, Maldonatus, and Pope Benedict XIV (BibThSpEx, pp. 303-304) Ignatius of Loyola: The Spiritual Exercises
By IGNATIUS OF LOYOLA, George E Ganss, Paramanda Divakar, Edward J. Malastesta, Page 417