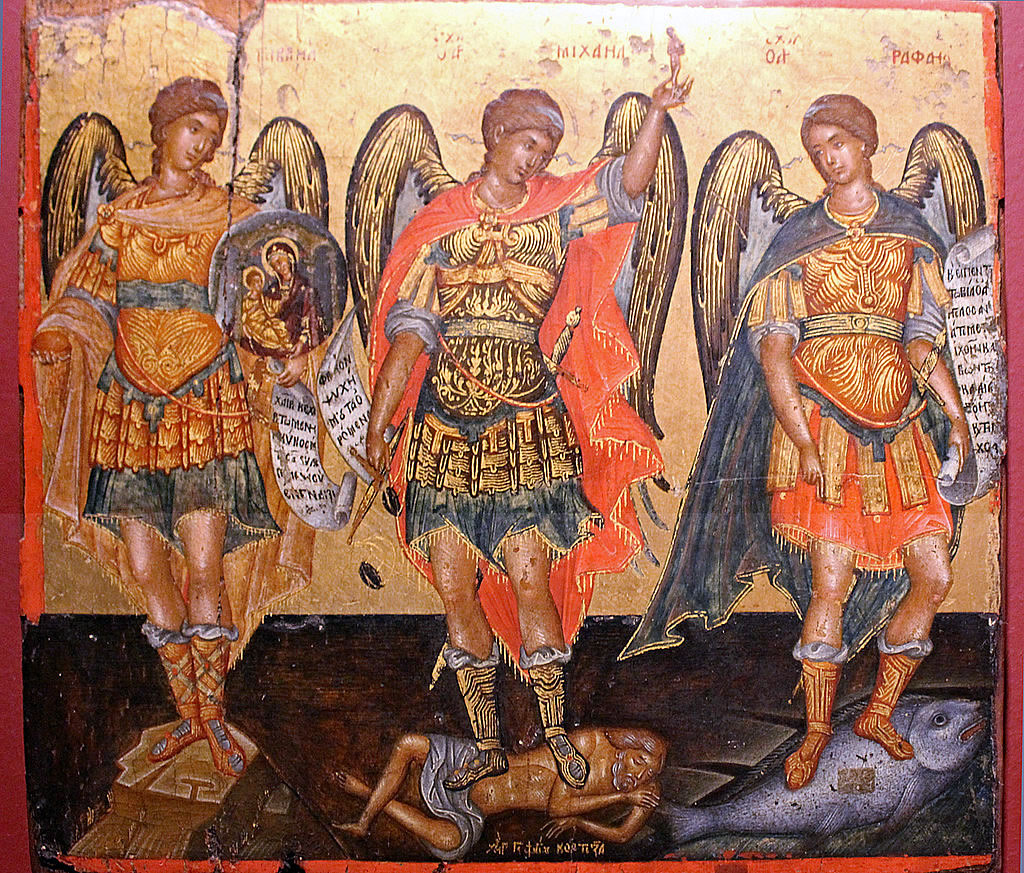 The Bible reveals the name of three angels: Gabriel, Michael, and Raphael. In this icon by Georgios Korteza, we will explore how they are depicted, which in a way reveals how Christians have thought of them.

On the left is the archangel Gabriel. He is usually depicted holding a sphere with a symbol of Christ. In this icon, the sphere contains an image of Mary and the baby Jesus. This is a very visual way of illustrating how Gabriel’s province is the birth of Our Lord. He was the one who announced to Zechariah the coming of Christ’s forerunner, and he was the one who announced to Mary that she would conceive. This goes hand-in-hand with the scroll he is holding that says, “Hail, Full of Grace, the Lord is with you, blessed are you among women, and blessed is the fruit of your womb.”

He is seen standing on a mountain with a cut. Most art scholars interpret this to come from the Book of Daniel: “While you watched, a stone was hewn from a mountain without a hand being put to it...” (Daniel 2:34) Saint Augustine and Saint Irenaeus (Augustine’s Exposition of the Psalms, and Irenaeus’ Against Heresies) interpret this stone cut from a mountain to be the virginal conception of Christ without a human father. Since it was the angel Gabriel who appeared to Daniel, we once again have a connection of the angel to the coming of Christ.

There is a consensus among theologians that when Satan pronounced his rebellion, Michael put him in his place by saying, “who is like unto God?” (which is what his name means) In the way we speak today, it can be rewritten as, “Who do you think you are? Do you think you are God?”

In this iconography, we see a sword in a scabbard. It shows how he is the prince of the heavenly army of Christ. We also see three things that aren’t usually in the depiction of Michael. The first is a scale he is holding with his right hand (our left), he is standing on a dead human body, and he is holding up a baby in his left palm. This comes from an old idea that when we die, it is Saint Michael who will “weigh” our souls. Christ is the judge, of course, but in this idea it is Michael who does the weighing for Christ to judge. This brings us to another belief that it is Saint Michael who ushers the soul of the dead, and his or her guardian angel, to the destiny Christ has judged it to go. This is why Michael is seen here, at the moment of a man’s death, taking his soul in the form of a baby. This ties up nicely with the words on the scroll he is holding, which says, “Tremble, my soul, at the sight, tremble all, brothers, at the bitter cup of death.”

In this icon, we see Raphael standing on a big fish whose story comes from the Book of Tobit. In that story, the fish leaped out of the river and was poised to devour a man. But Raphael told him to take the fish and take its heart, liver, and gall; which he did. In symbolic language, the “gall” meant medicine, thus, Raphael was teaching the man how to derive medicine out of the fish. This is what the scroll that Raphael says, “And the angel said to him, open the fish, and take the heart and the liver…” Altogether, the imagery and words on the scroll allude to Raphael’s connection to healing, which is what the name Raphael means.