After the Black Plague of the 14th Century the Dance of Death, also known as the Danse Macabre, proliferated in frescoes in churches. The usual characters are a pope, cardinal, bishop, king, queen, innkeeper, child, injured, knight, and merchant – in that order and in a dance with death represented by skeletons who are coming for them. In this fresco by Kastav, we don’t see all of the characters, and they aren’t in order. There are two things missing from this version, though: the first is a poem that is a verbal exchange between death and the characters, and the second is a narrator. Regardless, it still is a Dance of the Death. 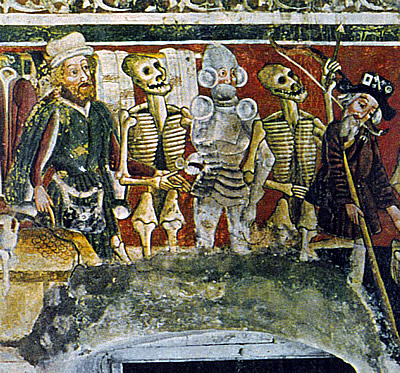 Kastav paints the merchant, on the far left of the fresco, trying to bribe death.

The morbid dance is actually an allegory of the idea that death spares no one. No rank is spared, not even the pope who has the authority to loose and bind. Age has no influence over death – the fragility of a child does not weaken death’s resolve to take it. Wealth is not a factor as we can see the merchant on the far left trying in vain to bribe death with money. Even the king and queen are called by death when he tells them:

Death, therefore, is the great equalizer and we must all go through it. Walls of Churches served as the facade where the Dance of Death was painted on because it served as a memento that we all must die. It is theological in a sense because it is a stark reminder that our life on earth is borrowed time and we should make the most of it by loving our neighbors and building up the Kingdom of God. It is also a declaration that we do not own our life, and God is its author.

The Church likes to remind us of death not to scare us, but so we can prepare for our life after death. Our immortal souls live on, and one day our bodies will resurrect and reconnect with our souls – for we were made to live with God with both body and soul forever. (It was only because of the unfortunate case of Original Sin that caused our bodies to die.) With this in mind, we want to secure our place with God by doing good things today. 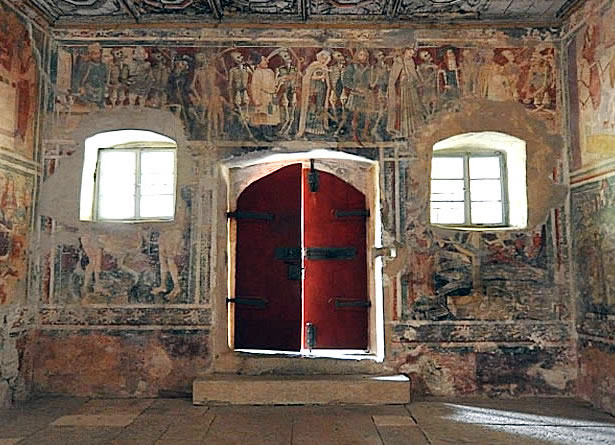 The Dance of Death is strategically placed above the exit door in St. Mary of the Rock’s church,
to remind people to spend their time wisely.

Our actions do not buy salvation for Christ has already done that. However, when Christ returns and judges us individually in front of all people (Matthew 25:31-46), the true evidence of inner faith is our outward actions. He did say you can judge a tree by its fruit. (Matthew 7:16)

Another way of looking at it is we will be judged on how we spent our time; it is the currency of life. By thinking we have limited time, it instills in us a sense of urgency for death might invite us to his dance at any time. It drives the imperative to do good things now while we can. Unfortunately, we procrastinate doing things because we think we have so much time.  We should take Mary as our example. When she learned from the angel Gabriel that her cousin Elizabeth was six months pregnant, scripture tells us that “she went in haste.” (Luke 1:39) Scripture alludes that she helped Elizabeth until childbirth for she stayed there three months at which time Elizabeth was full term and ready to give birth. So quick is Our Lady to run and help without regards for herself despite her young age (scholars would put her somewhere between 12 and 14 years of age.)

Sadly it would seem that the modern era finds the Dance of Death too macabre because we no longer see this type of painting in churches. In fact this fresco in St. Mary’s of the Rocks was painted over during a renovation in the 18th century. Luckily it was found in 1913 and restored as much as professional artisans could. Today nobody wants to think of death, but maybe we should do so once in a while, just to realign ourselves to a good afterlife, do good things now, and remember to thank God for the time we have.