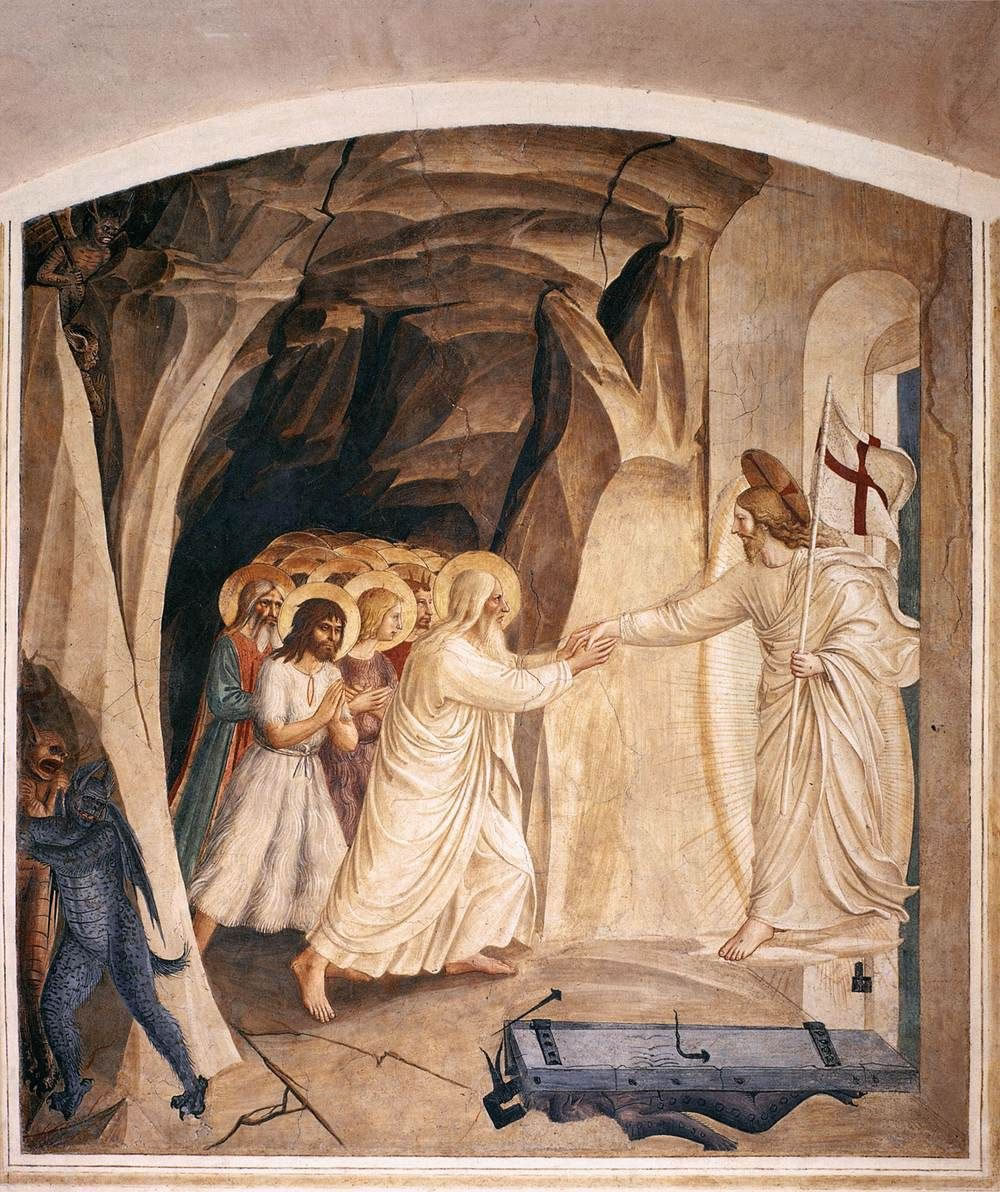 In every mass we profess our Faith when we recite the Creed. Part of it proclaims that Christ descended to the dead. This painting by Fra Angelico reflects our understanding of Christ’s immediate activities after his death on Good Friday.

We believe that when Adam and Eve were created, God endowed them with original holiness and justice so they could live with him. Because we are not of the same nature as God, we can’t “live” with him the way he does. So he gave us a gift called Sanctifying Grace so we can participate in his life. (ccc 2000) A good analogy is that our human nature is different than from fish, and we cannot possibly live with them under water the way they do. However through a SCUBA gear, we are allowed to do that. So unless humans have sanctifying grace, we can’t live with God. Unfortunately, when Adam and Eve fell from grace, they lost sanctifying grace (because it was not part of human nature but a supernatural gift – a gift above our nature –  to perfect it), and all of their children down the generations inherited their human nature, which lacked this very important gift.

When Christ was obedient unto death, he restored sanctifying grace for those who want to receive it. For Catholics we believe this is normally received during baptism where sins are forgiven and sanctifying grace is restored. But what happened to all those good men and women who died before Christ’s death? They couldn’t go to heaven because Christ had not opened its gates yet – figuratively speaking, of course. They languished in the abode of the dead called Sheol, or Hades. It is not a place of punishment, but we can think of it as a prison for good people who do not belong there. Since they could not go to heaven and be with God (yet) they were stuck in that state. That is the place where Christ went when we say in the Creed: “he descended to the dead.” (ccc 633)

The Apostle’s Creed – an older and shorter Creed – uses the words: “he descended to hell.” It is imperative to remember that “hell, in this context, is not the place of the damned. Instead, it refers to Sheol. Because “hell” was deemed as a deprivation of God, this word was used correctly here but only in that context – not in the sense that the souls were eternally separated from God.

So in this painting, we see Christ had entered into Sheol, which is depicted as a cave with a gate to imprison those who have entered the realm of the dead. It is almost like a dark and gloomy tomb whose only light is that of Christ who entered it, not to be trapped inside, but to let out its captives. Interesting that when Jesus began his public life, he read the words of Isaiah:

He unrolled the scroll and found the passage where it was written in Isaiah:
“The Spirit of the Lord is upon me,
because he has anointed me
to bring glad tidings to the poor.
He has sent me to proclaim liberty to captives
and recovery of sight to the blind,
to let the oppressed go free,
and to proclaim a year acceptable to the Lord.”
Luke 4:17-19

In the painting we see the gate forcibly smashed open, presumably by Christ. He has a glorious body. It is glowing (and should remind us of the Transfiguration), and he is floating on clouds – it is definitely not an ordinary body. With his left hand he holds a banner with an insignia of the cross since the cross is the ironic instrument of his victory over death. (More on this exciting tidbit in bit.) He is holding out his right hand to usher out Abraham who is usually depicted as an old man with a long white beard. Interestingly, Sheol is also known as The Bosom of Abraham. Behind him are Adam and Eve in clothes that appear to be made of grass. Behind them on the left is Moses depicted by the rays shining from his face. And behind them on the right is King David depicted with a crown. They represent the men and women of those countless others behind them whose faces we can’t see, all of whom are righteous symbolized by the halos on their heads.

Because the devil maliciously caused Adam and Eve to sin, physical and spiritual death was the result in human nature. This is why we say God is the author of life; and the devil, of death. So here in this fresco, Fra Angelico paints the devil crushed under the door as a symbol of Christ’s victory over death. It should remind us of God’s promise to the serpent in the Garden of Eden:

The painting presents the foremost paradox of Christianity. The devil brought death into the world of humans, and through their malice, they caused evil people to crucify and kill Jesus not knowing that it is the death of Christ that will defeat them. The poetry is genius too! Christ died and wrestled with death in its own abode and ends up victorious for he is true God. It ushers a new era in human history: finally death no longer has power over humans for Jesus is truly human too.

Two other devils, on the left foreground, are scampering away. They were not afraid of the humans they had trapped in Sheol, but this one – the Christ – it seems they have no power to subjugate. When a minister baptizes us with water, he immerses us underwater three times (or pours water over our head three times). It is a symbol of us dying with Christ – going down to the abode of death for three days. For it is only when we die with Christ we will see his hand there reaching out to take us out of death’s abode and resurrect with him. What the devils have done in the Garden of Eden, was undone in the Garden of Calvary where Christ was buried and where he Resurrected. They have all the reasons to scurry for they no longer have power over us as well – and that scares the hell out of them.