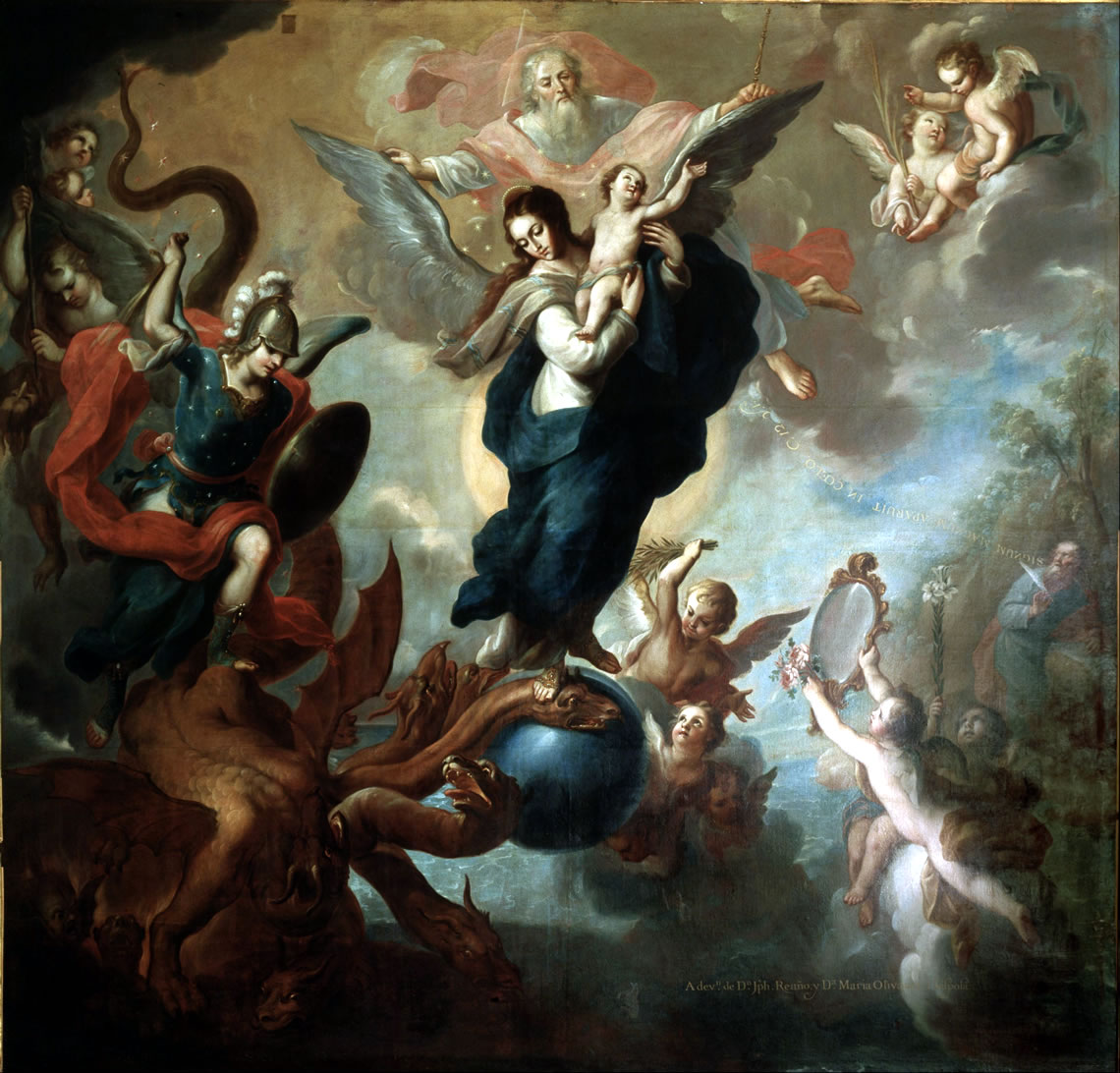 Paintings and statues of Mary often depict her crushing the head of a snake. It is an allegory of her participation in the defeat of evil. In the book of Revelation (otherwise known as Apocalypse), the author describes a woman clothed with the sun, and the moon at her feet, wearing a crown of twelve stars. The text continues to tell us that a dragon was poised to devour the child of the woman, but a battle ensued, and St. Michael cast the dragon and his angels out of heaven. (Revelation 12:1-8) This is the image that Miguel Cabrera depicts in his painting. He even adds wings to the woman to reflect verse 14, which says the woman was given two wings.

It is interesting that Cabrera paints the woman as Mary and shows her crushing the head of the dragon when these are not specifically stated in Revelation. These, of course, is a reflection that Catholics believe Mary’s participation in God’s plan thwarted the effects of the fall.

Before going any further, it will do well to describe the painting first. It is hailed to be one of the outstanding neo-Hispanic works of the 18th Century. In the center is “the woman” who twists her body so that her child is as far away as possible from the dragon. While the woman can be an allegory for the early Christian Church, it can also be an allegory for Mary – as Cabrera does here. We know the woman is depicted as Mary here because of the three Marian symbols on her lower right. First is the Mystical Rose, which symbolizes her participation in the plan of the Blessed Trinity in saving the world. Second is the mirror, which symbolizes wisdom. (In the Book of Wisdom, wisdom is associated with “Fear of God.”) And, third, the Lilies, which symbolize purity. They are shown here as Mary’s weapons against the evil one.

Above the woman is God the Father, here depicted with an equilateral triangle on his head, which is a symbol for the Blessed Trinity. On the left is Saint Michael armed with a sword that is in a position to strike the dragon. On the extreme right is St. John the evangelist uttering: “Signum magnum a paruit in cielo” (I saw a great sign appear in the sky) – the opening phrase of Revelation 12. We know it is St. John because there is a faint Eagle beside him. Each of the Evangelists has a symbol associated with them: a man for St. Matthew because he starts with the human genealogy of Christ, a lion for St. Mark because he starts with John the Baptist “crying out in the wilderness” like a lion; a bull for St. Luke because he starts with the story of the high-priest Zachariah and bulls are a symbol for the sacrifice that a priest makes; and an eagle for St. John because it flies high like the Christology he starts with in his Gospel.

How does Mary, then, come about crushing the head of the dragon? Here is where it gets really interesting.

After the Annunciation, Mary went to visit Elizabeth after learning she was six-months pregnant. The first words of Elizabeth were: “Blessed are you among women...” (Luke 1:42) Where did that come from? No one just blurts out something like that unless she was under the influence of an unlawful substance. But Elizabeth was under the influence – not of drugs but of someone. The Gospel of Luke tells us she was filled with the Holy Spirit. (Luke 1:41) So it must have been the Holy Spirit who prompted Elizabeth to say something as odd, and wonderful as that.

I say this is really interesting because there are only three women called “blessed” in the Bible. One is Mary, and the other two are Jael, and Judith – and they crushed their enemy’s heads. In the book of Judges, the people of God were being fought by the Canaanite army lead by a man named Sisera. After his army was defeated, he escaped and fled to a settlement of Heber the Kenite. He was received by Jael, Heber’s wife, and after feeding him, he fell asleep. She then drove a tent peg through his temple with a mallet.

We can read about Judith in the Book of Judith (only found in the Catholic Bible). Once again, the people of God faced an enemy – the Assyrian army led by the sycophantic general by the name of Holofernes. When the tribe of Judith had feared the worst, she went to the enemy camp and told them, under a ruse, that she wanted to “defect” and will tell them what they need to know to defeat her tribe. Being a beautiful woman, she easily gained their trust and became close to Holofernes himself. One night, after an evening of drinking, Judith was left alone with Holofernes who passed out from too much alcohol. Using his sword, she decapitated his head and escaped back to her tribe.

These two “blessed” women destroyed the enemy’s leaders by crushing their heads quite literally. We cannot help but recall another crushing of a head in the Garden of Eden. When Eve succumbed to the lies of the serpent, God told it:

The book of Genesis is written in symbolic imagery, but the message the author wants to convey is that mankind lost his original justification. Whereas mankind was originally endowed with preternatural and supernatural graces; when man separated himself from God, these gifts were lost as well. Mankind broke his relationship with God, and did not have the grace needed to fight sin and the attraction to sin.

God had a plan to correct this, of course. The plan was to become man and slip in behind enemy lines as a non-threatening infant. But in his plan, the way to become human was to be born of a woman. This is why Mary was invited to be part of this plan during the Annunciation. The tenet of God’s relationship with man is free-will: he never imposes himself on us. This is why the Annunciation is seen as an invitation where Mary had a choice, rather than just an announcement where Mary had no choice in the matter.

It is her consent that allowed God to enter into time and space in our world. We know the rest of the story: Christ’s obedience to the Father undoes the disobedience of Adam. Christ bought back (redeemed) our relationship with God, and restored graces so we can fight our attraction to sin. Whatever corruption the devil caused in our nature during the Fall is no longer something we need to live with. Christ’s salvific actions has bought us the weapons if we participate in his graces.

While Christ’s obedience is important, so is Mary’s because her obedience also undoes the disobedience of Eve. We have to remember there was a tandem in the Fall, and there must be a tandem in salvation –“they will strike your head..” God told the serpent. It shouldn’t be surprising that the Hebrew word for “serpent” can also be rendered as “dragon”, which fits nicely in the imagery of the Woman of Revelation. It also shouldn’t surprise us that Christ called his mother “woman” in the Wedding at Cana, and also while hanging on the cross. It seems he is reminding us of Eve because “woman” is the title Adam used for Eve. It is the same “title” John uses to describe woman in Revelation.

Another title we have for Mary is co-redemptrix – someone who participated in God’s plan to redeem the world. What better way to illustrate than having her crush the serpent/dragon’s head. So like Jael and Judith who crushed the head of the leader of the enemy of God’s people, so did Mary.