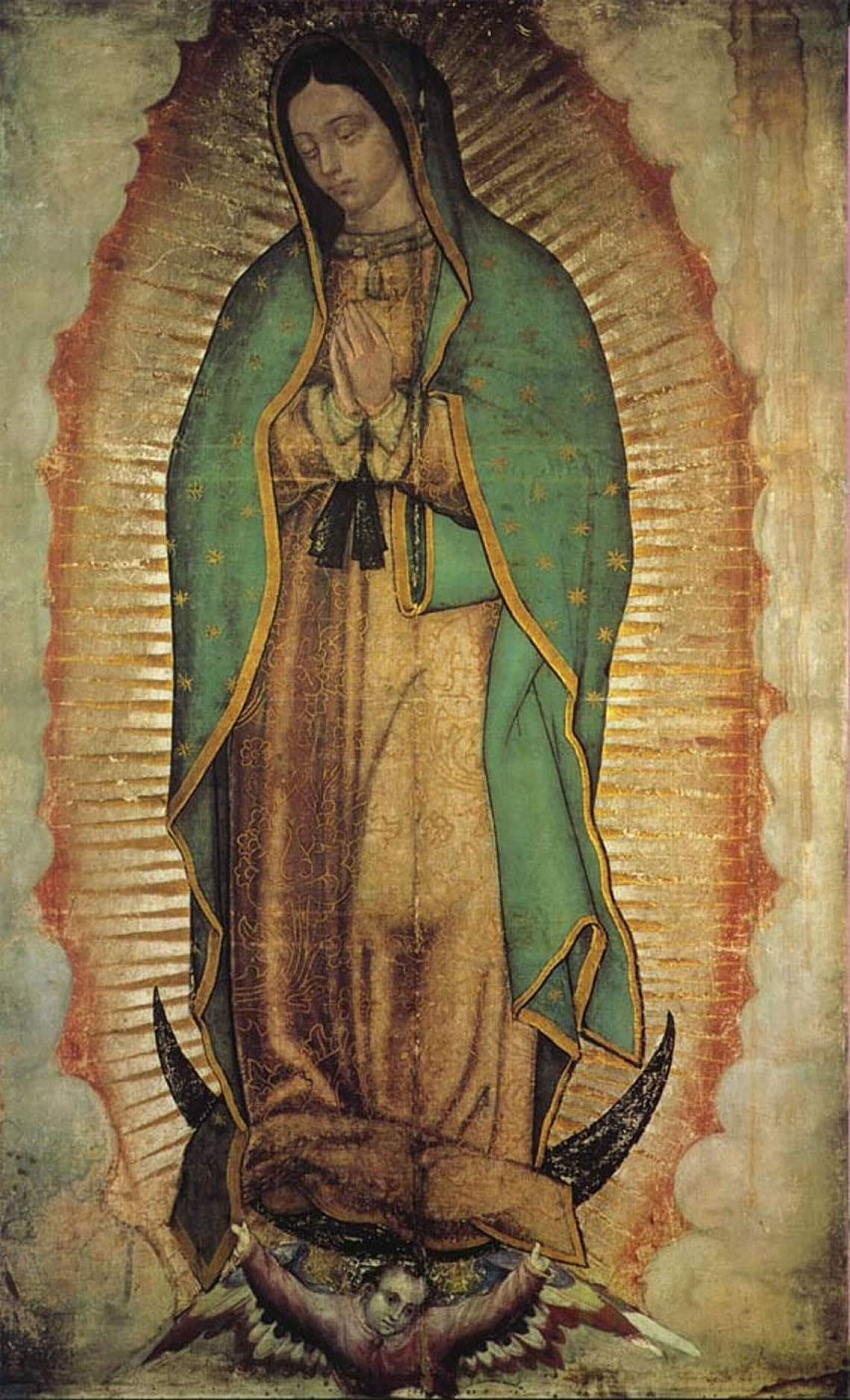 The image of Our Lady of Guadalupe is, technically, not a work of art, because there is no known author, and until now it is not known what material the image is made of. The story goes like this. The place is Mexico, and the date was December 9, 1531. It was a time when Christianity was just being introduced to the country, and the majority of native Mexicans were still making sacrifices to their local gods.

A man by the name of Juan Diego was on a journey through Tepeyac Hill, and there the Virgin Mary appeared to him. He was asked to go to the Archbishop to have a church built in her honor on the hill. The man obliged and did as he was told, but Archbishop Juan de Zumarraga told him to return to the hill and ask our Lady for a miraculous sign. Since bishops are tasked to determine if apparitions are true, this must have been one way to do this.

When Juan Diego returned to Tepeyac and told Our Lady of the bishop’s request, she told him to gather flowers there. He did so, and arranged them on his tilma – a cloak made of cactus fiber. He then made his way to the Archbishop where he opened his tilma so the flowers could gently fall to the ground where the Archbishop could see them. The Archbishop recognized the flowers are Castilian roses, which are not native to Mexico, and had no business blooming at that time of year. Then, in front of the archbishop’s eyes, an image of the Virgin of Guadalupe appeared on the tilma.

The tilma, together with the image, is on perpetual display in the Basilica of Our Lady of Guadalupe on Tepeyac Hill, in Mexico City. When scientists try to determine what caused the image, they are baffled. If anything should hint of its miraculous existence, it is the tilma itself. Fabric made of cactus fiber should disintegrate in less than 100 years, but the tilma is still in excellent condition today. So if the image is indeed miraculous, it should be important to glean into the symbolic meanings. After all it was from Our Lady.

Our Lady of Revelation: a New Eve

The most noticeable feature is that the woman is “clothed with the sun, with the moon under her feet.” We also see that a dark sash is wrapped around the woman’s waist, which at that time and place, signifies that the woman is with child. These jibes neatly with the book of Revelation:

A great sign appeared in the sky, a woman clothed with the sun, with the moon under her feet, and on her head a crown of twelve stars.

She was with child and wailed aloud in pain as she labored to give birth.

Then another sign appeared in the sky; it was a huge red dragon, with seven heads and ten horns, and on its heads were seven diadems.

Its tail swept away a third of the stars in the sky and hurled them down to the earth. Then the dragon stood before the woman about to give birth, to devour her child when she gave birth.

She gave birth to a son, a male child, destined to rule all the nations with an iron rod. Her child was caught up to God and his throne.

The woman herself fled into the desert where she had a place prepared by God, that there she might be taken care of for twelve hundred and sixty days.

Then war broke out in heaven; Michael and his angels battled against the dragon. The dragon and its angels fought back, but they did not prevail and there was no longer any place for them in heaven.

The huge dragon, the ancient serpent, who is called the Devil and Satan, who deceived the whole world, was thrown down to earth, and its angels were thrown down with it.

The woman can be a symbol of Israel who “gives birth” to the Messiah. But it can also directly symbolize Mary because her son is Christ, the king, who is symbolized ruling all nations with an iron rod, but first fleeing to the desert of Egypt. We must not miss the similarity of these verses in Revelation with the Fall in the Garden of Eden in Genesis. In the Garden of Eden, Eve battles with the serpent. It should be interesting that the Hebrew word for “serpent” can be rendered as “dragon.” Theologians, like Dr. Scott Hahn, remind us that Eve was not an ignorant girl who was easy to trick. We have to remember that she and Adam were endowed with the preternatural grace of infused knowledge. Everything they needed to know about the natural world was already infused into their mind when they were created. So when Satan was tempting her, she did put up a fight foreshadowing what we see in Revelation 12.

This, then, brings us to the idea that Mary is the new Eve. Wherein Genesis, Eve was attacked by Satan, and disobeyed God; Mary is the woman in Revelation who was attacked by Satan, and obeyed God by becoming the Mother of Christ. We are also reminded that in Genesis, God promised the serpent that the woman and her son would crush its head; and in the “fullness of time” this is fulfilled with Mary consented to be the Mother of the Messiah so Christ can be born to accept God’s will to offer himself as a sacrifice that would destroy sin and death’s hold on mankind, as well as unleash abundant graces.

Protector of All Her Children

A cloak has always been a symbol of protection. In Jewish and Mediterranean traditions, placing a baby in the parent’s mantel or cloak was a symbol of adoption. When a couple gets married, they are placed under a mantel, or veil, to symbolize the husband is taking the wife under his protection.

With that as a background, we should see Our Lady’s cloak as a symbol of her protection too. In the early thirteenth century, a Cisterian monk had a vision of heaven in a dream. There he saw monks of different orders. Perplexed, he asked Our Lady why there were no Cisterian monks in heaven – the Cisterians that were so devoted to her. Her reply was, “I love my Cisterians so much that I hold them with my arms,” opening her wide cloak revealing numerous Cisterians under it.

Since then Christian art has shown Our Lady’s cloak to grow wider and wider and wider so painters can paint more and more people inside it. Eventually, Christians realized the Our Lady includes everyone under her protection, and the only cloak large enough to contain all people is the sky. And that is why the popular color of Our Lady’s cloak is blue – to symbolize the sky.

In the image of Our Lady of Guadalupe, her cloak is blue with stars on it. It cannot be mistaken for anything else except the sky. In fact, when scientists inspected the stars on the cloak, they say that they form constellations that were in the sky at the time when the image miraculously appeared.

Catholics believe that Mary is the New Eve, and we are under her protection. These two things we can see clearly in the image of Our Lady of Guadalupe.