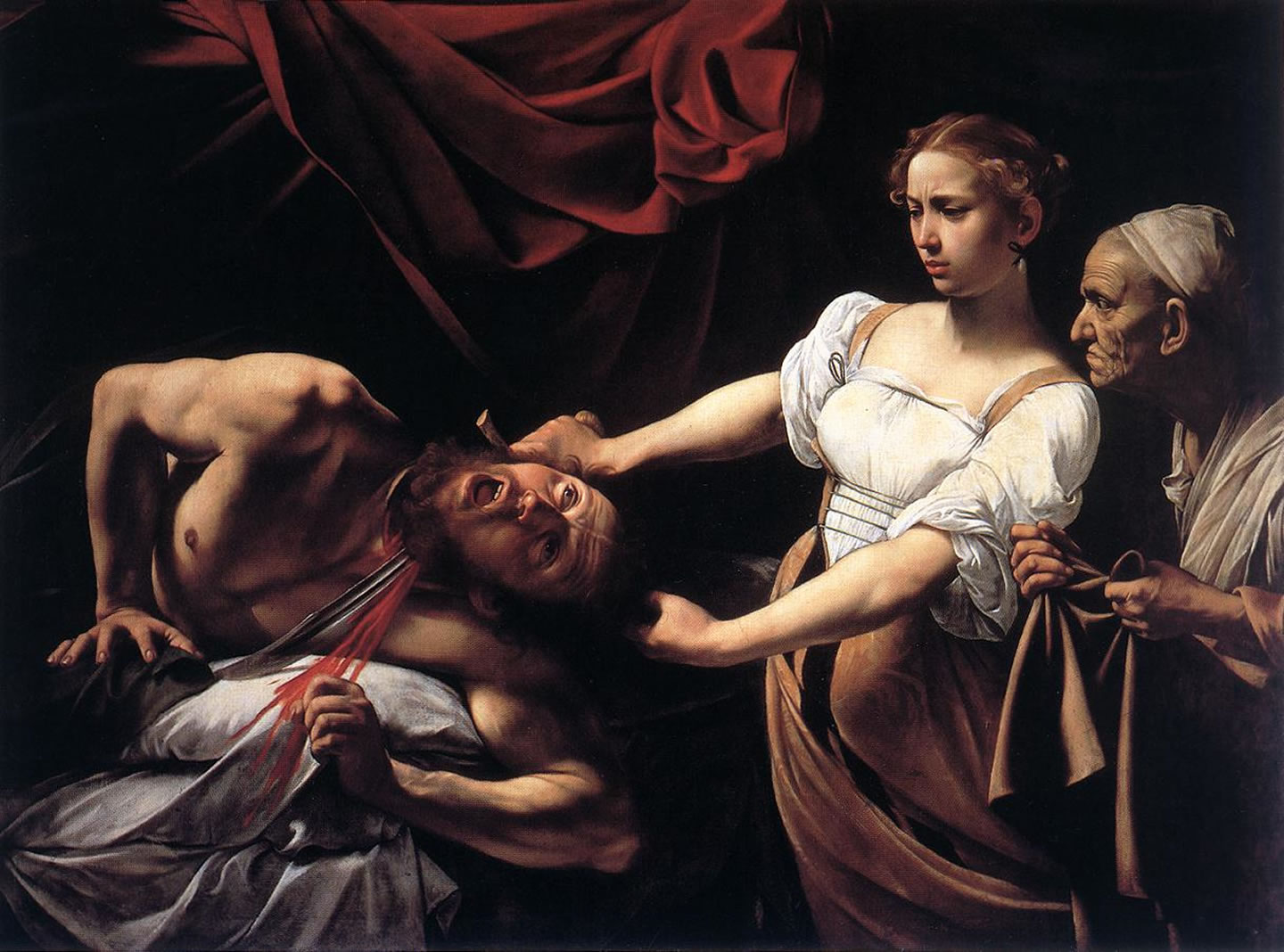 This painting by Caravaggio shows Judith decapitating Holofernes who is the general of an Assyrian army who was about to pounce on the Israelite village of Bethulia. She is an Old Testament heroine who is instrumental in saving God’s people. The story can be read in the book of Judith that can only be found in the Jewish Septuagint and Catholic Bibles. It is not only a story of female heroism but serves as typology to understand the role of Mary. The story goes like this...

King Nebuchadnezzar of Assyria wanted to wage war against an enemy King Arphaxad so he asked different lands to rally with him. Unintimidated, the lands humiliated him by not acceding to his request. He vowed vengeance against them when the time was ripe. Many years later he became more powerful and put a plan in motion to exact his revenge. He sent his troops, under the leadership of the greatly feared general Holofernes, to ravage these lands.

After subduing several cities, they camped by the town of Bethulia inhabited by Israelites and there they planned how to attack. During a war council, a man by the name of Achior warned them that the Hebrew God protected the Israelites when they were sinless, but allowed them to lose if they disobeyed him. Angry that a God can determine the outcome of his campaign, Holofernes released Achior to go to Bethulia admonishing them to worship Nebuchadnezzar as the only god.

Hearing what Achior had to say, Bethulia implored God’s protection. But when the Assyrians seized their water source, it cut off their life-source. They rationed water so food became scarce and soon there was little water for cattle and irrigation of their plants. Bethulia panicked as it got thirsty and hungry, and gave God a deadline for his help.

A god-fearing widow by the name of Judith spoke to the leaders and told them that they should not give God conditions. Instead, she asked that she be allowed to go to the Assyrian camp with her maid. This, they did. Before leaving, however, she transformed her grieving widow appearance into one of beauty. She wore her fineries – complete with a diadem (crown) – and looked alluringly beautiful to anyone that beheld her.

As she approached the enemy camp, soldiers accosted her, but she told them she was fleeing from her people. She said if she could talk to Holofernes, she would tell him where to pass and how to defeat them. Stunned with her beauty (and probably no longer thinking straight) they led her to the general.

Upon seeing Judith, Holofernes was taken by her beauty. We are later told that he wanted to seduce her from the moment she saw her. She explained that the people of Bethulia, who were hungry and thirsty, were ready to eat what was reserved only for God. It was sinful! When that happens, the Assyrians can surely defeat Bethulia for God will not be with them; and she would tell him when that time came. The only thing she asked for is to be allowed out of the camp with her maid every night so she can pray.  Holofernes (also probably no longer thinking straight) swallowed her lies and allowed her to do so. So for three nights, Judith and her maid stayed in a tent that was allocated for her. And every night the guards allowed her to leave the camp to pray in private.

On the fourth night, Holofernes asked her to join him in a banquet of food and wine in his tent. Wanting to be alone with her, he did not invite his officers. Only maids and servants attended them. Taken by her beauty, he prolonged the banquet to a point that Judith was alone with him because all the servants were tired and went to sleep.  After Holofernes was passed out from all the wine he drank, she took his sword and with two blows cut off his head. She passed the head to her maid who put it in a bag. Then, as they would do every night, they were allowed out of the camp to“pray".

Judith went back to Bethulia and showed the head to the leaders. She told them to feign an attack the next morning so that the Assyrian camp will wake up and look for Holofernes. She said that when they realize he is dead, they will panic and that will be the time to strike. They did as she said, and the army was defeated.

One important episode in this story is that Uzzia, the head of Bethulia, said to her:

Blessed are you, daughter, by the Most High God, above all the women on earth; Judith 13:18

This echoes a similar story in chapters 4 and 5 in the Book of Judges.  The Canaanite King, Jabin, had a general named Sisera who had been oppressing the Israelites for over twenty years. When the Israelites begged God for help, the prophetess Deborah was inspired to talk to Barak, their leader, to give him instructions. He was to attack Sisera at a certain location, and God would deliver the enemy to them. But, Deborah, told Barak, “but you will not gain glory for the expedition on which you are setting out, for it is into a woman’s power that the Lord is going to sell Sisera.” (Judges 4:9)

What Deborah said came true. And when the army of Jabin was being defeated, Sisera escaped and fled. He ended up in the “friendly” Kenite territory of Jael, wife of Heber, who offered him refuge in her tent. He accepted the invitation and she made him comfortable by giving him milk and putting a rug over him. But when Sisera was in deep sleep from exhaustion, she put a tent peg on his temple and with a mallet hammered it so that the peg went through his head and into the ground beneath it.  This started the defeat of King Jabin, for without Sisera he was eventually vanquished. The Israelites finally became free from the evil King Jabin.

There is also a similar episode in that story wherein Jael is praised by Deborah through a song: 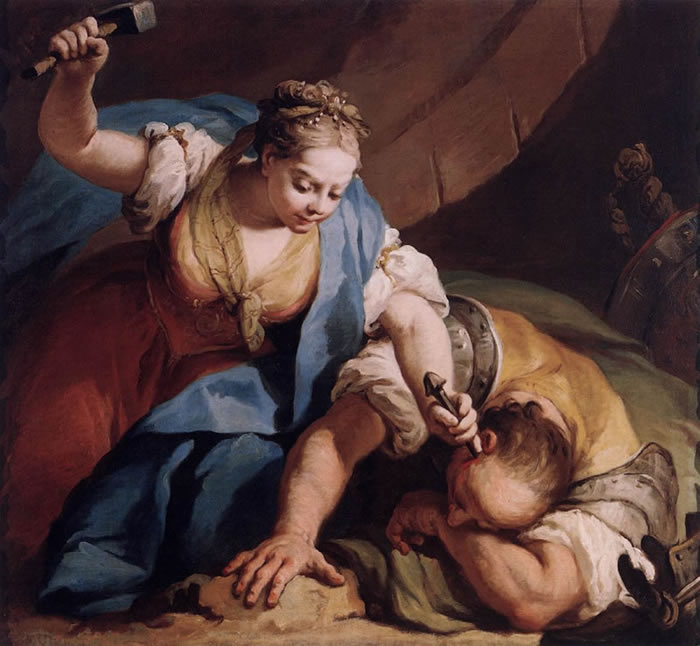 In Scripture, there are only three women called “blessed” and this brings us to Mary who is also called “blessed.” After the Angel Gabriel announced to Mary that she was to be the mother of the Messiah, she made haste to visit her cousin Elizabeth who exclaimed:

Most blessed are you among women, and blessed is the fruit of your womb. Luke 1:42

It would seem that Mary had not done anything yet to warrant the title “blessed” the way Jael, and Judith were. But this is where it gets interesting. Jael and Judith crushed the head of the enemy general, and soon after their enemies were vanquished. So Jael and Judith did not themselves defeat the enemy but did something instrumental so that total defeat would be the end effect. But what did Mary do? We read nothing like what Jael or Judith did, or did we?

Just a few verses before the visit to Elizabeth, we read in the Gospel of Luke that Mary accepted the invitation of the Angel Gabriel to be the mother of the Messiah. We have to remember that one of the roles of the Messiah was to battle and defeat the enemy of God’s people. At that time, it was the Romans, but in a larger sense, the real enemy was the devil who is the perpetrator of all evil, suffering, and death.

The devil caused the Fall of mankind in the Garden of Eden by tempting Adam and Eve to disobey God. But God promised that a man and a woman shall destroy him:

I will put enmity between you and the woman,
and between your offspring and hers;
They will strike at your head,
while you strike at their heel.

So when Mary agreed to bring forth the Messiah, the Second Person of the Trinity was incarnated in her womb and initiated what was to be the total defeat of Satan. At that point, she had already crushed the head of Satan just like Judith and Jael had done. Her son, Jesus Christ would finish off the enemy through his own death and resurrection. (If we were to follow the typology even further, Holofernes was killed by his own sword. Death came into the world through sin – the work of the devil. And it is through the death of Christ the devil’s works, death itself is destroyed. Related to that, when we read of David beheading Goliath, we can see King David as a foreshadowing of Christ who will crush the head of God’s enemies.) 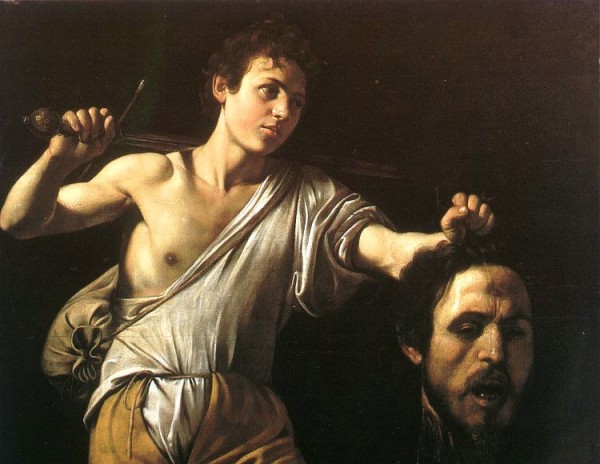 David and the head of Goliath. Caravaggio. Kunsthistorisches Museum, Vienna

So, what relationship with God was damaged by Adam and Eve in the Garden of Eden through disobedience, would be restored by the obedience of Mary, and Christ – the new Eve, and the new Adam – in Calvary, which we are told was also had a garden1. Salvation history is undeniably poetic in so many levels.

It should not be surprising that artists have drawn Mary crushing the head of the serpent. Artists would sometimes place an apple in the serpent’s mouth to remind us that this is the same devil (which means “enemy”) in the Garden of Eden is the same enemy of God’s people today. He is already vanquished, but we have to die with Christ to resurrect with him. 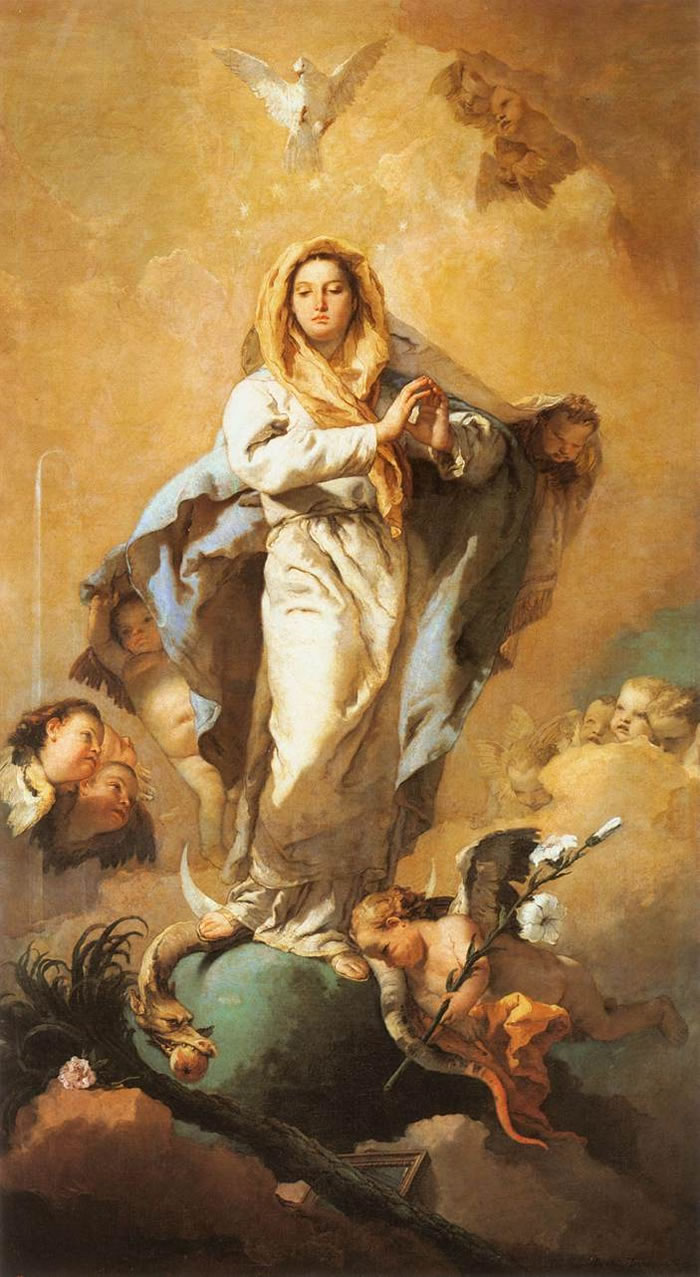