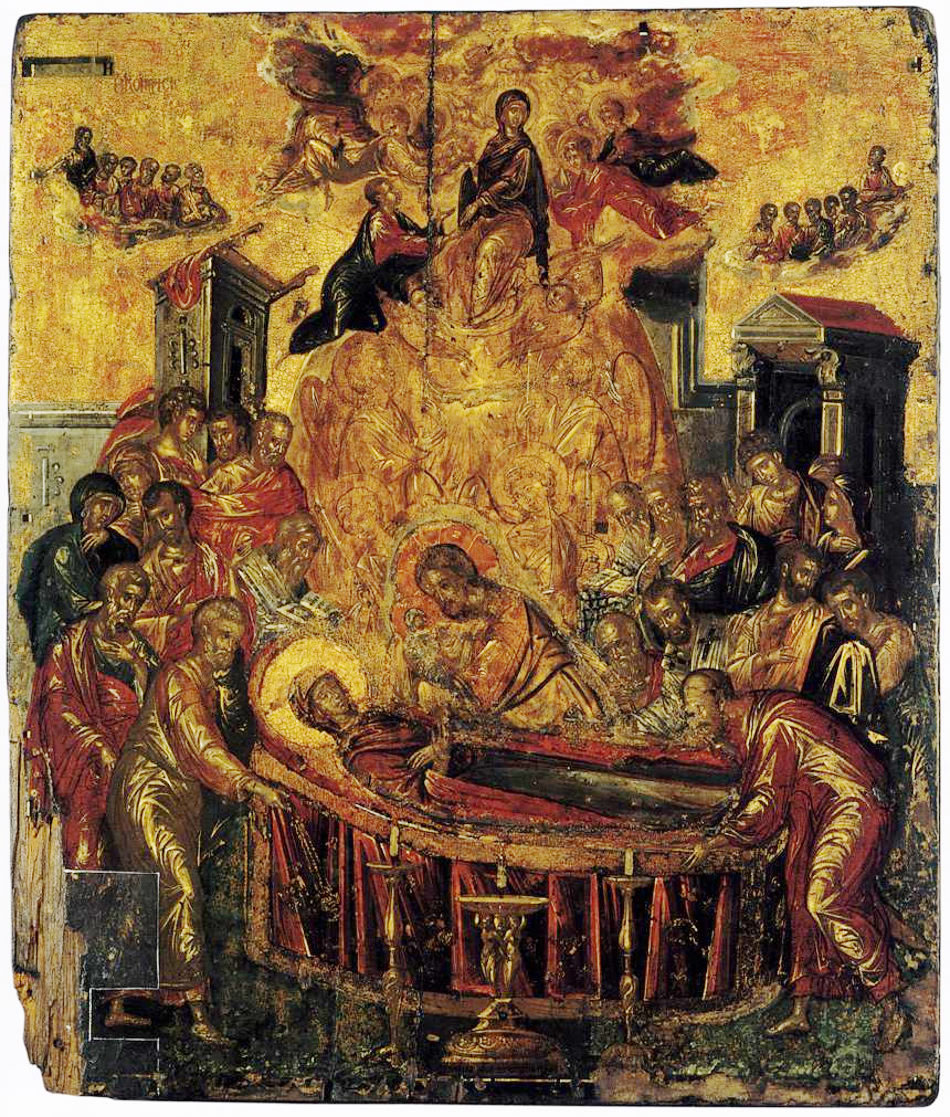 The Assumption of Mary is a dogma for Catholics. It is the belief that she was taken to heaven by God at the end of her earthly life. Because she was conceived immaculately – that is she was prevented from inheriting the effects of Original Sin (another dogma) – she did not suffer the effects of death such as the separation of body and soul, and bodily decay. This would mean that when her earthly life ended she was taken up body and soul into heaven; unlike us, she did not have to wait for the End Of Time when body and soul will be reunited. The Eastern Tradition use the word “dormition” (sleep) instead of “death” as a metaphor that she did not die but just went to sleep.

Different western artists have expressed her assumption in different ways, but it is interesting how Byzantine / Eastern icons show Mary in her deathbed with Christ holding a baby version of her in his arms. The imagery is one of a father lovingly holding his child. The Greek Orthodox calls this imagery The Dormition of the Theotokos or the English equivalent The Dormition of the Mother of God. It would not be farfetched to speculate that El Greco, would have been influenced by Greek Orthodox icons since he originates from Greece.

The ironic feature of the Dormition representations is that it refers to Mary as Mother of God (Theotokos), but it is Christ holding the baby Mary. Surely Christ is Mary’s son and not the other way around, but this imagery of Christ holding the baby Mary in his arms is of course is an allegory: it is a visual presentation of Mary as “daughter Zion.”

In the Old Testament, some cities were called “daughter” by God. “Daughter Jerusalem” and “Daughter Zion” are examples. (Zechariah 9:9) In the Hebrew context it is an expression of endearment to be called “daughter”, and that is exactly how God felt for Zion. See, after King David had reunited the twelve tribes of Israel, some tribes would go back into idolatry and separate from the Davidic Kingdom. The only one faithful to God was Judah, where we can find the Temple on top of Mount Zion in Jerusalem. This faithfulness and conformity to God is what makes her an endearing daughter to God.

Scripture is silent about Mary’s reaction after the Angel Gabriel left her after announcing that she would be the mother of the Messiah. We can infer that she didn’t tell Joseph, her betrothed, or else he wouldn’t be so perturbed finding her pregnant. There is a consensus among theologians that she kept silent because she felt this “secret” was between her and God. However, when she visited her cousin Elizabeth in Judea, Elizabeth greeted her with words alluding she was in on the secret. It is then that Mary, feeling she can finally share with someone who knows about it, bursts forth with her Magnificat: “My soul proclaims the greatness of the Lord;…” (Luke 1:46-55)

The phrases in the Magnificat reflects scriptural passage attributable to “daughter Zion.” So when Mary says it, it is as if she is the personification of daughter Zion. Thus, Eastern Icons show Christ carrying the baby Mary in his doting arms as a way to show her as daughter Zion.

This gets reinforced in Dante’s Divine Comedy in the 1300’s when in the Paradiso, Saint Bernard exclaims: “see the face that is most like Christ’s” and “Virgin mother, daughter of your Son.”

Because Mary completely cooperated with God’s plan, she is so conformed to Christ. Thus to have a face like Christ is a figure of speech that means that she is so like him – and that doesn’t mean just facial features. This conformity is what is so pleasing to God. So we understand from these icons that Mary because she is likened to daughter Zion, is endearing to God. She is so endearing, in fact, that God could not allow her body to undergo any corruption at the end of her life – thus her Assumption. Christ carrying Mary as “daughter Zion” juxtaposed to her lifeless body connects these two ideas together visually.

Most of the time, just like in this painting, we see in the upper portion another image of Mary seated on a throne as Queen. This shows her final glorification by God when he makes her queen. It is another visual connection of a sequence of the end of Mary’s life: Dormition, Assumption, and Coronation.