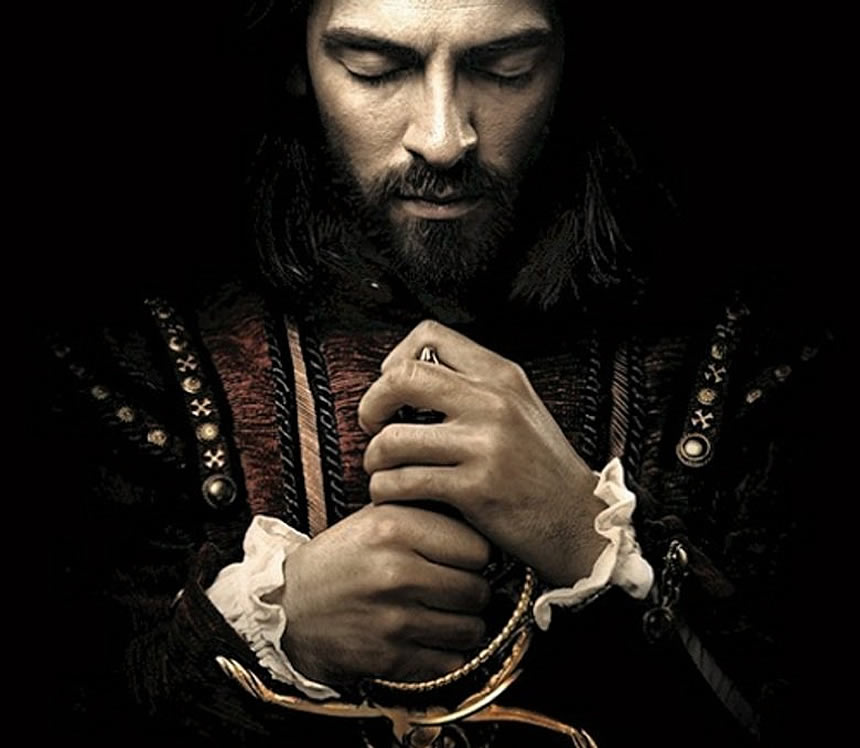 In the recent release of Ignacio de Loyola, [Spoiler Alert! ]  Iñigo uses a title in his memoirs referring to himself as “Knight of the Morning Star.” Later on we see Iñigo being tempted by Satan in a highly dramatic and imaginative visualization. In that scene, Satan refers to himself as the “morning star” and why not as it is rendered in Latin as “lucifer.” After having overcome this temptation, the child Christ similarly engages Iñigo in a conversation and also refers to himself as the “morning star.” Where is that in the Bible?

In the Old Testament, Isaiah referred to the King of Babylon (most probably Nebuchadnezzar) as a bright morning star (Isaiah 14:12) This comes from the Babylonian custom of calling a dying king “Heilel” best translated as “day star, son of the dawn.” Thereabouts in the time of Isaiah, Babylon was an enemy of Israel and caused the dispersion of Judah’s citizens outside of Israel – called the first Jewish Diaspora. In fact we can read it as is in the Orthodox Jewish Bible:

How you are fallen from heaven, Heylel, son of the morning! How you are cut down to the ground, who laid the nations low!

When St. Jerome translated the Greek into Latin, he rendered Heylel as “lucifer”, which means nothing more than morning star or day star. Note that it isn’t a name because there is no capitalization:

This “bright star” falling from heaven in Isaiah can easily be connected to Luke 10:18 where Jesus told his disciples, “I have observed Satan fall like lightning from the sky.” The Church Fathers saw a connection between this particular Babylonian King with Satan – at least a personification of an evil enemy of Judah.  In most Catholic Bibles (such as the NABRE), the footnotes of this verse from Luke is tied up with Revelation 12, which is the story of a Woman with a son who are pursued by a dragon.

The traditional reading of this chapter from Revelation is that it is the counterpart of the Garden of Eden. This becomes very clear because the Hebrew word for “serpent” can also be rendered as “dragon”. So in Eden, when Eve (and Adam) was tempted by the “dragon” she succumbed to its attacks. In Revelation, on the otherhand, when Mary (and child) was confronted by King Herod – the personification of Satan – they escape his attack. So we can see that “morning star” in Isaiah, and “dragon” in Revelation alludes to King Nebuchadnezzar of Babylon, and King Herod respectively – and both are personifications of Satan, the one real enemy of God’s people. Thus, this is how the morning star, rendered in Latin as “Lucifer”, was associated with Satan.

We can read in the King James Version, written many centuries after the Vulgate,  that “lucifer” has become  a proper name because it is capitalized:

How art thou fallen from heaven, O Lucifer, son of the morning! how art thou cut down to the ground, which didst weaken the nations!

Just to be clear about it, the Vulgate never intended “lucifer” as a proper name for Satan. It must be said that by writing lucifer as a name with a capital-L, “Lucifer,” in the KJV, it  can render the meaning of the verse as solely talking about Satan if one is not careful about its etymology.  This was never the intention of the translators of the KJV as well, but it has proliferated into many Bibles, as well as in popular culture. While the KJV continues to render this verse as “Lucifer”, newer translations render it as “day star” or “morning star” perhaps as an allusion that there was a mistake.

This “mistake” becomes especially confusing to Christians when in the New Testament, Christ is also referred to as the “morning star.” We find this in 2 Peter 1:19, and especially in Revelations 22:16 where Christ calls himself the morning star.

I, Jesus, sent my angel to give you this testimony for the churches. I am the root and offspring of David, the bright morning star.
New American Bible Revised Edition (NABRE)

There is a saying in Latin, “Lex Orandi, Lex Credendi” ( the Law of Prayer is the Law of Belief) better translated as “we pray what we believe.” So some people are shocked to find the Catholic Church worshipping “Lucifer” during Easter – but we aren’t.  The Easter Vigil mass is called the “Lucernarium” (“evening”) because it refers to the evening before Easter Sunday, but using a term of “light” (lux) because Christ is the “Light” of the World. In the Exsultet  (here both in English and Latin) we pray to the Father and worship “lucifer” – the morning star:

May this flame be found still burning
by the Morning Star:
the one Morning Star who never sets,
Christ your Son,
who, coming back from death’s domain,
has shed his peaceful light on humanity,
and lives and reigns forever and ever.

Notice that in both the English and the Latin text, “lucifer” is never capitalized. So it is not referring to the popular nomenclature of Satan. Instead, it simply refers to the morning star, “Christ your Son.”

Errors Jesus Scripture
Share this Post:
Previous Article
Mental Prayer — Part 1 of 2: Why we need it
Next Article
Seven lessons from the Garden of Eden