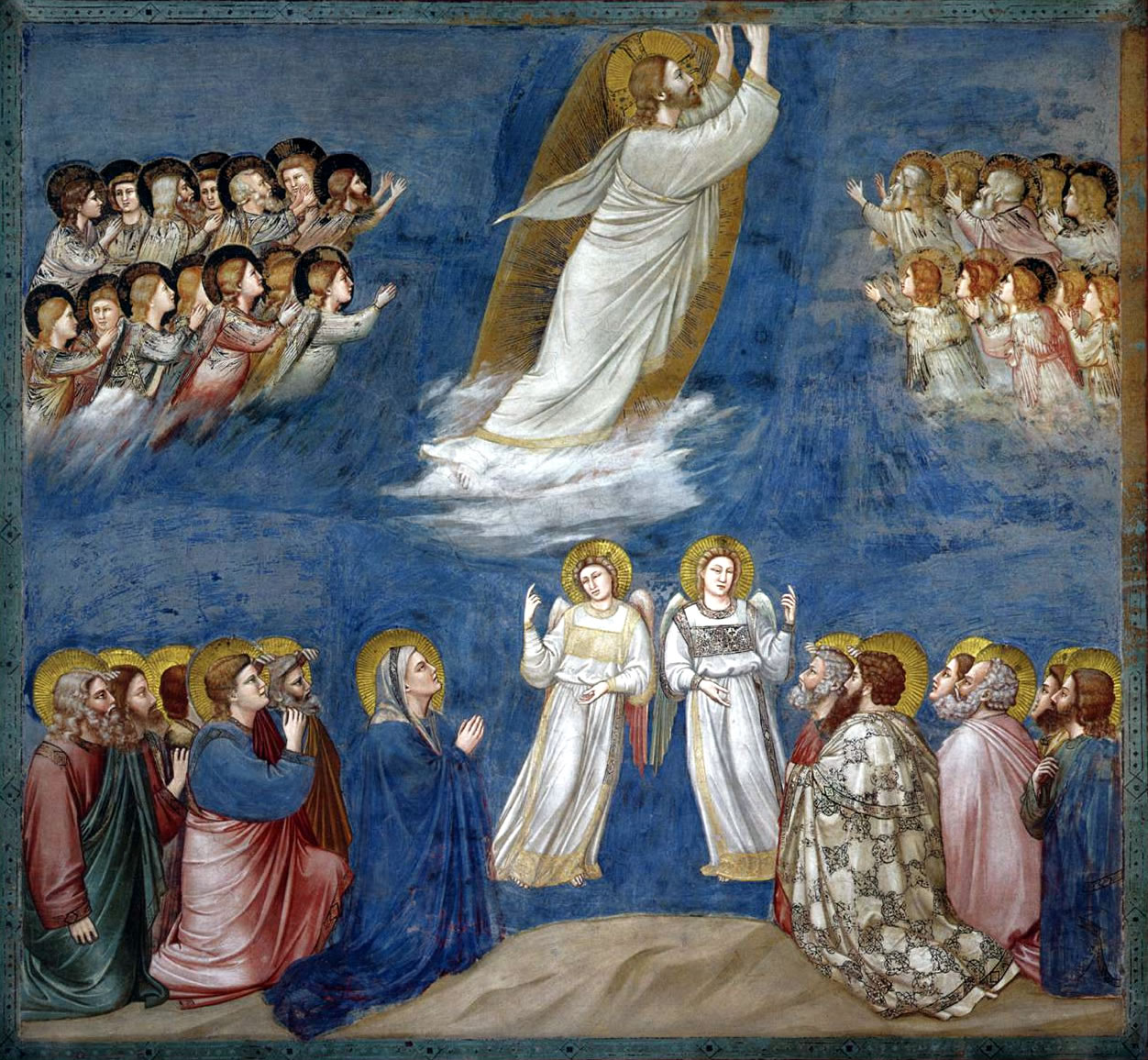 The Ascension is not as if Jesus became a rocketship that lifted off and headed to the stars. It isn’t a departure, but a glorification.

In Eden, Adam and Eve who were so afraid of death, disobeyed God and fell from grace. Since it was grace that perfected us to be in the image of God, the lack of grace as a result of original sin is a “descent” in nature. When Christ obeyed God and willingly faced death, he bought back for us the grace that would perfect us. He represented us as the first-fruit of a new creation and finally humankind entered back into the fold of God. Our human nature ascended back to its original dignity.

When Christ ascended, he chose to bring with him the scars of his Passion. We know this because after his Resurrection, he showed the wounds of his hands, feet, and side to his apostles. The wounds did not disappear when he ascended. Saint John also tells us in Revelation: “Then I saw standing in the midst of the throne and the four living creatures and the elders, a Lamb that seemed to have been slain.”  (Revelation 5:6) The Lamb, of course is Jesus and he bears the marks of the passion. We believe that the hypostatic union – that he is both God and man at the same time – will last forever, and, therefore, not only does his body represent us, his wounded body is incorporated into the communion of the Blessed Trinity.

There, his wounds continue to plead for mercy for all humankind from the Father. As St. Paul told the Hebrews: “For Christ did not enter into a sanctuary made by hands, a copy of the true one, but heaven itself, that he might now appear before God on our behalf.” (Hebrews 9:24) With his scarred body, he continues to save us.

An earthly coronation would have made us think that his kingdom is a worldly one. But he made it clear that it was just the opposite when he spoke with Pilate and said, “my kingdom is not of this world.” (John 18:36) In this context, the Ascension is not a departure but a participation in the divine dimension over space. If he remained on earth, it might be difficult for us to pray to him if we knew he was somewhere as a person on earth. But in his ascended state, Christ is not gone but has become accessible to all of us at every time and in every place. Tied with his presence in the Eucharist, this is his way of fulfilling his promise to be with us until the end of time. In this context, his cryptic words during the Last Supper makes sense: “I am going away and I will come back to you.”(John 14:28)  It is in ascending where he comes to all of us.

In an ascended state, Christ has a better “vantage point.” It is like the time he went on top of a mountain to pray as his disciples went on boat but were threatened by a sudden storm.(Mark 6:45-52) He might have been far, but he knew their predicament, walked on water, got into the boat, and calmed the storm. Sometimes, Christ might seem far – we might not even see him or feel him – but he is always watching and he will enter the boat of our life at any moment if we let him.

This is an excerpt from the upcoming book Contemplating the Mysteries of the Holy Rosary, soon to be released by Kindlings Press.

Eucharist Jesus Original Sin
Share this Post:
Previous Article
Pentecost and the Birth of the Church
Next Article
Making sense of the Covid-19 pandemic in the plan of God

How to quash temptation the way Christ did in the desert