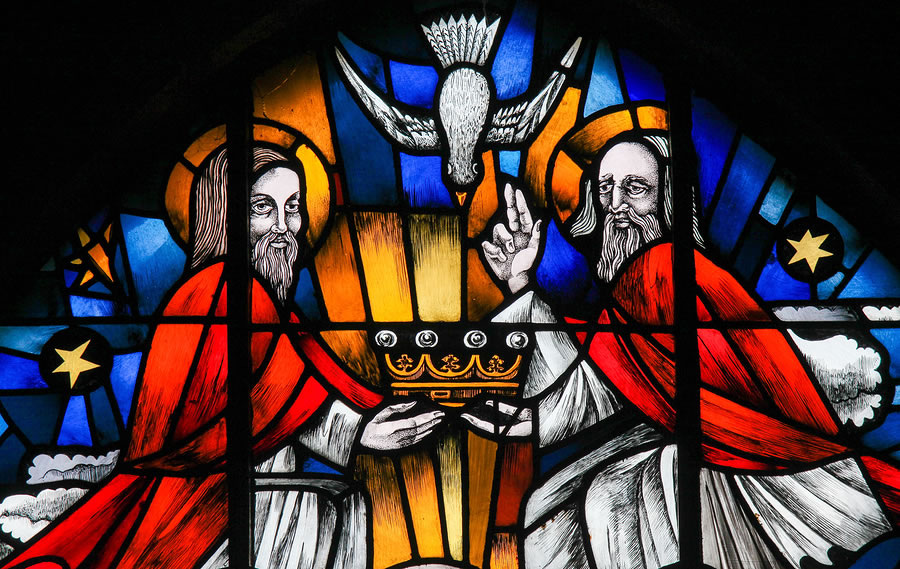 The Judeo-Christian belief is that there is only one God. Since God is the only one who is existence itself, then all other beings owe their existence to him. That would make him the God, for how can a being be god if they were created by someone else. Therefore, when God told Moses he is existence itself, (“I Am who Am",) he was claiming to be the one and only God.

Thus, in the Nicene Creed, we say, “I believe in one God…” This is central to our theology whose roots come from the Jewish Shema prayer found in Scripture: “Hear, O Israel, the Lord our God, the Lord is one.”[1] It is echoed many times in other Bible verses, even in the New Testament.[2]

Judaism and Islam are also monotheistic religions – that means they also believe there is only one God. However, what sets Christians apart is that we believe there are three Persons in one God, which we call The Blessed Trinity.

A person is an identity. It is an answer to “who?” When we want to know the identity of someone, we ask, “who are you?” A person, therefore, identifies someone.[4]

A nature, on the other hand, answers, “what?” When we want to know what something is, we ask, “what is it?” A nature, therefore, describes what a thing is.[5]

In the Blessed Trinity, there are three distinct individuals – The Father, The Son, and The Holy Spirit. They are three separate identities; however, they share one single divine nature.

In the Blessed Trinity, we refer to the first Person as Father because Jesus himself told us to do so when he taught us to pray the Our Father.[6]

He is the Father because the Son was begotten from him, and the Holy Spirit proceeds from both the Father and the Son. He did not create them, but they originate from him. Therefore, he is the originator – the Godhead.

Saint Augustine has a beautiful way of explaining how the Son is begotten of the Father.[7]

Since the Father is existence itself (from #4), the idea is also existence itself. Therefore, it is not just an idea, but also a living, existing being. This “living idea” of the Father is God the Son. Saint Paul tell us that the Son, “is the refulgence of his glory, the very imprint of his being.”[8]

Saint John the apostle also expressed this concisely at the start of his Gospel:

We have to see here how John is explaining that Jesus is the logos – the Word – that was, since the “beginning” with God; there was never a time the Father and Son were not together.

This necessarily means the Father did not create Jesus. That would make him merely a creation. So, when, in the Creed, we say the Son is consubstantial with the Father, we mean they are of the same divine nature that has no beginning.

Because both Father and Son are existence itself, then the love they have for one another is also a living substance, as St. Augustine expresses it.[9]

The word spirit comes from the Latin word spiritus, which means breath. If we can personify the Father and the Son’s love for each other, their love would be so perfect that no words are needed. Their hearts would be bursting with love that the only thing needed to express it is with a sigh (or breath) of love. As Archbishop Fulton J. Sheen liked to describe it:

“Love at such a stage does not speak; does not cry; does not express itself by words, nor by canticles; it expresses itself as we do in some ineffable moments, by that which indicates the very exhaustion of our giving — namely, a sigh, or a breath. And that is why the Third Person of the Blessed Trinity is called the Holy Spirit.”

Owing the logic to Saint Augustine, we know the Persons of the Trinity are different because they have different origins. The father has no origin, the Son is begotten of the Father, and the Holy Spirit proceeds from both Father and son.

Although there are three different persons, they are all equal in majesty for there is only one divine nature.

The Blessed Trinity is a mystery and, therefore, we cannot fully understand it. This doesn’t mean we believe in something irrational. No, it means we acknowledge that our minds are finite and cannot completely comprehend an eternal and infinite God. We simply admit that the concept of God is super-rational – above our reasoning for we are mere creatures. If we could fully comprehend God, then that would mean our minds are greater than God – and that would mean we are God.

Because of this inadequacy, we try to use human terms, such as “father” and “son,” to explain the concept of God.

We also use terms like “begotten” and “proceeds from” because we lack the language to express how the Son and Holy Spirit have origins without being created.

Doctrine
Share this Post:
Previous Article
Novenas are not Magical Incantations
Next Article
Lessons from the Visitation