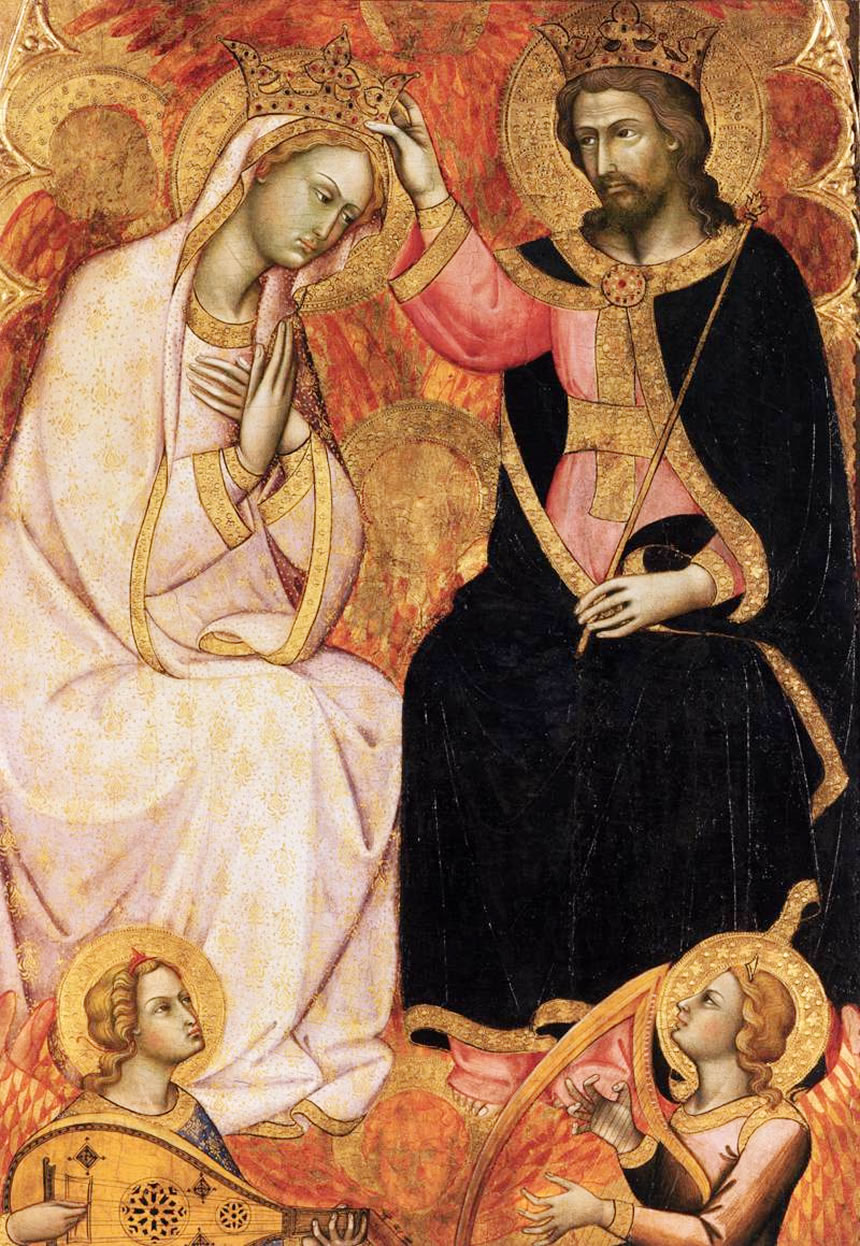 The last mystery of the holy rosary is the Coronation of Mary. This directs our thoughts to meditate on the belief that she is queen. But why do Catholics believe that? The simple answer is because Christ, her son, is king. This requires some explanation of course, and that is what this article is about.

Before going to Mary’s queenship, we have to first tackle why we say Christ is king. As will see later, it is central to the queenship of Mary.

To encapsulate Israelite history in a few short sentences, they settled down in the land that God promised them after they were freed from Egyptian slavery.  God sent prophets to be his spokesmen, but the people wanted to copy the political structure they were in contact with, so they asked for a king. God gave them judges instead – people who would protect them from their enemies - but they still wanted a king. So God gave them one: Saul. He didn’t quite do what God told him, so God replaced him with David, son of Jesse.

Very quickly we can see David as a foreshadowing of Christ: he was born in Bethlehem, he was a shepherd, and defeated Goliath. Christ was born in the same place. He claimed to be the Good Shepherd. When the angel Gabriel announced that Mary would conceive, he told her that her child’s kingdom will have no end. (Luke 1:33) He is the fulfilment of God’s protoevangelium in Genesis when God told the serpent that the woman and her offspring would crush his head  (Genesis 3:15), the way David beheaded Goliath.

We can see too, that next king in the Davidic line, Solomon as the fulfilment of the promise that David’s seed would build a house for God for it was he who finished building the Temple where daily sacrifices were offered to God. But he is also a foreshadowing of Christ. When Luke describes that Jesus is a baby wrapped in swaddling clothes (Luke 2:12), he is reminding his readers of the book of Wisdom written by Solomon who claims to have been nurtured in “swaddling clothes”. (Wisdom 7:4) Furthermore, it is Christ’s church, which is the new temple – the “house of God” – where sacrifices are continually made to God through the mass.

Isaiah said: “... a shoot shall sprout from the stump of Jesse and from his roots a bud shall blossom. The spirit of the Lord shall rest upon him: a spirit of wisdom and of understanding, a spirit of counsel and of strength, a spirit of knowledge and of fear of the Lord.” (Isaiah 11:1)  Again, while it might sound like Solomon, who was known for his wisdom and counsel, it is a foreshadowing of Jesus, to whom the Holy Spirit, in form of a dove, rested on. (Matthew 3:16)

It seemed that it is through this kingdom that God will fulfill all promises. However, the kings after Solomon did not quite fear God and lapsed back into idolatry. The kingdom splintered and was conquered by different people such as the Assyrians, Babylonians, and eventually the Romans.

No one wanted to talk about the Davidic Kingdom openly because it would be misconstrued as a plot to overthrow the current conqueror. It would also be natural for any conqueror to kill any descendants of this royal line so that there won’t be any inheritor to the throne, lest some zeal ignite their patriotism to an uprising. Naturally, any one related to David kept quiet about their ancestry, and so we can say that the Davidic Kingdom “died”. What was once a tree became a stump.

Matthew’s Gospel opens with Jesus’ ancestry and links him to King David. Jesus, therefore, has claim to the Davidic throne! One might say Jesus has none of Joseph’s blood because he was conceived wholly of Mary and the Holy Spirit, but that is to misunderstand Jewish circumcision. We have to remember that Jesus was circumcised by Joseph who gave him the name “Jesus” – and when a man gives a son a name, he is, in fact, making a testament to the world that the boy is his son and the boy is annexed to his ancestry. (Interestingly during Baptism, when the priest baptizes us and give us a name in the name of God – that is to say that he is standing in place of God, we become God’s children.) Jesus, therefore, becomes a real son of Joseph (the way we become real son’s and daughter’s of God at baptism). It is not token sonship, it is real. Thus, Jesus inherits the lineage of Joseph.

Corollary to this, we know Jesus acted as a king at least twice. First, when he gave Peter the keys to the kingdom (Matthew 16:19) he is doing only what a Davidic King is entitled to do. It was customary for the king to choose a second in command, a trusted person who knew his heart, and give him the “keys”. We see this in Isaiah 22:22 when the keys are given to Eliakim.

Second, the entry into Jerusalem is a re-enactment of a king entering a city. In his book, “Jesus of Nazareth”, Pope Benedict XVI explains that when Christ asked to prepare a colt that was never ridden; he is in fact claiming the right of a king for transportation that has never been used. The people understood this gesture, which is why they treated him like a king, at least for that moment. They copied the image of Psalm 118:27, which every Jew knew by heart. It is an image of a king arriving and people line the streets with “Leafy branches” as he goes to the altar (Psalm 118:27) Interestingly, the Gospels tell us that when Jesus entered Jerusalem, he headed straight for the Temple.

We also must not miss the mission of John the Baptist who was to “make straight the paths” as it was customary when a king was known to pass by a certain place, the roads were prepared so that it would be as flat as possible.

Jesus of Nazareth is King of the Jews – it was the reason why he was crucified. Pilate made sure that everyone understood it and had it written in three languages to be put on the cross of Jesus. He is a new David who brings all the tribes of the world together under his kingdom, represented by the twelve apostles.

Where does Mary’s queenship fit in all of this, one might ask. We can see that Jesus uses customs and traditions of the Davidic Kingdom so his kingship can be recognized. One of these traditions is that it is the king’s mother who is crowned queen – the Gebirah. When Solomon became king, his mother, Bathsheba became queen. We read that when Bathsheba entered Solomon’s court to intercede for someone, he paid her homage, had a throne prepared for her, and made her sit at his right hand – a position of power. (1 Kings 2:19) So, because Jesus is our king, following the Davidic tradition, Mary, his mother, is the queen mother.

This is the reason why in paintings, we always see Mary at Christ’s right side. (When looking at the painting we will see her at Christ’s left, but if we put ourselves in the place of Christ, she is on the right.) This is the reason why we call her Our Lady – because it is how one addresses a queen. This is why we ask her to intercede for us, for she is in a position to ask things of her son.1

Across the years there were many disputes about Mary, and Marian dogmas had to be established to articulate what it is we believe, but the queenship of Mary was never a serious question.

As a conclusion, the queenship of Mary is not about her: it is about Christ’s kingship. This article focuses on Christ’s kingship because if we don’t believe that, then there is no basis for Mary being queen. Just like everything we believe about Mary, then, it is not for her sake, but because it points to Christ’s identity. In this case, whenever we acknowledge that Mary is queen, we are saying Jesus is king.

If Mary is indeed queen and our mother, then we are princes and princess, and we must act so that it reflects that we are part of the royal household of God.

1The Book of Revelation alludes to her queenship too when we read of the “woman clothed with the sun, the moon under her feet, and upon her head a crown of twelve stars.” (Revelation 12:1) If one reads this with Mary in mind, one can see how it applies to her without much difficulty.