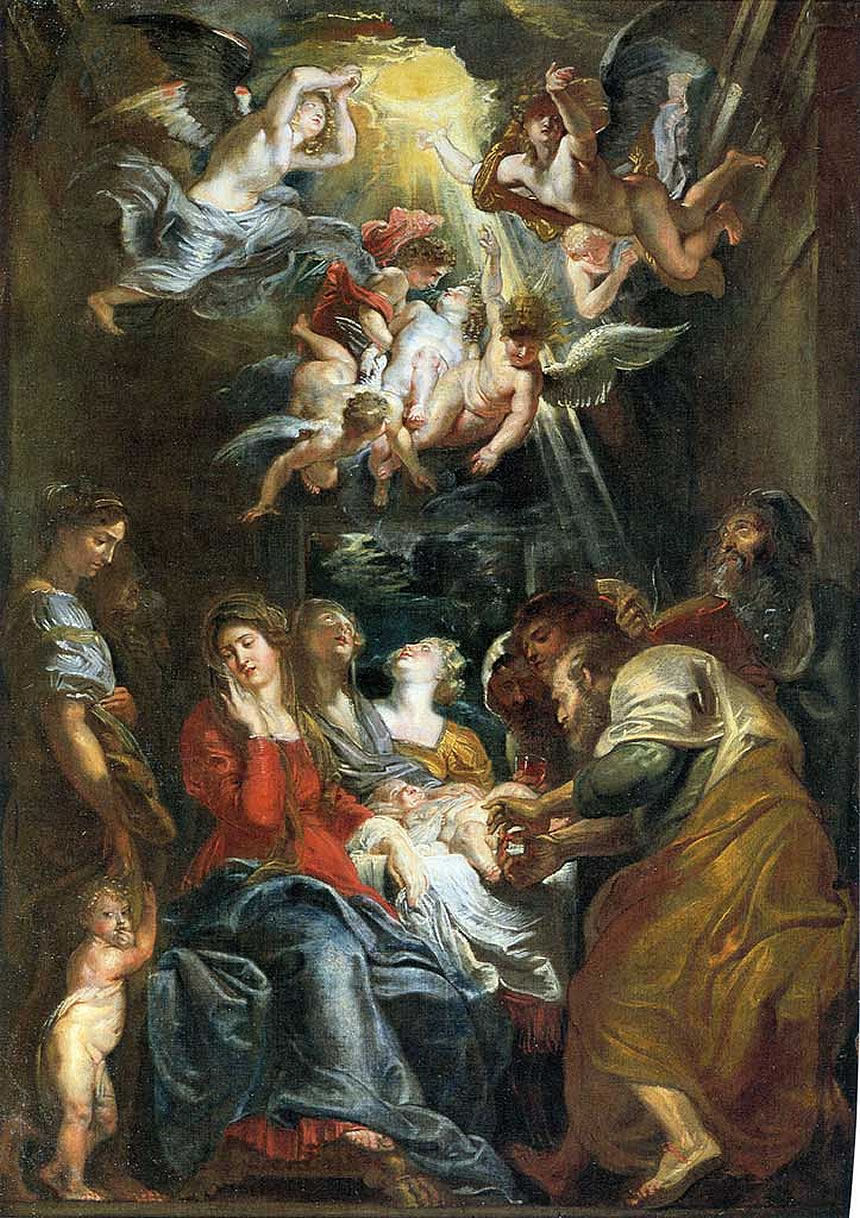 As part of an Old Testament covenant, male Jews are required to be circumcised eight days after they are born. For many years until 1960, Christians used to commemorate the Circumcision of Christ on January 1 as it foreshadowed Christ’s redemptive role by shedding blood for the first time. This was replaced by the Solemnity of Mary, the Holy Mother of God wherein the Gospel is still that of Luke 2:16-21, which remembers Christ’s circumcision.

As Christians, we may think we’ve put away Jewish rites, but that is to misunderstand Christian history.  It was in Antioch that Christ’s followers were first called Christians, and the identity developed from there. But many years prior to that, the early Christians identified themselves as Jews,read scripture as Jews, and went to synagogues. They still considered themselves Jews, but enlightened to understanding things differently as Jesus taught them.  For example, as followers of Christ, they celebrated the Eucharist at home after coming from the synagogue. So it wasn’t putting away the Old Covenant, but the perfection of it.  So for us Christians of today, in order to appreciate Scripture and comprehend Tradition, it is important we see them with Jewish tradition as a background. Circumcision is one of those things that will bring so much light to our understanding of salvation.

As a background, when God told Abraham and his wife Sarah they would bear a child, they were overjoyed. But after many years of being childless thereafter, their faith waned and they decided to do things on their own. Sarah told Abraham to conceive a child with Hagar, her maid. Hagar gave birth to a child, Ishmael; but this was not the descendant God had planned. Salvation history was to be made with Isaac, not Ishmael. To correct this, God made a covenant with Abraham to make him fertile, but he and his descendants must circumcise their foreskin. It can be suggested that God was putting Abraham in his place: the use of the sexual act is not something man determines – quite poetic if one ponders on it.

So from the time of Abraham, Israelites were circumcised. In that ritual, the parents of a male child bring him to someone who is authorized to perform the circumcision. Part of the ceremony is the naming of the child. It is the Father who gives his son a name. In the Gospel of Luke, we read of this twice when John the Baptist was given a name by Zechariah1, and when Jesus was given a name by Joseph.

The naming of a son by his father in this ceremony is no trivial matter as if you were giving a name to a pet. It is so much more than that. In this rite, when a man gives a name to a male child, he is, in fact, acknowledging that he is the father of the child. He, therefore, adds the child to the lineage of his family.

Let’s slow down and unpack this because this is very, very important.

Jesus is the son of Mary by blood. Joseph has no contribution whatsoever to Christ’s conception. The body and blood and DNA of Jesus are all Mary’s, 2 BUT because Joseph gives the son of Mary a name, (Luke 2:21) he acknowledges that he is the child’s father.  Thus, Jesus is added to Joseph’s lineage.

It really is an “adoption” without the fancy papers. Because Jesus becomes a real son of Joseph, Jesus inherits all the rights of Joseph’s family! Here is where the unpacking begins.

We know the Jewish world knows about Jesus’s ancestry because it is recorded both in the Gospels of Matthew and Luke (Matthew 1:1-17; Luke 3:23-38). In that list, Jesus can trace his ancestry to King David. In fact, the reason why Joseph had to go to Bethlehem for the census is that his lineage is from there where King David was born. Thus Bethlehem is also known as Royal David’s City. So the prophecy that the Messiah would be a king in the line of David, the son of Jesse, (see Isaiah 11:1) is fulfilled by Joseph including Jesus in his genealogy.

With Joseph giving Jesus his ancestry, the Annunciation of Gabriel to Mary makes more sense too: “He will be great and will be called Son of the Most High, and the Lord God will give him the throne of David his father, and he will rule over the house of Jacob forever, and of his kingdom there will be no end.” (Luke 1:32-33)

This can only mean Joseph definitely was part of God’s plan; he was not just an appendage  so Mary didn’t have to explain who the father of her child was. When an angel spoke to him in a dream: “Joseph, son of David, do not be afraid to take Mary your wife into your home. For it is through the Holy Spirit that this child has been conceived in her. She will bear a son and you are to name him Jesus …” (Matthew 1:20-21) the angel was, in fact, asking Joseph to be Christ’s father and add him to his genealogy. This is the reason why one of the titles of Jesus was “son of David” in many instances (Matthew 9:27;  12:23;  15:22; 20:30; 21:5-9)

So to be very clear about it, it is through Joseph’s lineage that Jesus inherits the right to be a Davidic King. His relationship to Joseph is a very real son-ship and not just something “on paper”.3

The minister of baptism acts for God when the child is given a name. The formula is “I baptize you in the name of the Father, and of the Son, and of the Holy Spirit.” So the minister is just lending his body to the trinity, but it is God” giving this child a name.” So we can see, just like Jesus inherits the family of Joseph in his naming; during baptism, we inherit the family of God in our naming. Just like Jesus becomes a true son of Joseph; we too, become true children of God. It is no coincidence that the reading for this solemnity comes from Galatians 4:4-7, where we read the lines:“But when the fulness of time had come, God sent his Son, born of a woman, born under the law, to ransom those under the law, so that we might receive adoption... So you are no longer a slave but a child, and if a child then also an heir, through God.”

Just as circumcision put Abraham in his place, Saint Paul puts us in our place saying that through baptism our life is no longer ours for we have been buried with Christ, and raised with him in his Resurrection – and thus we have to act like children of God. After reading this article, re-read Colossians 2:9-15 and it will make a lot of sense.

1 A reason why Elizabeth was asked to give a name for John was that Zechariah was rendered dumb by Gabriel. But when the people officiating found odd that Elizabeth gave the name “John”, they consulted Zechariah for final consent.

3 CCC 527 Jesus’s circumcision is a sign of his incorporation into Abraham’s descendants...

Jesus Sacraments Scripture Typology
Share this Post:
Previous Article
A Primer on Angels
Next Article
Mental Prayer — Part 2 of 2: How to do it