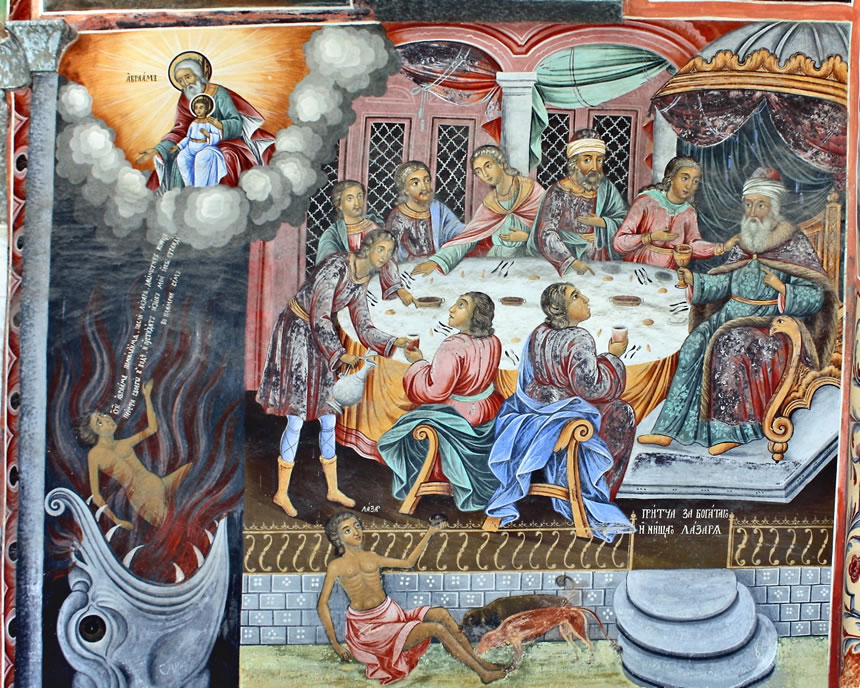 Among the 46 parables that Christ told, the one of Lazarus and the rich man, which is found in Luke 16:19-31, is unique because it is the only one with a character that has a name. Why is that? It was done purposely so that it will stand out over all the other parables – not that it was the best parable, but that it made it different from all the others.

There was a rich man who dressed in purple garments and fine linen and dined sumptuously each day. And lying at his door was a poor man named Lazarus, covered with sores, who would gladly have eaten his fill of the scraps that fell from the rich man’s table. Dogs even used to come and lick his sores.

When the poor man died, he was carried away by angels to the bosom of Abraham. The rich man also died and was buried, and from the netherworld, where he was in torment, he raised his eyes and saw Abraham far off and Lazarus at his side. And he cried out,“Father Abraham, have pity on me. Send Lazarus to dip the tip of his finger in water and cool my tongue, for I am suffering torment in these flames.”

Abraham replied,“My child, remember that you received what was good during your lifetime while Lazarus likewise received what was bad; but now he is comforted here, whereas you are tormented. Moreover, between us and you a great chasm is established to prevent anyone from crossing who might wish to go from our side to yours or from your side to ours.”

He said,“Then I beg you, father, send him to my father’s house, for I have five brothers, so that he may warn them,lest they too come to this place of torment.” But Abraham replied,“They have Moses and the prophets. Let them listen to them.”

He said,“Oh no, father Abraham, but if someone from the dead goes to them, they will repent.”

Then Abraham said,“If they will not listen to Moses and the prophets, neither will they be persuaded if someone should rise from the dead.”

It had to stand out because it was connected to a real person: Jesus’ friend with the same name. To appreciate this, we have to zero-in on the last paragraph which is the important part of the parable. There, Abraham says that even if Lazarus comes back to life, the obstinate brothers of the rich man will not believe.

This parable should remind us of the similar events of Christ’s friend that he raised from the dead. The Gospel of John says Jesus had a friend named Lazarus in the town of Bethany. The man had been ill, and when his sister’s called for Jesus, He came; but He came too late because Lazarus had already died.

This Lazarus must have been a close friend of Jesus because this is one of only two times the evangelists record Jesus weeping. (The other is when He drew close to Jerusalem, he wept knowing what would become of the city.) We also read of a discourse between Him and Martha about belief in the resurrection. Jesus tells her that anyone who believes in Him will live. This scene reveals that Jesus is God and Man. He is so human that he cries for someone he loves. We also see that Jesus is God, the Lord of Life, and death has no control over him or whomever he chooses.

Let us continue with the story of the dead friend of Jesus, Lazarus from the Gospel of John:

Jesus said,“Take away the stone.” Martha, the dead man’s sister, said to him,“Lord, by now there will be a stench; he has been dead for four days.” Jesus said to her,“Did I not tell you that if you believe you will see the glory of God?" So they took away the stone. And Jesus raised his eyes and said,“Father,  I thank you for hearing me.  I know that you always hear me; but because of the crowd here I have said this, that they may believe that you sent me.” And when he had said this, he cried out in a loud voice,“Lazarus, come out!"

The dead man came out, tied hand and foot with burial bands, and his face was wrapped in a cloth. So Jesus said to them,“Untie him and let him go.” Now many of the Jews who had come to Mary and seen what he had done began to believe in him.

But some of them went to the Pharisees and told them what Jesus had done. So the chief priests and the Pharisees convened the Sanhedrin and said,“What are we going to do? This man is performing many signs. If we leave him alone, all will believe in him, and the Romans will come and take away both our land and our nation.”

But one of them, Caiaphas, who was high priest that year, said to them,“You know nothing, nor do you consider that it is better for you that one man should die instead of the people, so that the whole nation may not perish.” He did not say this on his own, but since he was high priest for that year, he prophesied that Jesus was going to die for the nation, and not only for the nation, but also to gather into one the dispersed children of God. So from that day on they planned to kill him.
John 11:39-57

In this scene, Jesus thanked the Father and said, "because of the crowd here I have said this, that they may believe you sent me.” In other words, Jesus raised a dead man named Lazarus so that others may believe Him and His message. If it sounds so much like the parable, it is because it was a precursor to this event, except this time Jesus is the prophet and the resurrected man is Lazarus of Bethany.

When one meditates on the stories of Lazarus – both the real person and the parable – one can see how they can be microcosms of Christ’s death and resurrection, for we know Jesus resurrected from his death on the cross and yet many did not believe, and still today many do not believe.

Scripture Typology
Share this Post:
Previous Article
Hosanna in the Highest
Next Article
What the Pope Is and Is Not (and Why He Is Important)