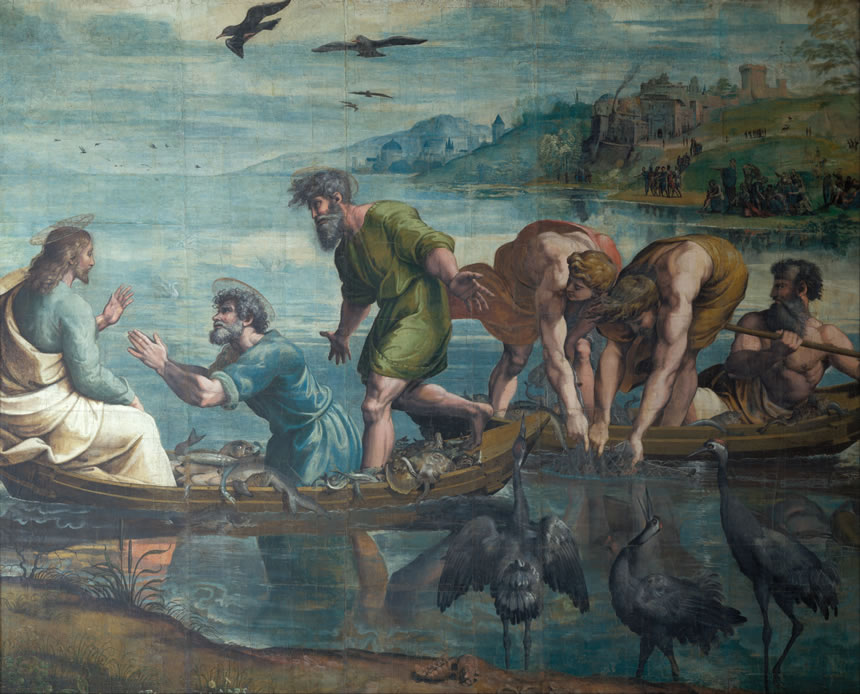 This article is a commentary on the miraculous draught of fish can be read in Luke 5:1-11.

The first interesting thing to consider is that Jesus teaches from Peter’s boat. This has special meaning to Catholics because one of the images of the Church is a boat. A boat is a vessel that brings people from one place to another, and we see the Church as the vessel of salvation that brings us from earth to heaven. Noah’s ark foreshadows this because those who entered the ark were saved from death. 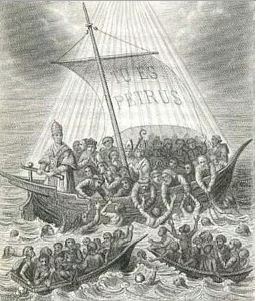 The reaction of Peter to the miraculous catch of fish is one of fear and guilt: “Depart from me, Lord, for I am a sinful man.” It should be odd that this is his reaction because he has witnessed several miracles prior to this so miracles aren’t new to him. His own mother-in-law was cured at the touch of Jesus. He was in Cana when Christ turned water into wine, and that should have been awesome.  So why this particular reaction now? The theologian Frank J. Sheed sheds some light on this by explaining: “Seeing Christ, he at last saw himself.”

The other miracles did not hit Peter the way this did. Fishing was his life. He knew the lake like the back of his hand. He knew when to go into the deep and when to cast his net. He knew the seasons and how fish reacted to them. When Jesus asked him to put out in deep water, he said: “Master, we have worked hard all night and have caught nothing, but at your command I will lower the nets.” It was Peter’s way of expressing that his fishing skills have not gained him anything that night. So when there was a catch of fish that was tearing his nets at the command of Jesus, he realized that he was nothing compared to Christ. In fact, he realized he was a miserable sinner. Theologians like to point out that it is only when we cast a light on our souls, the way light is cast on a car windshield, that we see the dirt and grime on it. This is what Peter saw of his soul to have elicited such a response.

Christ, who is God from God, and light from light indeed has such a tremendous effect on all of us. His mere presence allows us to see ourselves with respect to him.  Even before Christ was born he had such effect on others. When St. John the Baptist was still unborn in the womb of his mother, St. Elizabeth, he leapt (the verb means “twirling dance” in Greek) when he came into the presence of the unborn Jesus in the womb of Mary. Many years later John would express what he couldn’t do inside the womb: “there is one among you whom you do not recognize, the one who is coming after me, whose sandal strap I am not worthy to untie.” (John 1:26-27) It is the same sentiment that Peter shares: I am not worthy.

We have to consider what this miracle is all about. There was no need to feed people because we are not told they were hungry. It leaves us with the consideration that Christ wanted to teach a lesson. The clue to this is what Christ tells Peter next: “Do not be afraid; from now on you will be catching men.” The lesson must have been clear to Peter: if Christ tells him to fish he will fish with success beyond his skill and efforts. So if Christ tells him to catch men, he would also be successful beyond his power. It is a parable through an example.

“Catching men”, of course, is a metaphor for the mission of evangelization that Christ would give the Church before he ascends to heaven. We have to remember that the apostles were fishermen, and no one of the elite took them seriously. One apostle was a zealot. Another was a tax collector who probably was one of the learned ones aside from Judas Iscariot the treasurer who stole from the common fund. Several messiahs made their claim around the time of Jesus and they and their followers were considered subversive by the authorities and were put to death. This is why the apostles were cowering in fear when Jesus was arrested: they were afraid that they too would be rounded up and crucified. But that didn’t happen. In fact, we never hear of the Romans or the Sanhedrin rounding up the apostles. It is because they were nobodies. If we looked at them today, we would hardly think they could continue Christ’s work. They seemed so impotent, and so they were left alone.

But, on Pentecost, when the Holy Spirit breathes life into the Church, a big change happens. They are no longer cowering but in the midst of the public evangelizing and speaking in tongues. Their preaching is so good that we are told three thousand were added to the Church that very day. (Acts 2:31) It is a reminder to us that we must discern what it is God wants us to do, for if we do it and participate with the grace he gives us, we will reap far beyond our own power.

God wants us to help him

Jesus could have just unveiled his divinity, as he did during the Transfiguration, to the entire world. That would have surely made them believers. But that would have also brought them to a position wherein they did not have a choice to believe. Free-will is the very rule God applies to us because if there is no free-will, then we can’t choose to love freely and that would just make us puppets or robots. So instead of this, Christ chose to invite humans to take part in his work of evangelization. We are called to live in the Trinitarian life with God, and by doing Christ’s work, with the help of the graces given by the Holy Spirit, we do. Just like a father delights in the good work of a child, so does God delight in our good works too.