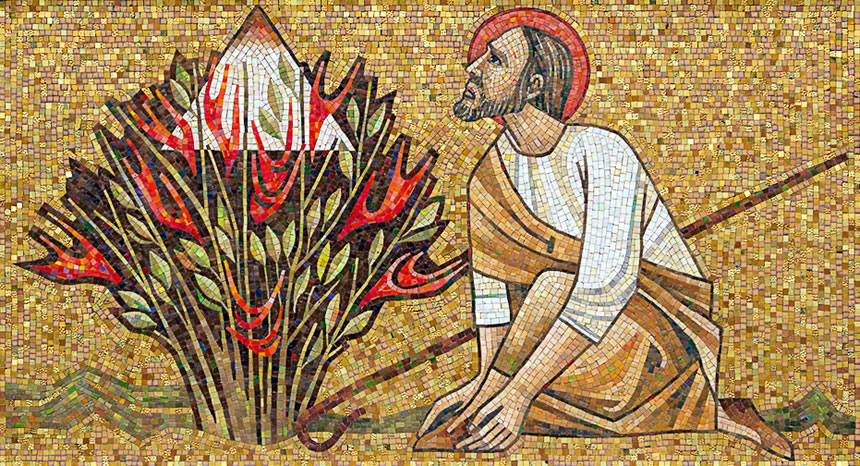 We have to remember that the time of Moses was polytheistic – people worshipped many gods – and it was natural for them. So when God asked Moses to do things, he naturally wanted to know which god was talking to him. The interesting thing is that God doesn’t give his name, but his nature: “I Am who Am” or“YHWH" in Hebrew.

Theologians like to explain that once you give your name, someone can call on you. When you have someone’s name, for example, you can call his or her attention by calling his or her name. It gives you a certain “power” over that person. But God is all powerful and, therefore, we should not have any “power” over him, thus, he doesn’t give us his name.

What he gives us, instead, is his nature. By saying, “I Am who Am” he is telling us that it is his nature to be. In short he is existence itself. By this “name” he reveals his eternal nature where he had no beginning  and will have no end. He is existence itself, and the source of all existence, but he did not give himself existence – he just always was. Saint Thomas Aquinas said it so eloquently: God is “the sheer act of being itself.”

By revealing his nature, he tells us that he is THE God if everything owes their existence to him. If there are no other gods that can rival that, then that would mean there are no other gods: he is the only one worthy of that title. This is why we attribute all acts of life (existence) as God’s prerogative. Once we understand God’s holy “name” we can then understand why Catholics shy away from playing god by deciding who lives or dies. This means any unnatural way of conceiving is taking away God’s prerogative for life. It also means that killing anyone born or yet unborn removes God’s prerogative for taking the life that he gave.  By doing these things, we make ourselves “god” and that, in essence, is what sin is about, isn’t it?

The Hebrews respected God’s name using very extreme means. In order to avoid going against the second commandment to not use the holy name of God in vain, they changed all the instances of  “YHWH”, in holy scripture, into “Lord”.  It was a way to show reverence in his name and all that it meant. This, of course, we inherited as Christians, but the New Testament helps us understand more of God’s name. The Gospel of Matthew tells us:

She will bear a son and you are to name him Jesus, because he will save his people from their sins. Matthew 1:21

To put this in context, Joseph found out Mary was with child, and in a dream, an angel reassures him that her son is from God, and instructs him what name he is to give it.

Just to side track a little bit, In Jewish tradition, the Father is the one who gives a name during circumcision. By doing so, a man publicly announces that the child is his and he is the child’s father. So by giving a name to Mary’s son, Joseph becomes Jesus’ father, and Jesus becomes his son in a real sense. So although Joseph is not the biological father of Jesus, by giving him a name, he “adopts” him in a very real fatherly sense. Since Joseph is from the royal line of David, by doing this Jesus inherits this lineage so he can be called, "Son of David.” This should give us some insight about baptism (which St. Paul replaces circumcision in Colossians 2:11-12) that when God gives us a name, he is adopting us in a very real sense. We, through baptism, become real children of God. And as Jesus inherits the lineage of Joseph, we too inherit the “divine lineage” of God as a gift from him. This means that through baptism sanctifying grace is restored and we share in God’s divinity. (We remember that the minister is not the one giving us a name, but he is a proxy for God. The words, “I baptize you in the name of the Father, and of the Son, and of the Holy Spirit” indicate that he is a“stand-in" for God.

Going back to God’s name, it is revealed by the angel that the child of Mary should be named “Jesus”. The angel indicates why: because he will save his people. We are told that in Hebrew the name “Jesus” means “God Saves.” However a more literal translation is “I Am Saves.” Pope Benedict XVI, in his book Jesus of Nazareth: The Infancy Narratives says that God is completing his Old Testament “name.” It, therefore, links the Old Testament with the New.

This gives us a new perspective on God then, as revealed by him. He is not just an almighty eternal being, but a merciful one, too. We have to remember this every time we mention the name of Jesus in our prayers.

Image from the original photography of Mark Scot Abeln entitled Resurrection Cemetery, in Affton, Missouri, USA - mosaic of Moses and the Burning Bush. https://www.flickr.com/photos/msabeln/5499571493/  Photo is cropped for use in this article.