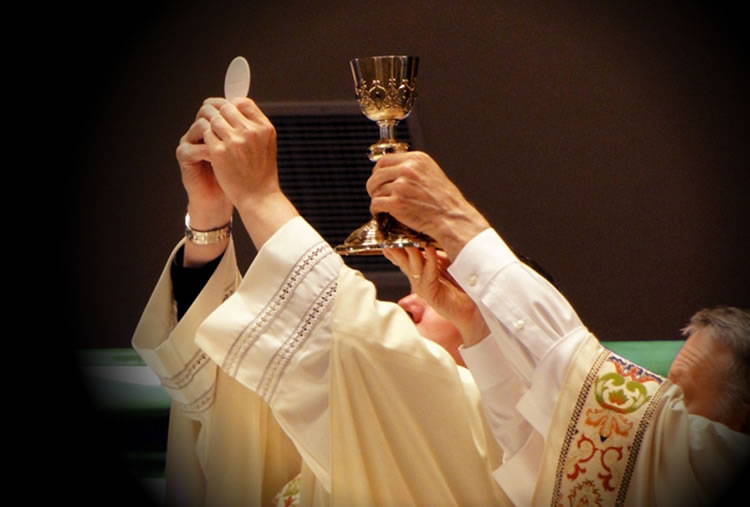 There is a beautiful commentary by Arch. Fulton Sheen on the Institution of the Eucharist. In his book, Life of Christ, he writes:

Our Lord never told anyone to write about his redemption, but he did tell his Apostles to renew it, apply it, commemorate it, prolong it by obeying his orders given at the Last Supper. He wanted the great drama of Calvary to be played not once, but for every age of his own choosing. He wanted men not to be readers about his redemption, but actors in it, offering up their body and blood with his in the re-enactment of Calvary, saying with him, “This is my body and this is my blood;” dying to their lower natures to live in grace…”

For us Catholics, the Eucharist is a re-presentation of Calvary in a sacramental way. It doesn’t mean we are brought back in time; instead, the sacrifice in Calvary is made present to us by the elements of the sacrament, namely Christ’s body and blood.

This is something that might be difficult for us to understand today. But for the apostles, who were Jews, they understood the notion of a special type of “remembrance.” It isn’t a mere remembering, but putting oneself in the event they are “remembering.” This type of remembering is called zachar. This is exactly what the Passover is: those who partake of it act as if they were there that very night of the first Passover in Egypt. So when Christ commanded the apostles to “do this in remembrance of me,” they understood that Christ was transforming the Passover meal into his own. Instead of pouring out the blood of the Passover Lamb, it is the blood of Christ – the paschal lamb – that is poured out. Instead of eating an unblemished lamb, we eat Christ, the unblemished Lamb of God.  We no longer remember the eve when God freed his people from Egyptian bondage, but we remember the time God freed us from the bondage of sin and death.

During mass, then, we shouldn’t be mere spectators as if watching some performance art in front of us. Instead, we should actively join the sacrifice of Christ. The liturgy, such as the mass, is a formalized prayer to the Father. We, the mystical body of Christ, join Christ the head in his sacrifice to the Father. The Ascension of Christ is a manifestation that the Father has accepted this sacrifice. So when we join Christ in this act during the mass, we are sure the Father accepts our sacrifice too, for aren’t we part of Christ’s body already in heaven?

Let us then offer to God all the work we’ve done, all the joy we experienced, and all the sufferings we’ve encountered. We can offer also our life and our possessions. Whatever God has given us, we offer it back to him. Offer to him the small things and the big things. The Eucharist is a thanksgiving, and isn’t this what we do when we are so thankful – that we give things to the person to whom we are thankful?

The proper time to unite our sacrifice to Christ’s is when the priest raises the host and the chalice and says the doxology, “Through him, with him, and in him, O God almighty Father, in the unity of the Holy Spirit, all glory and honor is yours, forever and ever.” We assent to this by saying, “Amen.” Say it loud or sing it loud. This is that moment we formally participate in Christ’s sacrifice in the liturgy. Legend has it that early Christians would say it so loudly that pagan temples trembled. Let us say it loudly, too, today so that the evil forces tremble in fear when they hear it.

Mass is boring for you? How dare you! That’s because we’ve made ourselves mere spectators at mass – the greatest of activities a human can ever do. Let’s put our minds, hearts, and souls into it. Let’s participate in it, and experience how alive the mass becomes.