Why the Pelican is a symbol of Christ 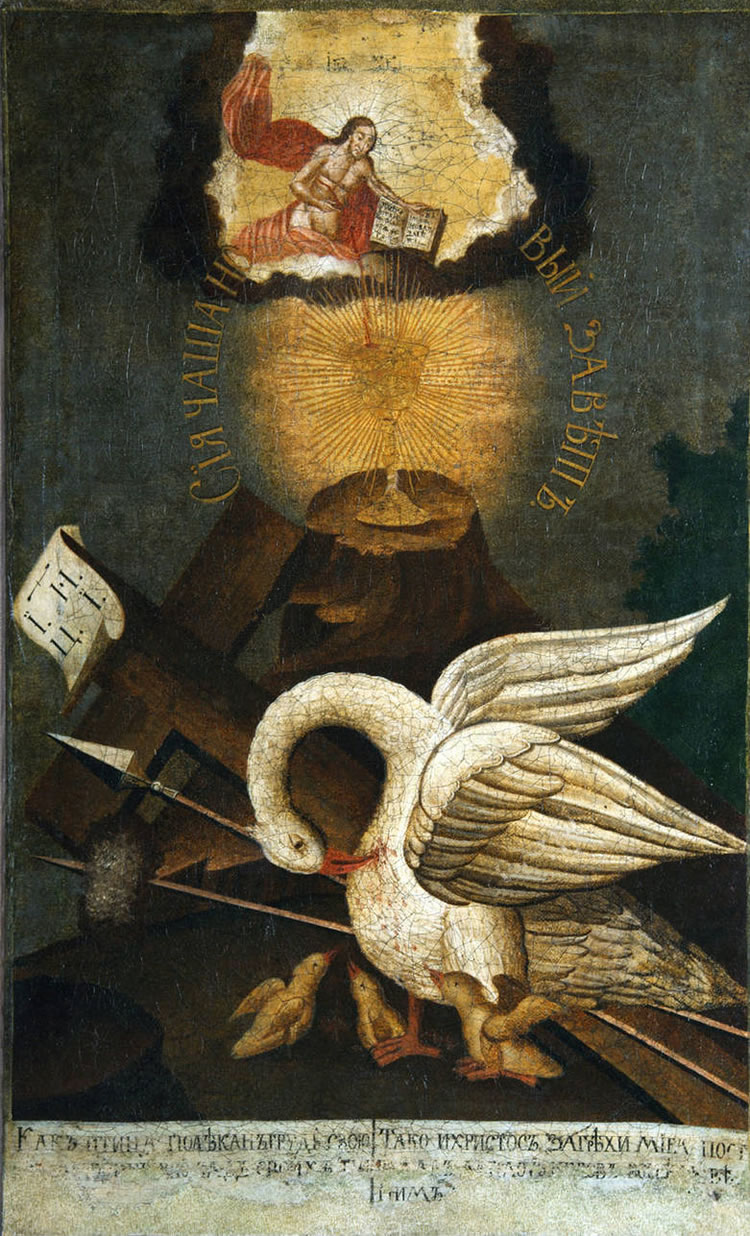 Quite often, we come across some really strange symbolism in Christian art. One of them is the fish with the Greek letters ΙΧΘΥΣ that transliterates to IXTHUS, which is the Greek acronym for Jesus Christ, God’s Son, Savior. Another is an anchor, which symbolizes hope. Another is a peacock, which is a symbol for Christ because there is a myth that the flesh of peacocks never decays.

Another bird that is used as a symbol for Christ is the Pelican. In older times, the Pelican was believed to have pecked on its own flesh to feed it to its starving chicks so they don’t die of hunger. This became a symbol for Christ because he feeds us with his body and blood in the Eucharist. Most of the time, the Pelican is depicted tearing flesh from its own breast to feed the bloody chunks to its children.

At the top of this Russian painting, we can see Christ pouring the blood that comes from his side onto a chalice on top of a hill that symbolizes Calvary. In the lower part of the painting, we see the instruments of the Passion: the cross, the lance that pierced his side, and a lance with a sponge that was dipped in vinegar and gall. In the foreground, we see a pelican ripping chunks of flesh from itself and feeding it to its chicks. The use or parallelism illustrates that the way the Pelican feeds his own body and blood to his loved ones, is the same way Christ feeds himself to us whom he loves dearly.

The symbolism runs deep because it is deeply rooted in Soteriology – the branch of study that deals with salvation. In this study, humans were never meant to die. However, as an effect of original sin, humans have to die when the soul separates from the body. God told Adam that if he eats the fruit of the forbidden tree, he will “die the death.” In the original Hebrew, the literal translation is, “you will die die.” Since there are no comparatives and superlatives in Hebrew, the way they emphasize degrees of something is by repeating the word. The more it is repeated, the higher the degree. For example, when the angels in heaven worship God with the words, “Holy, holy, holy,” it is a way of saying that there is nothing holier than God. Since God is life, and the source of all life, separation from him means death. So, in the same syntax, when God told Adam he will “die die,” he meant a worse degree of death – not just a separation of body and soul, but the eternal separation of the soul from God.

In this context, when Christ feeds us with his body, he gives us the antidote for the poison (the effects of original sin) that corrpted our nature. Since he is God – life itself – he feeds us with life. For as long as we worthily feed on his flesh, we are eating life. Since we become what we eat, we become life itself so we won’t die the death. This is a simplistic way of understanding this. A deeper way to see this, is if we eat the flesh of Christ, we become Christ himself. No longer are we disfigured by sin but configured to Christ. We are brought back to our original image and that is the image of God. In this image we are recognized by the Father the way he recognizes Christ; and what good Father will not welcome his children with warm hugs and kisses when we come knocking at his door?

If the Eucharist can produce such effects, then it isn’t just a symbol because symbols don’t do that. So if the Eucharist does what we believe we say it does, we should hunger for it. We should go to it in droves and make it the center of our day every day.

Doctrine Jesus Original Sin
Share this Post:
Previous Article
Our Lady of the Rosary and the important Battle of Lepanto
Next Article
Understanding Predestination