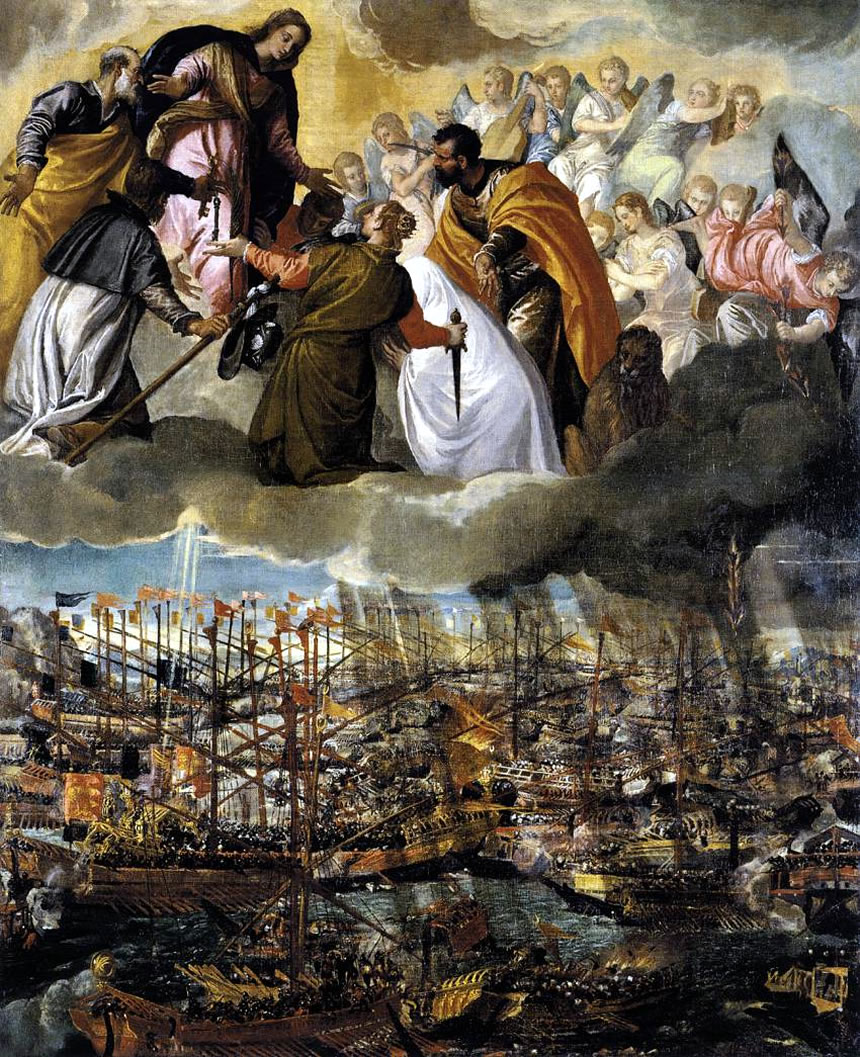 October 7 is the day Catholics celebrate the Feast of Our Lady of the Rosary because, through her intercession, Christian Europe was forever spared from the Muslim invasion on this day. Here is an excerpt from the book A Sky Full of Stars: Knowing Our Lady Through Her Titles in the Litany that narrates this event, and why we also call her Help of Christians:

The title of helper has been used to invoke Mary throughout the ages but became popular starting in 1571. During the years leading up to this, Christian Europe was struggling against the invasion of the Ottoman Empire. The Empire controlled most of southeastern Europe, western Asia, and Northern Africa – and it was expanding its borders in the west. Muslim Turks fought their way to establish strongholds, thus threatening Christianity in Western Europe.

One such city was Famagusta in Cyprus that the Venetians controlled. It was a wealthy city and held great commercial significance. The Empire had unsuccessfully tried to capture it in prior years. However, with a stronger army and navy, Turks sailed to the city and bombarded it continuously for almost eleven months. Christianity suffered a devastating blow when the city fell in August of 1571.

Not having yet recovered from the defeat, Pope Pius V was alerted that Turks would launch a naval attack from Lepanto and sail to Italy. To avert this impending invasion, he assembled Christian armies from all over Europe to defend the remaining Christian nations. Admiral John of Austria would lead the defense and King Philip II of Spain would fund it. While Spain also contributed ships to this effort, the Venetian Republic provided most of the vessels. They were part of the Holy League made up of the Republic of Venice; the Spanish Empire; the Papal States; the Republic of Genoa; the Duchies of Savoy, Urbino, and Tuscany; the Knights Hospitaller; and other smaller groups.

The Pope also turned to the Mother of the Church in this endeavor, asking her to defend the Kingdom of her son. So, for this cause, he initiated a prayer to Mary, Help of Christians.

Two hundred six galleys and six galleasses (larger galleys) crewed by almost 85,000 men and women sailed from Messina to meet the Turkish threat they knew was leaving from a naval base in Lepanto. On 7 October 1571, the ships of the Holy League met the Ottoman fleet in the Gulf of Patras. The enemy fleet consisted of 222 galleys and 56 smaller vessels operated by a force of 84,000 men and women.

The naval combat raged on throughout the day with the Holy League winning the melees. Though smaller isolated fighting continued until the night, it was clear that the battle went in favor of the Christians. This victory was of great importance because it was so devastating to the Ottoman Empire that it slowed down to a halt any Ottoman military expansion into Western Europe. This naval conflict was to be known as the Battle of Lepanto, and the Christian victory there is attributed to Mary, Help of Christians.

The painting above by Veronese was commissioned by Pietro Giustinian of Murano who took part in the naval battle. The painting was finished in 1572, just a year after the event. It shows Saint Peter, St. Roch (a patron saint of Venice), St. Justin, and St. Mark (associated with Venice, and depicted beside the Lion because he starts his Gospel with John the Baptist “roaring like a lion in the dessert.) They are imploring the aid of Mary, who as a result of their intercession, has asks her angels (on the extreme right) to help the Christians by figuratively hurling flaming arrows on the Turkish fleet. Truly, since the Church is the mystical Body of Christ, how can the mother of Christ not help and protect the Church for it is Christ, her son, himself?

Angels Church Mary
Share this Post:
Previous Article
Why can't the Father forgive us if we don't forgive others?
Next Article
Why the Pelican is a symbol of Christ

Feast of the Guardian Angels