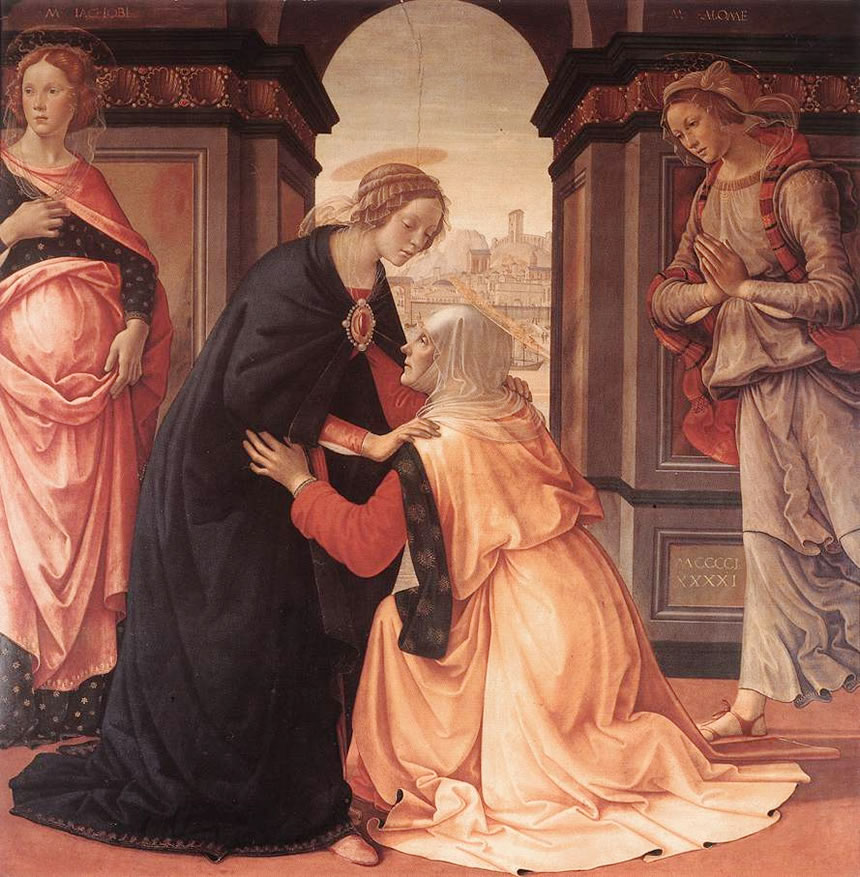 In the Annunciation, the Angel Gabriel invited Mary to become the mother of the Messiah. In his message, he said Elizabeth is six months pregnant. (Luke 1:36)  After Mary accepted this role, the next thing we know is that she goes in haste to visit Elizabeth and stayed there for about three months (Luke 1:39, 56)

One has to put together the two pieces of information: Elizabeth was six months pregnant, and Mary stayed with her for about three months. It is almost impossible to miss the conclusion that Mary went there to help Elizabeth come to full term. After knowing she will be the mother of the long-awaited promised Messiah, Mary doesn’t think of herself at all. Instead, she goes to help her cousin, and she goes “in haste”. We have to see in this the selflessness of this teenager whom we call Our Lady. She isn’t a Queen that lords it over her people, but a Queen who serves like a slave. She is very much modeled after her son who is God that became a slave for us. How can we be arrogant in anything when she, who we see as the realization of God’s hope, isn’t?

We are told that when Mary entered the house, the unborn John the Baptist leaped in the womb of Elizabeth. It would already seem that John was excited to fulfill his role as the one who would announce the Messiah. One thing to take from this is that the unborn are persons already. As Catholics, we believe that from the moment of conception, a human being with his unique identity is alive in his mother’s womb. If this were not true, then it was just a piece of tissue leaping in Elizabeth’s womb. If Mary went in haste after Gabriel told her Elizabeth was six months pregnant, Jesus must have just been a few weeks old – literally an embryo! If Jesus wasn’t a person already, then John would just be leaping because he recognized some tissue in Mary’s womb.  The unborn are the most helpless people in the world because they are not capable of defending themselves, and so we must.

The word “leap” is a really bad English translation because the Greek word means “a whirling dance”. In fact, it is the same Greek word used for the dance that King David did when he brought the Ark of the Covenant into Jerusalem (2 Samuel 6). First-century Jews would have seen a lot of similarities between The Visitation and the entry of the Ark into Jerusalem – and Saint Luke seemed to make sure of that in his Gospel. King David “leaped” in front of the Ark when it arrived, while John the Baptist “leaped” when Mary arrived. The Ark was greeted with shouts of joy, while Mary was greeted with Elizabeth’s loud greeting. And the Ark stayed in the hills of Judah for about three months while Mary also stayed for about three months.  In this sense, the Ark is a foreshadowing of Mary. The Ark contained manna, the bread from heaven; the Ten Commandments, the word of God in stone; and the rod of Aaron symbolizing the High Priest.  Mary is the ultimate Ark of the Covenant because in her womb is Jesus who is bread from heaven, the Word of God, and the High Priest who represents us all. If the Ark foreshadowed Mary, then we have to read in it that Mary was always part of God’s plan of redemption. As Catholics, we can’t treat her as icing on the cake one can choose to remove.  Yes, one can part take of the cake alone, but God meant that cake to be experienced with the icing – and how sweet it is! How can a Mother – Our Mother – be anything but sweet?

When Elizabeth greeted Mary, her words were peculiar: “Blessed are you among women!” It is peculiar because there are only two women in the Bible that are called “Blessed”. The first is Jael who drove a tent peg through the skull of Sisera. And the other is Judith who decapitated the head off of Holofernes. These women, called “blessed” by their people, crushed the heads of the leaders of Israel’s enemies. In both stories, they struck the first blow on these leaders and the kingdoms of these enemies eventually perished. These women are but faint glimpses of the ultimate head-crushing that God promised when he told the serpent, in the Garden of Eden, that the woman and her child: “will strike at your head while you strike at their heel.” (Genesis 3:15) Mary does the definitively crushing of the enemy’s head when she consented to be the mother of the Messiah. For at that moment when Jesus was incarnated in her, a man was conceived who would undo Adam’s disobedience and build a kingdom to replace the devil’s kingdom. This is why we see some statues of Mary with her foot crushing a serpent’s head. In the song she is about to sing, Mary says, “all generations shall call me blessed”. Indeed generation after generation has called her blessed, not because she is the mother of the Messiah, but because she gave her whole self to God to become the woman who would crush the enemy’s head. We cannot romanticize Mary as just a piece in the nativity scene doing cuddly things for Jesus. No, she is a warrior queen who strikes the first blow on the devil – the enemy of God’s people. Of course, it is Christ’s Passion and death that finishes it. We call her Our Lady, and so we must rally behind her in her continuous battle against evil and evil people.

It is interesting that Scripture tells us Elizabeth was filled with the Holy Spirit before she realized that Mary was the “mother of my Lord.” From this, we understand that she doesn’t come about knowing this on her own. Instead, it is a grace from the Holy Spirit. So even before Jesus was born, even before he taught, died, and resurrected; Elizabeth recognized who he was: he is Our Lord.  We, too, cannot recognize God on our own: we need the grace of Faith from the Holy Spirit. How we need to pray for Faith so we recognize God more and more each day.

After Elizabeth correctly identified Mary as “mother of my Lord” Mary burst into song. It is as if Mary was keeping a secret she felt was only between her and God. During her trip to Judea, she must have contemplated on what God’s plan for her was but couldn’t share it with anyone. But through Elizabeth’s greeting, Mary knew her cousin was in on that secret too and that she was free to share things with her. So she exploded with a song about the longings of Israel being fulfilled by God whom they humbly and utterly depend on. The Messiah is this fulfillment, but the song is also very appropriate for Mary because she is the faithful daughter Zion. After King David brought the twelve tribes of Israel together, it broke apart because some tribes fell back into idolatry. It was only Zion that was truly faithful to God. Once again, we see Zion as a foreshadowing of Mary in her faithfulness. And once again we look up to Mary as our model of fidelity to God. Should we not ask her help in our own fidelity to her son, Our Lord?