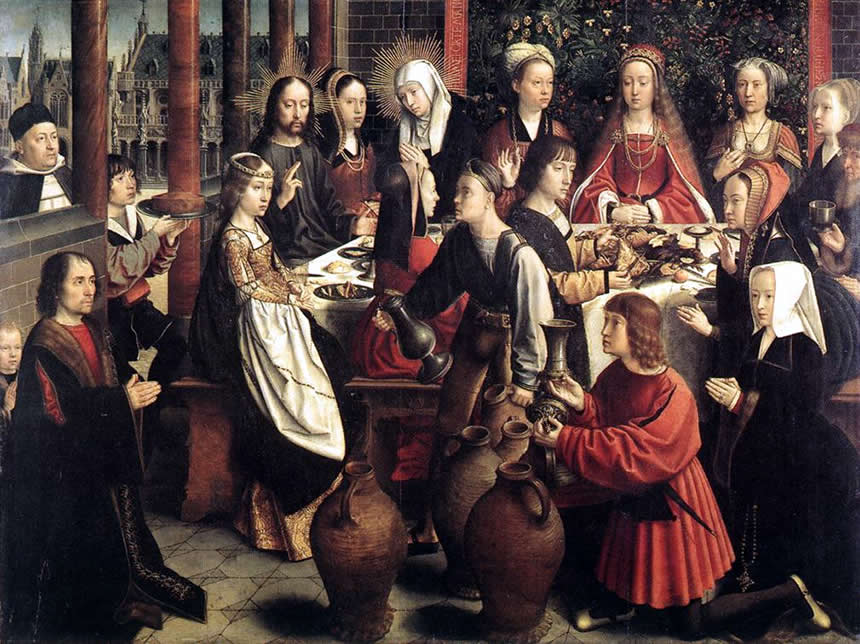 The Wedding in Cana (John 2:1-12) is an important event in the life of Christ because it reveals his glory through his first miracle, and can be seen in a Eucharistic context. The Catholic theologian Frank J. Sheed brings up some interesting points, which I will include in this article.

The Gospel of John paints Mary as the new Eve. It does this by alluding to a new creation wherein Christ is the new Adam, and Mary is the new Eve. By showing parallel events in counting and event of the “days”, he is alluding that the dawn of Christ’s birth is the dawn of the new creation. For example, both Genesis, and the Gospel of John start with, “In the Beginning...” and in both books, there is talk about light. Then where Genesis talks about the Spirit of God hovering over the water, John talks about the Spirit of God coming down during the baptism of Christ with water. We can see this parallel even when counting the days. John says, “the next day...”(John 1:29), “the next day..”(John 1:35), “the next day...” (John 1:43), and finally, “On the third day a wedding took place in Cana in Galilee” (John 2:1) In Genesis Adam addresses Eve as “woman” after the sixth day. Likewise, on the seventh day of John’s Gospel, at the Wedding at Cana, Jesus addresses Mary as, “woman.”

After the sixth day in Genesis, we also read of the Fall wherein Eve, after listening to a bad angel, prompted Adam to commit his first evil act. Likewise on this “seventh day,” in Luke’s Gospel, Mary who listened to a good angel (Gabriel during the annunciation) suggested that Christ does his first glorious act.

So a “new Adam” and a “new Eve” is a way of expressing the Catholic notion that we are saved through regeneration – that we must be born again of “water and spirit”. (John 3:1-15)  When we look at the genealogy of Jesus in the Gospel of Matthew (Chapter 1), we read he is a new creation for he has no father except God just as Adam was. Mary, too is a new creation, for we believe she was born immaculately – that is without the stain of original sin. It’s as if she is Eve herself for they were both created fully holy and justified.

Of course we can’t all be immaculately conceived, nor can we all have God as our biological Father. However, we believe that through baptism we die with Christ (hence, we are immersed three times or water is poured over our head three times, to symbolize that die with Christ in his three days of death), and by doing that we resurrect with him as a regenerated person who is now a son or daughter of God.

The interesting thing about this episode in Cana is that when Mary told Jesus there was a problem with the wine, he replied, “Woman, how does your concern affect me?” It is an idiomatic expression that means they best ignore it.  Christ then became quite explicit as to why they should leave it alone. He said, “My hour has not yet come.” That should have been the end of that, but then in the very next verse, Mary told the waiters to: “Do whatever he tells you.” Even more interesting thing is that Christ performed a miracle!

It seems impertinent of Mary to force her way. But that isn’t how we should read it, says Frank J. Sheed. We know Mary is humble of heart and she wouldn’t even dream of knowing better than Jesus. But how is it that Christ said his time has not come, but in the next moment it has. Sheed offers an explanation for this. He says that Mary, in her humility, only followed the promptings of the Holy Spirit. Then Christ, at that moment, also realized that this was THE time, and so performed the miracle.

We have to realize this was no small task for Mary. Until this point, Jesus was not a public figure. He was virtually as obscure as the town of Nazareth where he was conceived and grew up. But by performing his first miracle, he started what was known to be his “public life” – a life where large crowds were pressing upon him all the time. In the two or more years that would follow, he would spend most of his time building his ministry with his apostles so he could train them for the Church he would build upon them.  He would no longer be spending much time with Mary. Gone were the days when he would go home and they would spend dinner together, talk about the day, and casually enjoy time with each other. All that would change. She could have just ignored the prompting of the Holy Spirit and kept Jesus for herself, but we can see that this was the way Mary was going to give us her son.  It must have been difficult for it is not easy for any good mother to give away her children. In a way, Jesus was her gift to us. As a mother, she must have suffered internally to give us this gift.

Finally, this miracle also has Eucharistic overtones. In Genesis when the lands became hungry from a famine, Pharaoh said about Joseph (the patriarch) the same thing Mary said: “... do whatever he tells you.” (Genesis 41:55)  Constant reading of the Old Testament reveals that God wants to feed his people, and Joseph was one of the chosen to do this.  He is a foreshadowing of Christ who will nourish us no longer with physical food, but with spiritual ones: his body, and his blood. During the Last Supper (which in the Book of Revelation alludes as a wedding banquet), the apostles in this Wedding in Cana would have remembered that if he can easily turn water into wine, he could likewise turn bread into his body, and wine into his blood.

Salvation History is made up of these recurring verses about how God wants to feed us. We have Mary to thank for, in a way, for she was the one who suggested this miracle that propelled Jesus into his public life. We have to be thankful, too, for through her unselfishness she gifted us with her son.