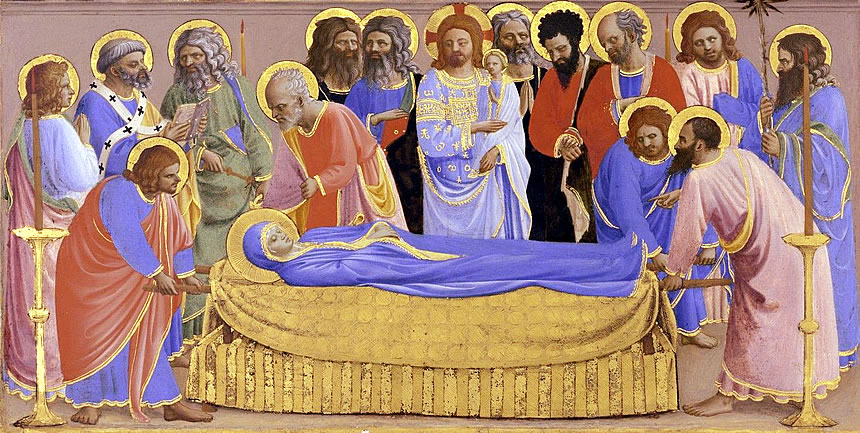 The word assumption means “to take up.” So the Assumption of Mary means we believe Mary was taken up to heaven, body and soul. Why is this important?

We believe that our body and spirit were never meant to separate. In God’s original design, they were meant to be together forever through God’s grace. The serpent lied to Adam and Eve when he said of the forbidden fruit, “you will not die if you eat it.” Ironically, falling into this temptation for self-preservation exhibited how Adam and Eve’s trust in God died in them. In a manner of speaking, they didn’t believe they needed God to live. They were deluded by the devil’s promise of self-sufficiency. Because God loves them, he gave them what they wanted – a life without him. Sadly, a life without him meant a life without grace too. How can grace (from the Latin “gratis,” which means “gift”) remain if the gift-giver is no longer there? Not that God is a sore loser who takes back what he has given, but that’s just how it works. He doesn’t impose his grace to those who don’t want it. Because of this, death – the separation of body and soul – became part of human nature.

We also believe that through his obedience to die Christ rendered impotent the poison of death. It is quite the opposite of what Adam and Eve wanted, which was to live. At the end of our life, our body and soul will still separate, but at the end of time, it will be joined together to stand before the Final Judgment. The devil tried to thwart God’s plan to separate body and soul, but God brought his original plan back on track through the suffering and death of Jesus. When we say Jesus is our Redeemer, he redeemed (bought back) this grace for our body and soul to live together forever in the presence of God.

This would necessarily mean that saints who are in heaven will have their bodies joining them in heaven. This is one of the primary reasons we venerate the remains of saints, which we call “relics.”   Because we know they will end up in heaven, we honor their triumphant bodies that will be with God the way we honor slain soldiers that fought the good fight.

Relics were sought aggressively in the early days of the Church. They reminded the faithful of their fate; that, and also because it drew crowds to churches. The larger the crowds, the more donations the church got, not to mention the income from tourism for the city the church is in.

Sometime in the fifth century, the Roman Emperor Marcian of Constantinople and St. Pulcheria desired to own the remains of Mary, the mother of Jesus. Since Christ ascended to heaven, he had no physical remains. So the next best relic would be that of his mother. With this in mind, they asked St. Juvenal to find it and acquire it for them. However, at the Ecumenical Council of Chalcedon in the year 451, St. Juvenal told them (through his investigation) that Mary died in the presence of the apostles. It was unfortunate that St. Thomas was not with the apostles at that time and at the time she was entombed. When he did come, he requested for the tomb to be opened. This they did but found it empty. It is from this that the apostles concluded that she was taken up to heaven. Although events of the Assumption described by St. Juvenal were not written down, this ended up as Apostolic Tradition and was handed down to us.

We need to understand what the apostles were thinking when they realized she was taken up. It made sense to them that the vessel that would hold the Son of God must be cleansed. Thus it is reasonable that Mary was created immaculate – devoid of any sin or even the stain of original sin. By cooperating with God’s grace, she remained sinless all her life. The separation of body and soul was the result of sin, so it made sense that she did not have to undergo this process. How can death – the result of sin – defile the Mother of God who is life itself?

It wasn’t a far-fetched idea that God would take her body at the end of her life for we read of God taking Enoch and Elijah the same way at the end of their lives. (Genesis 5:23, Kings 2:11)

St. John outlived Mary whom he cared for after Christ’s death. He is the author of the Book of Revelation that depicts Mary as the woman clothed with the sun, the moon at her feet, and crowned will twelve stars. As we read along it won’t be difficult to see that that woman is Mary who gave birth to a son who would rule all nations. What is particularly interesting is that John writes that God gave her wings so she can go to a place prepared for her. (Revelation 12:6,14)

The only other mention of this “place” in Scripture is also by the same author as he described the last supper. He quoted Jesus who said, “In my Father’s house there are many dwelling places. If there were not, would I have told you that I am going to prepare a place for you? And if I go and prepare a place for you, I will come back again and take you to myself, so that where I am you also may be.” (John 14:2-3)

What is this prepared place if not heaven? So John himself describes in the Book of Revelation, Mary “flying” to heaven with metaphoric wings.

So we now go to the question: why is this important? The answer is that the Assumption shows us how we were meant to die. For us who die in the friendship of God, our body and soul will be brought together at the end of time and be taken to the presence of God. We call Mary, “Our Hope.” Hope can be defined as the trust we have in God that he will do what he says he will do.  Mary is “Our Hope” because we see God doing what he promised in her Assumption.

Doctrine Mary Original Sin Scripture
Share this Post:
Previous Article
Mary the Morning Star
Next Article
How Samson and the Gate of Gaza foreshadow Christ and the cross