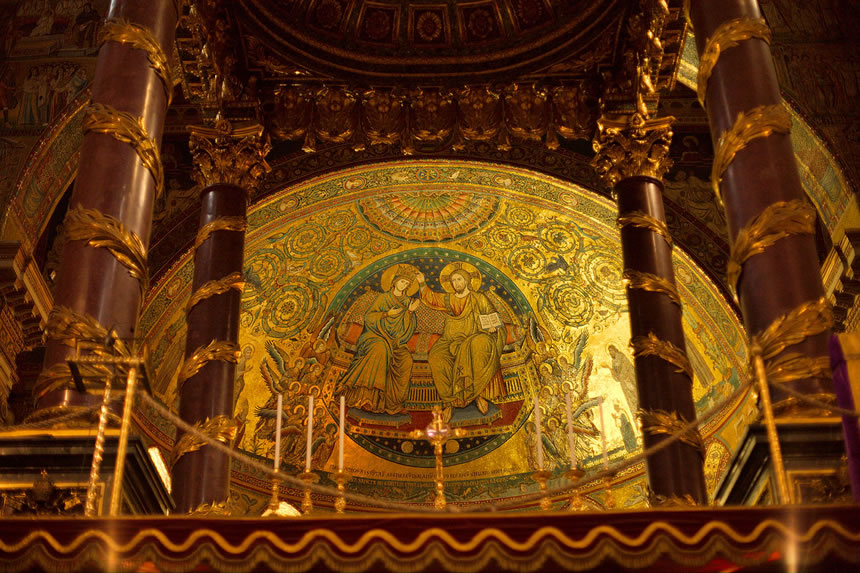 One might ask why do we celebrate the dedication of this particular church.  It has to do with a little Church History. In the first century, Christians professed Christ is Lord and were persecuted by Romans who insisted Caesar is lord. In general, Christians could not worship publicly and kept things under the radar. When the Edict of Milan tolerated Christianity, Christians came out of the woodwork, thrived, and began exercising their mental muscles. Now they had time to peruse Christ. While the divinity of Christ was never in question, how he is divine and how he is human became a constant source of argument.

It was a period of doctrinal turmoil when one movement after another presented different ideas about this topic. I man named Nestorius challenged the orthodox idea that Jesus is one person with two natures. He promoted the idea that two persons came together in Jesus, one was human and the other divine.  The next natural step for him was to challenge the title for Mary, “Theotokos” – God-bearer or “Mother of God” – because, he says, the divine person in Jesus was not a result of Mary who can only produce persons of a human nature.

There were two problems with Nestorius’ teaching. The first is there is only one person in Jesus, not two. The Second-person of the Blessed Trinity became man, and is the same person as Jesus. The second problem of Nestorius’ teaching is that mothers do not give birth to natures: they give birth to persons. A mother says, “I am a mother of that person”, they would never say, “I am the mother of that person’s nature.”

It was Cyril of Alexandria that went head-to-head with Nestorius on this matter. Eventually, Cyril brought this up with Emperor Theodosius II who called the council of Ephesus in 431 and there the council declared the teaching of Nestorius a heresy, and as a result of this, Mary can be rightly called “Mother of God.”

While this was going on, legend has it that Mary appeared in a dream to Pope Liberius and simultaneously to  a wealthy layman, Giovanni Patrizio. This prompted Giovanni and his wife with the desire to leave their possessions to the church. They prayed that Mary would show them how. Their prayers were answered for during the height of summer on August 5, snow fell on Esquiline Hill. They took it as a sign and there they built a basilica. For this reason, the basilica was once known as St. Mary of the Snow. (It is also called St. Mary of the Crib because it houses a reliquary for five planks of Jesus’ crib.)

The two stories dovetail when Sixtus III became the Pope in 432 when thereafter, he decided to undertake a major renovation of the basilica. Upon its completion, he dedicated it to the “Mother of God” – a way of celebrating and enforcing the declaration of the Council of Ephesus that Mary is Theotokos.

There are only four major basilicas in the Roman Catholic Church, and the largest of them is this basilica now known as St. Mary Major. (The other ecclesiastical basilicas are St. John Lateran, St. Peter, and St. Paul outside the Walls). When in Rome, you may need to look for it using its Italian name: Santa Maria Maggiore.

The title “Mother of God” does not elevate Mary to a goddess status – it was never used that way. Instead, this title safeguards Christ’s divinity. Thus, the dedication of the basilica is important because it reminds us that Jesus, the son of Mary, is God. That is what this basilica stands for.

The Sacraments are meant to make us more like Christ