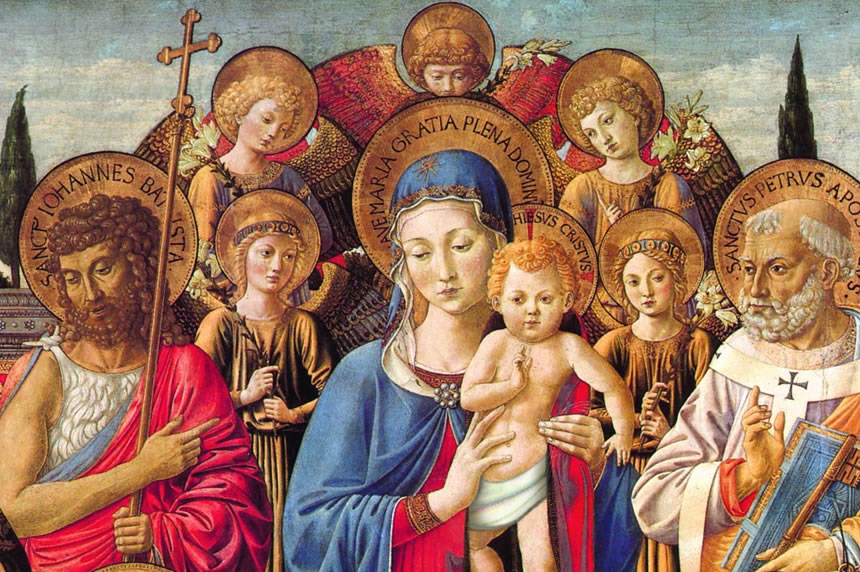 The title of Mary, Mother of the Church is not new – there is evidence that is has been used as early as the 4th Century by Saint Ambrose. Also it is an official title given by Pope Paul VI during Vatican II. However, Pope Francis declared that starting the year 2018, the Monday after Pentecost the Universal Church will celebrate this feast. This means prayers and the readings for the mass on that day can be specifically chosen to fit this occasion. Because the successor of Peter thinks this is important to celebrate, we ought to understand why.

There are two reasons why Mary is given the title Mother of the Church even if she did not give birth to the Church. The first reason is that she nurtured the Church in its infancy.

It is undisputed that Mary is the mother of Jesus. However as Christ hung on the cross, he gave his mother to the Church through the person of St. John. It is the chosen Gospel for this feast that quotes Christ saying: “Woman, behold your son; son behold your mother.”(John 19:25-31, Redemptoris Mater #47) The two of them did not think this was some figure of speech for Mary went home with John that very day.

We are told later that the side of Christ was pierced wherefrom blood and water flowed. All this imagery helps us see Calvary as a “New Eden.” The fall of mankind happened in Eden, and our redemption in the New Eden. We have Jesus, whom St. Paul refers to as the “New Adam.” In Genesis we read that Adam was put under a deep sleep, and from his side, God formed Eve – his bride. Adam called Eve, “woman”, so when Jesus called Mary “woman” it is no act of disrespect or condescension, but recognition that she is the “New Eve.”

The Church Fathers easily saw that the blood and water from the side of Christ (who was dead and rose again as if in a “deep sleep”) as the formation of the Church. Thus the Church is just like Eve who was formed from the side of Adam. And just as God breathed life into the nostrils of Adam, so did the Holy Spirit – as a strong wind – blew life into the nostrils of the Church on Pentecost. So, just as a newborn needs a mother for it to develop, the infant Church needed a mother to nurture her. In Catholic small-“T” tradition, we say Mary was that mother. Because one becomes a mother after birth, it seems only right to celebrate Mary as Mother of the Church on the day after Pentecost – the birthday of the Church.

From the Book of Acts, we read that Mary and the apostles prayed together. We can envision Mary as the rallying point of the apostles after Christ had ascended. Yes, Peter had the last say in terms of doctrine, but whenever the apostles wanted to know more about Jesus, there is no other person they could have turned to except Mary. The Infancy Narratives of Matthew and Luke, for example, could have come from no other source than Mary who “pondered and kept all these things in her heart.”

The mission of the apostles was to go out and tell the world of the Good News. After all, the word “apostle” means “one who is sent.” We can imagine they had good days and bad days. Peter’s first “homily” on Pentecost was met with hecklers, for example. We picture Mary as the person who would be there to listen to their stories, their frustrations, and their failures. Her words would encourage them, keep them strong, and keep them going. Her life was not one of comfort, so she had the practical authority to tell them that being a follower of Christ doesn’t mean he will remove their troubles. She would be there as someone whose unfaltering presence kept them going. Who does all these things if not a mother?

Because she acted as a mother, the apostles would have treated her as such. If Mary was not all this, we would not probably have a Marian devotion today for if it didn’t start from the apostles, it would not have started at all knowing how cautious the Church is in introducing new ideas.

Mother of the Mystical Body of Christ

The second way Mary is Mother of the Church is that it is the mystical body of Christ.

In the Old Testament, God has always presented himself as a bridegroom to Israel his bride. “For your husband is your Maker,” Isaiah proclaimed. In the New Testament Christ also spoke of himself as the bridegroom (Matthew 9:15) – the same God who opened his side from where the Church, his bride, came from.

In Genesis (2:24) we read of the description of marriage between Adam and Eve as being “one flesh.” This is why we say Christ and his bride, the Church, are “one flesh” that are inseparable from each other. Christ expressed this clearly when he said, “I am the vine, and you are the branches.”

This brings us to the idea of the Church as being the Mystical Body of Christ. Jesus is the head, and the Church is his body – as Saint Paul understood. They are inseparable from one another so much that the Catechism refers to this union as “the whole Christ” (CCC §795). Christ and the Church are one and the same. Saint Joan of Arc said it plainly: “About Jesus Christ and the Church, I simply know they’re just one thing, and we shouldn’t complicate the matter.”

Through this new annual feast, we should be reminded that Mary is our mother: Christ said so. Mary is not just a mother in some title, but a real mother we can to turn to. Just as she listened to the apostles and their disciples, so will she listen to each of us her children for we believe that she continues to exercise her maternal role in heaven. (CCC § 975) Just as a mother gives gifts to her children, Mary is the mediatrix from where graces (gifts) flow from.( CCC § 969, Lumen Gentium 62) While she increased the biological life of Jesus with her milk, she increases our spiritual life with graces.

If Christ gave Mary to us as mother, should we not treat her as such – the way the apostles did? Should we not go to her and confide the good things that happen in our life as well as our frustrations? Should we not ask her to intercede for material and graces we need? Should we not greet her each morning and “kiss” her goodnight before we go to sleep? If we do so, she can’t not but kiss us back.

Church Jesus Mary Typology
Share this Post:
Previous Article
How Samson and the Gate of Gaza foreshadow Christ and the cross
Next Article
Don't Miss These Symbolisms At Your Next Mass