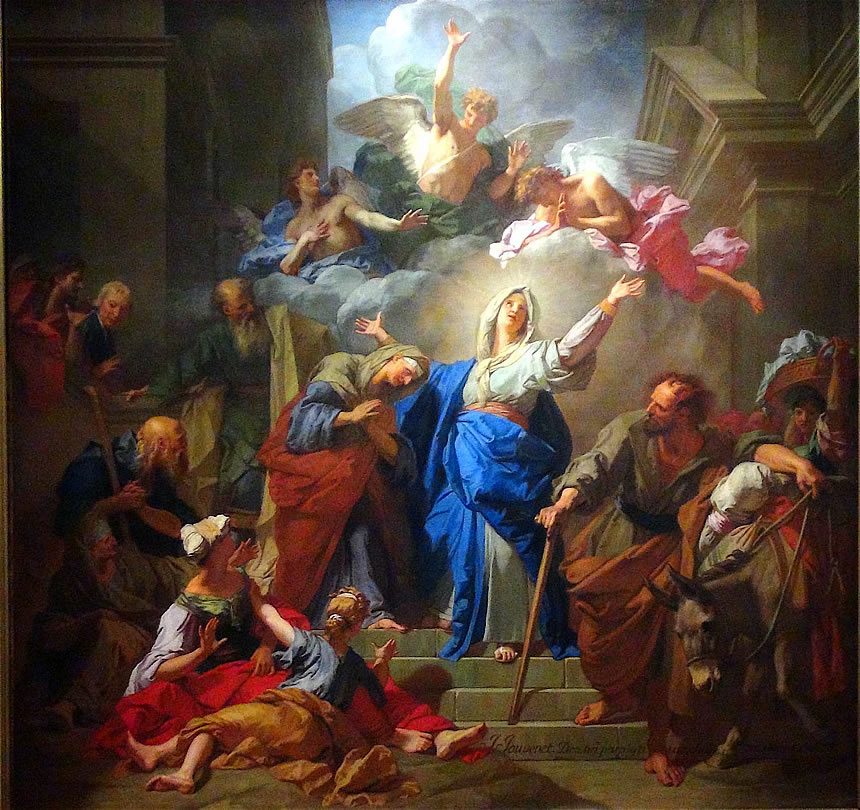 When Luke writes his account of the Visitation, he uses many parallels with the Ark of the Covenant entering Jerusalem – and for good reason.

The Ark was the most important artifact of Israel. It is an acacia box clad with gold inside and out. God gave the specifications to Moses who followed it right down to the rings on the sides so that poles could be inserted when it was to be transported. The Ark contained three things: a pot of manna, which the Israelites called bread from heaven; the word of God in the form of the tablets of the Ten Commandments; and the rod of the high priest that symbolized the priesthood. The glory of God would manifest itself above the Ark in the form of a cloud. When the Israelites went to battle, they always put the Ark in front of them as if it were a shield or weapon, and they were always victorious.

Once, God allowed the Ark to be captured by the Philistines who put it in a temple of Dagon, placing it beside the statue of Dagon. The head of the statue was found on the ground the next day. After reattaching the head to the statue, they found the head severed again, and this time its hands were broken off as well. Soon the citizens of the city broke out in tumors, so they sent the Ark to another city that soon broke out in tumors as well. And when transferred the Ark to another city, the citizens didn’t want to accept it, so they eventually gave it back to the Israelites.

After David united the tribes of Israel under one kingdom, an era of peace and flourishing followed. He wanted Jerusalem to be its central city, where eventually the Temple would be finished by his son Solomon. Executing this long-term plan, he asked his people to bring the Ark of the Covenant to Jerusalem.

They transported the Ark on a cart drawn by oxen and at one point it was about to tip over. A man named Uzzah stretched out his hand to prevent the Ark from falling but was struck dead on the spot. The mistake was the Ark was not supposed to be brought around by a cart, but by men using poles. In fear, David said, “how will the Ark of the Lord come to me.” So he paused the plan for a bit and let the Ark stay in the house of Obed-edom in the hills of Judea.

About three months later, David continued to bring the Ark into Jerusalem, this time properly. As it entered Jerusalem the people of the city greeted it with shouts of joy. David danced a whirly dance in front of the Ark as he guided it inside the city.

Luke uses this exact imagery when he writes how Mary visited Elizabeth because he is using Old Testament events to show how Mary is the new Ark of the Covenant. This is because when the Second Person of the Trinity was incarnated in her womb, inside her was: Jesus, the bread of life who we eat in Holy Communion; the Word of God as John’s Gospel refers to Christ; and not just a symbol, but the high priest himself who represents all of humankind when he offers his own life as a sacrifice for the expiation of sins.

When Elizabeth greeted Mary, it was with a loud shout of joy, and said, “how is it that the Mother of my Lord comes to me?” And John the Baptist leaped in her womb. It is isn’t a jump, but translated literally from Greek it is the same whirly dance that David made in front of the Ark. Finally, The Gospel of Luke tells us that Mary stayed with Elizabeth in the hills of Judea for about three months.

In the Annunciation, the Angel Gabriel told Mary that Elizabeth is on her sixth month of pregnancy. So if Mary stayed with her for three months, it alludes that Mary stayed to help her cousin until Elizabeth gave birth.

What is striking about this is the Angel Gabriel told Mary of her son that, “the Lord will give him the throne of David his father, and he will rule over the house of Jacob forever, and of his kingdom there will be no end.” This is the sign of God’s Messiah that they have waited for: a king in the line of David who would rule forever. Mary understood this.

The other thing that must be mentioned is that in the Davidic Kingdom, it is the mother of the king who is crowned queen. Mary understood that if her son would be a king, then she would be the queen of his kingdom.

There are three lessons we can glean from these. The first is if Mary is the new Ark of the Covenant, then she must be treated with utmost respect above anything else in the kingdom apart from God. The Lord did not demand the Israelites to worship the Ark, but to respect it. Those who did not give it due reverence were struck down with tumors or death. The second is we should learn to put Mary in front of our battles for she guides the way to victory in our physical, emotional, and spiritual struggles. The third is despite knowing she is the queen of Christ’s kingdom, Mary’s first instinct is to go in haste to Judea to help Elizabeth. She shows us that her queenship is one of service that mirrors the kingship of Christ who came to serve.

Mary Scripture Typology
Share this Post:
Previous Article
The Mystery of the Blessed Trinity
Next Article
Mary, Help of Christians

The Richness of the Annunciation in the Catholic Context

Did you ever wonder how Mary is a Tower of Ivory or a House of Gold?