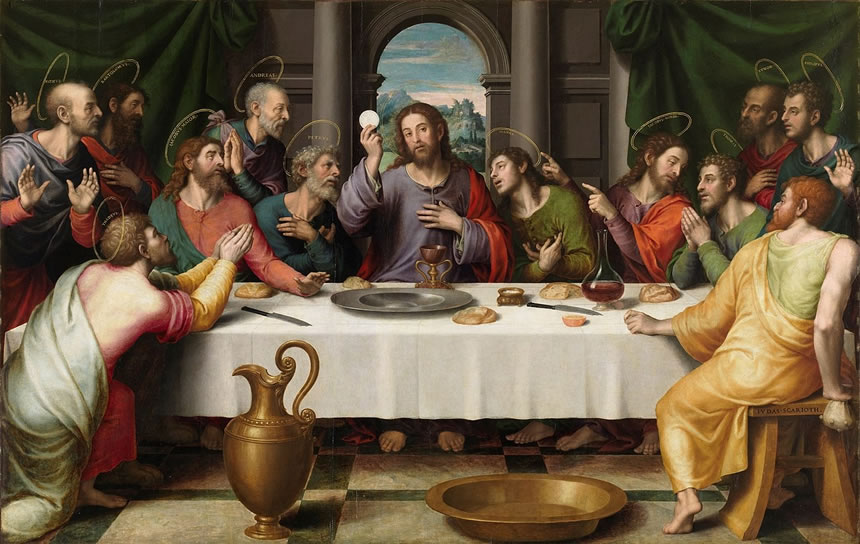 As Catholics who have gone to countless masses, we know the order of the different parts of the mass, and the responses to the priest’s prompts come quite instinctively. But most Catholics might miss the symbolisms built in the liturgy because, well, we never knew they were there. Listed here are some of those symbols in words, objects, and gestures.

The nave is the large space in front of the altar where the congregation stays. The word nave comes from the Latin navis that means ship. The Church uses this word to describe itself metaphorically because she is like a ship that brings us safely from this world to the next – just as the Ark did for Noah and his family. If you are in a gothic church, look at the ceiling because its exposed beams look like the keel of a wooden ship for the same reason. 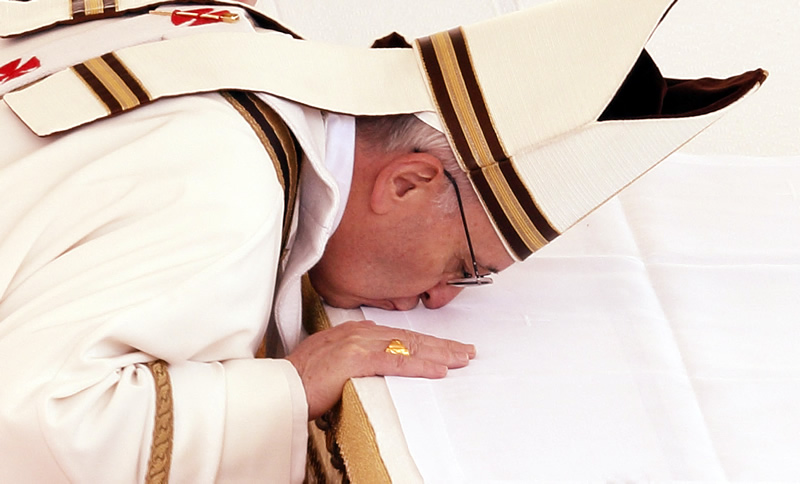 Before the beginning of the mass, the priest kisses the white cloth of the altar. The cloth represents the burial cloth of Christ, and the kiss represents the betraying kiss of Judas. By these, we are immediately asked to remember that the mass is a representation of Christ’s Passion.

The light of the candles remind us that Jesus is the light of the world. Sometimes incense is used and the fragrant smoke fills the entire church. Smoke rises and it symbolizes our prayers rising up to God. It is reminiscent of the smoke rising up from sacrificial pyres in the Temple where the fragrant fat from the animals (that smelled like a lip-smacking roasting barbeque) rose to heaven. The smell reminds us of the “fragrance of Christ” – that inimitable quality of Christ that attracts us to him. It also reminds us of the chrism oil we were anointed with during our baptism to acquire that same quality. Pope Benedict XVI liked to remind us that the smoke is also meant to obscure our sight – an allegory for our love of mystery where we acknowledge that we do not possess the capacity to fully understand God and his mysteries. It is a confirmation that God is above (but importantly not outside) our level of reasoning – and that is perfectly okay with us.

The Word, and the Eucharist 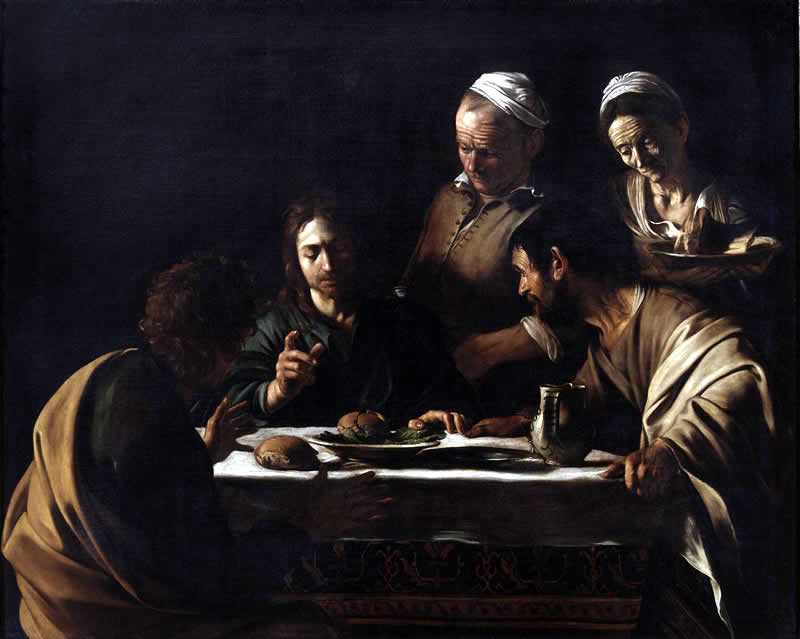 Every sacrament starts with the Word of God that prompts our desire to receive grace. In the Gospels and in the Acts of the Apostles, we read that people listen to the disciples “opening” Scripture, and they respond to it. For example, the baptism of the Ethiopian Eunuch is a response to Philip opening Scripture to him. Another example is Christ explained Scripture to the two disciples walking to Emmaus before he “broke bread” with them. This is the structure of the mass, isn’t it? It is a Qahal where a king calls his people to listen to him, and who respond by wanting to receive the Eucharist. In both parts of the mass, then, we receive the word of God in Scripture, and the living Word of God  – Jesus Christ – in the Eucharist.

Hands over the Host 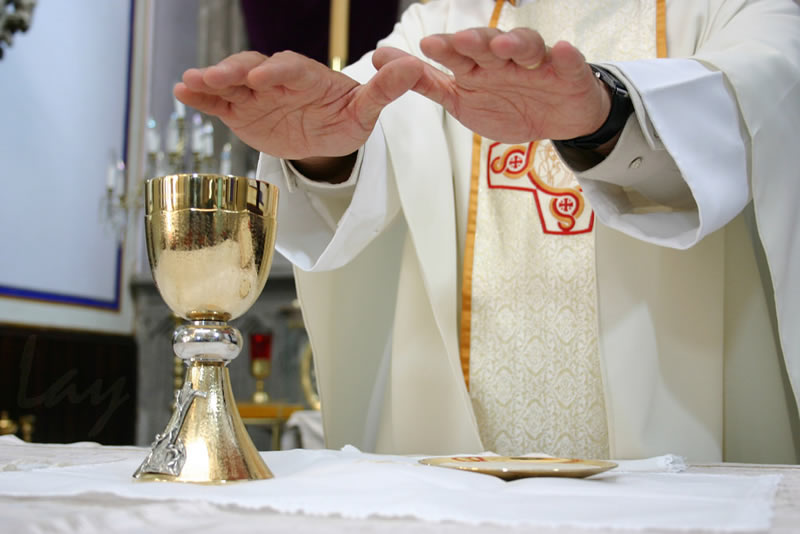 The priest holds his hands over the bread and wine with his thumbs overlapped in the shape of a cross. It is a symbolism of the sins of the world that Christ took into himself. 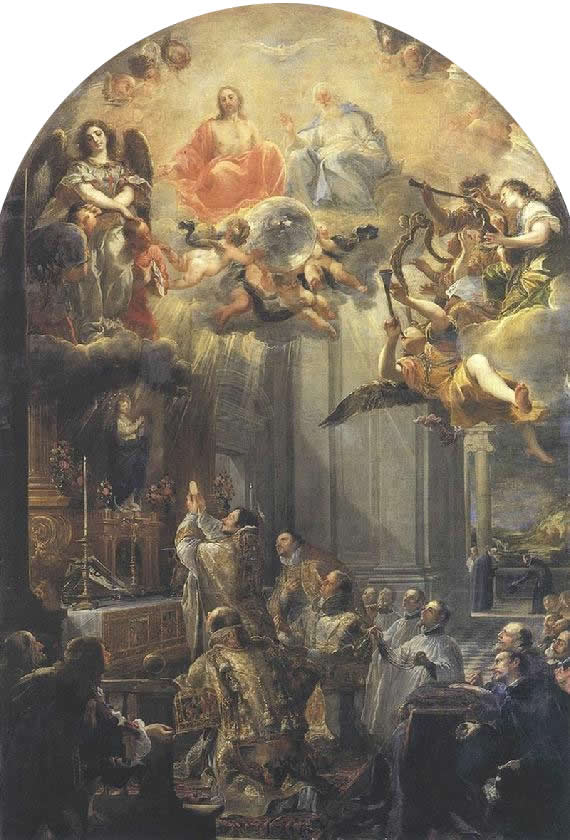 In the Book of Revelation, John describes a heavenly liturgy of angels praising God non-stop with the words: “Holy, holy, holy…” So when we sing the Holy, Holy, Holy; we join the angels in their song. Thus, it is us who join the ongoing heavenly liturgy, and in those moments heaven and earth come together to praise God. 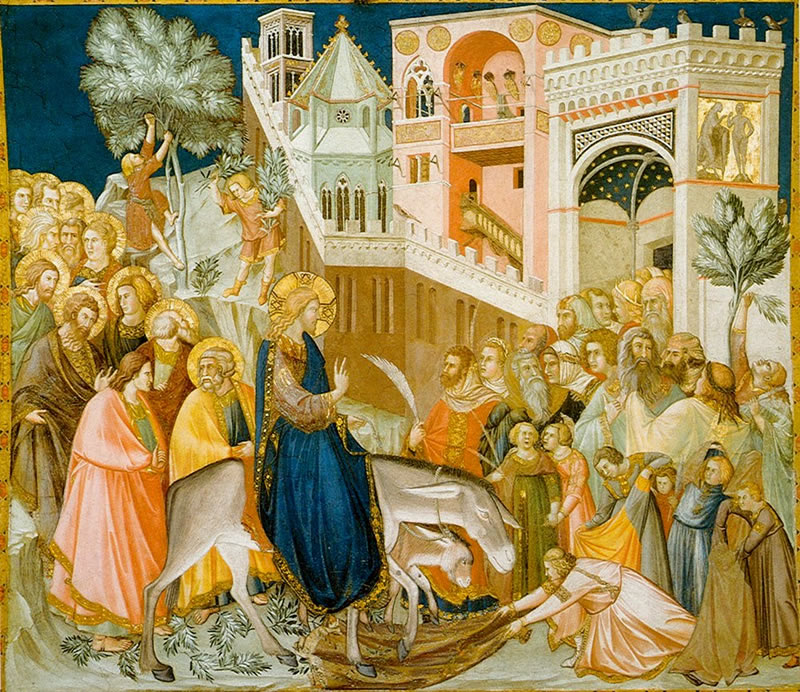 Before the consecration, the faithful say: “Blessed is he who comes in the name of the Lord, Hosanna in the highest.” This comes from Psalm 118 where people cry out Hosanna (“Lord, Grant us salvation!”) as they spread leafy branches on the road for the coming of the King. It is what the people were reenacting when Jesus entered Jerusalem before he went to the altar of the Temple. In mass, we say the same thing as we prepare ourselves for the coming of Christ, the King, whose real presence is about to “come” into the Eucharist on the altar.

The Corporal and Altar 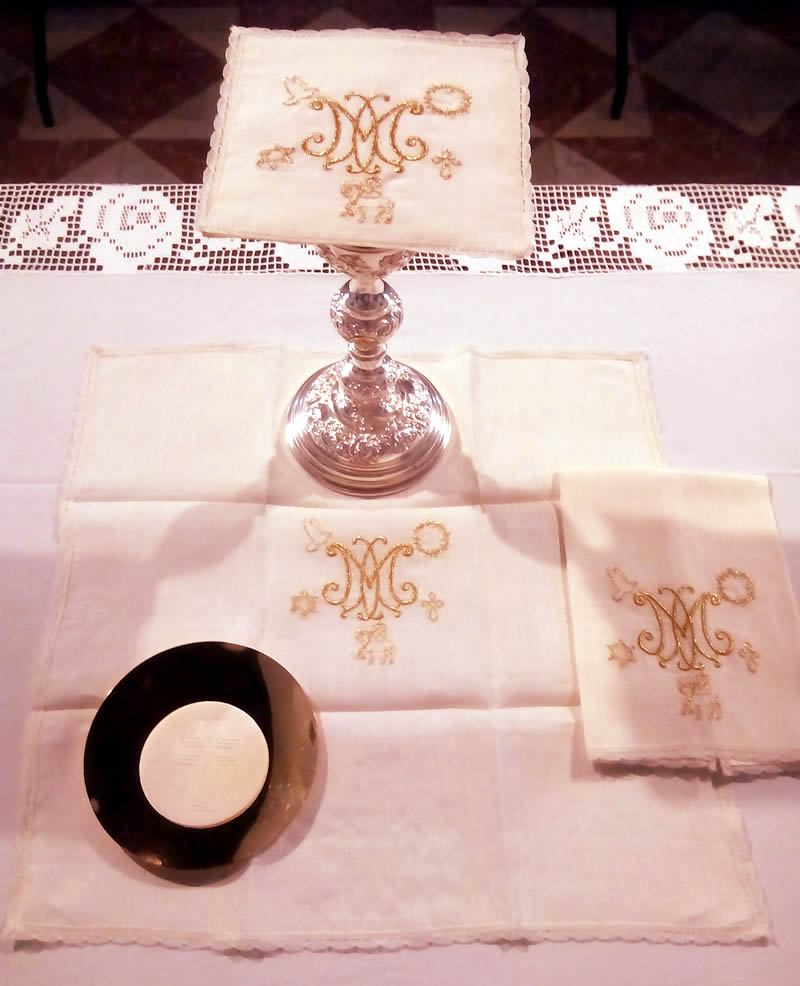 The corporal is a square-shaped linen cloth. It is placed on top of the altar, and the Eucharist is placed on top of it. In the older days, the altar was required to be made of a stone slab – usually marble. The entire ensemble of objects is supposed to When the priest raises the consecrated host, it is a symbolism of Christ raised on the cross. It is also a symbolism of Christ’s Resurrection when he rose (from the dead) above his linen and burial slab.

Separation and mingling of Body and Blood 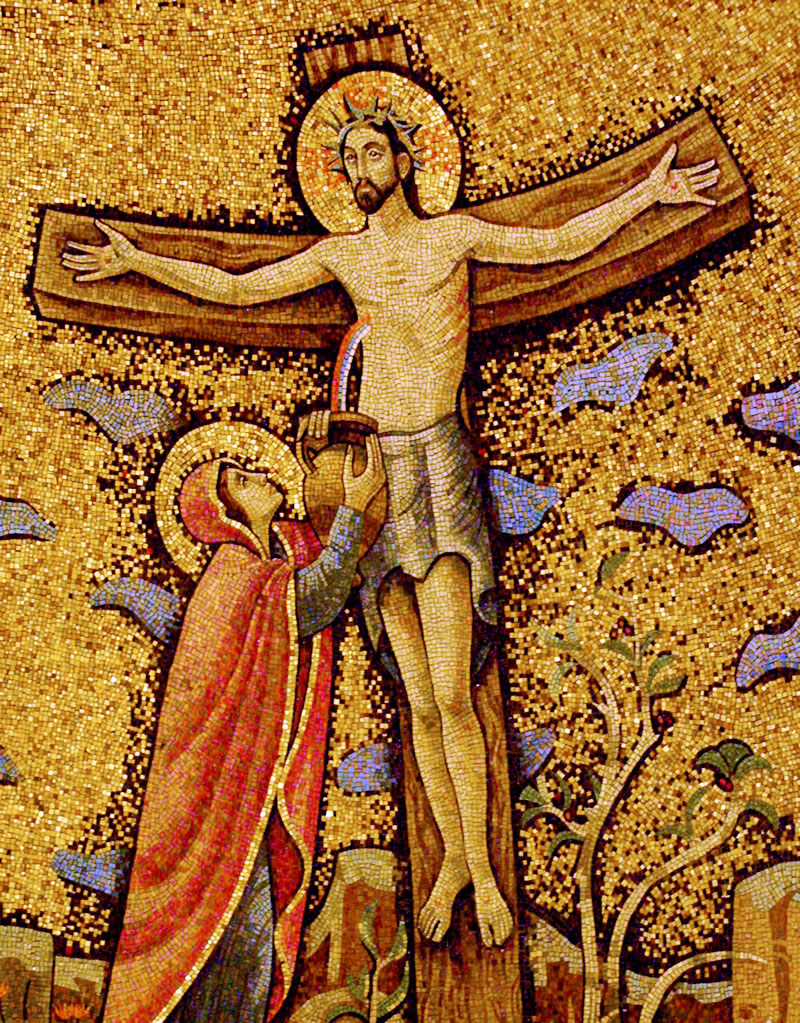 Following the command of Jesus to “do this in memory of me” the priest consecrates the bread and wine separately as body and blood of Christ. Sometime after that, the priest breaks off a piece of the host and drops it into the chalice to represent the separation of Christ’s body and blood. It is a visual “figure of speech” to describe Christ’s self-emptying.

It should also remind us of the original Passover when the Israelites separated the blood from the body of a victim and ate its roasted meat. They did this so that the angel of death would pass over their house and spare the life of their first born. During communion we eat this “holy meat” so we do not die spiritually. This should also remind us that the mass is a Holy Meal – a meal where the family of God come together.

Breaking of the Bread 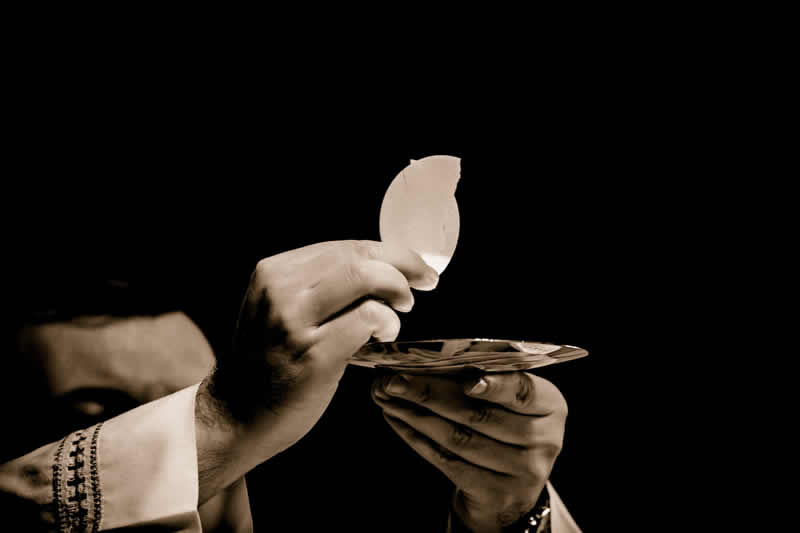 Before the priest drops a piece of the host into the chalice, he first breaks the host. Then he raises the broken host and says in the words of St. John the Baptist, “Behold, this is the Lamb of God who takes away the sins of the world…” This is another visual representation of the broken body of Christ of the cross. But why does John the Baptist call Jesus the “Lamb of God”?

When Abraham asked Isaac to carry the wood on his back on the way up Mount Moriah, the young man said: “Father, where is the lamb for the burnt offering?” Abraham answered: “God himself will provide the lamb…” The prophetic words of Abraham are fulfilled on Mount Calvary after Jesus carried the wood of the cross on his back up the hill. It reminds us that the mass is a re-presentation of the sacrifice on Calvary.

Wiping of the chalice 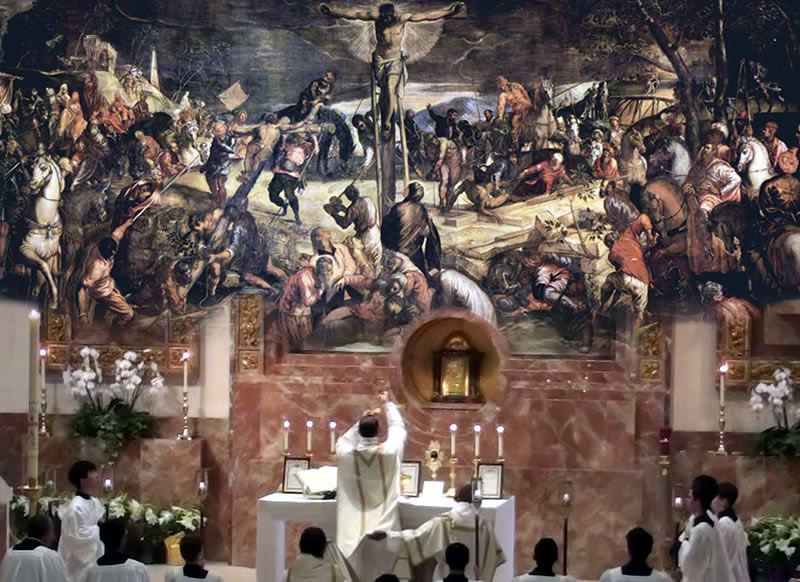 Before the priest places the wine in the chalice, and host in the paten, he wipes these vessels. It is a continuation of the Temple liturgy where the sacred vessels are cleaned before being used. (To sidetrack a bit, we call Mary “spiritual vessel, vessel of honor, and, singular vessel of devotion” because she contained Christ in her womb. If she is a vessel, then she must have been “cleaned” before Christ entered her – thus a prefiguration of the Immaculate Conception that rendered her clean of all sin.)

After communion, the priest also cleans the paten, and especially the chalice. This is also a remnant of the Temple liturgy when priests wiped the blood of the victim sacrifices. Thus, in mass, it reminds us that the sacrifice of the slain Christ to the Father was made present to us.

There are more symbolisms built in into the mass, and the list here is definitely not exhaustive. While we revel in the symbolisms that show how rich our Catholic tradition is, it would also be good to choose one symbolism from the list and concentrate on it on the next mass; then choose another to concentrate on on the next mass. Hopefully it will make the mass more meaningful as we experience what the words, objects, and actions mean.