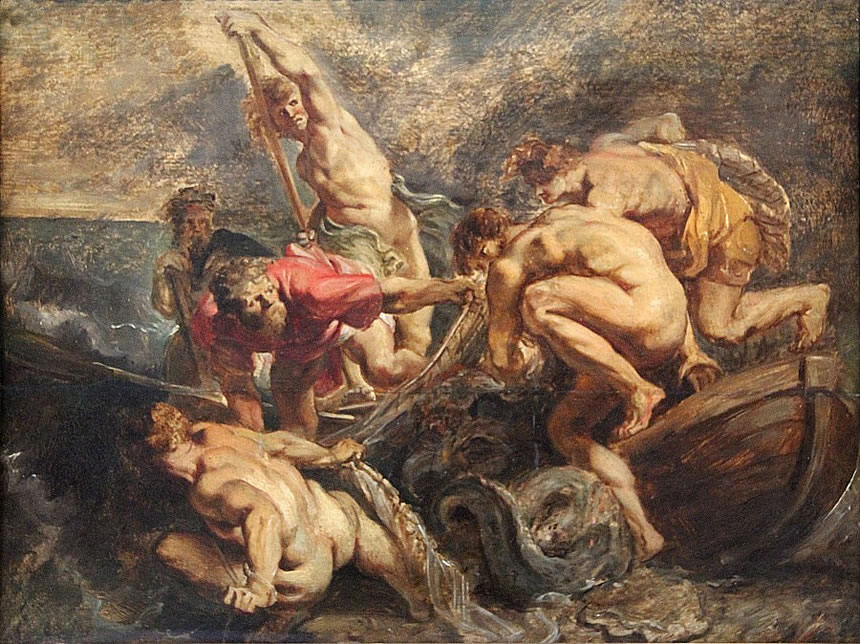 During Easter time the liturgical season takes readings from the Resurrection accounts. In the Gospel of John, there is a curious appearance to some apostles. It is curious because it shows a stark contrast in Peter’s character.

In Chapter 21, Peter and John and some other disciples were fishing in the Sea of Tiberias. Even after fishing the whole night, they caught nothing. That should sound familiar. When they were headed to shore, Jesus – still unknown to them – told them to cast their nets on the right side of the boat. When they realized they had a huge haul, John told Peter that, “it is the Lord.” Peter immediately plunged into the water and headed for Jesus who was on the shore by a charcoal fire with fish and bread. After they ate, thrice Jesus asked Peter to “feed my lambs.”

It is a stark contrast because during the public ministry of Jesus, he also asked Peter to cast his nets after they had a fruitless night of fishing. In that occasion Peter grumbled in hesitation. Indeed, how would a carpenter know what to do in fishing compared to him who was a fisherman by trade? During another boat incident, Jesus asked him to go into the water. Peter did, became afraid, and sank. Jesus saved him by pulling him out. Finally the detail of the charcoal fire on the shore is important because out of fear Peter betrayed Our Lord three times beside a charcoal fire.  After the resurrection, Peter agreed to whatever Jesus asked of him by this charcoal fire.

When Peter experienced the first miracle catch of fish, he told Jesus, “leave me for I am a sinful man.” He thought Christ would not love him because he was “sinful”. One more time Jesus comes seeking Peter, and this time he makes no remarks, he has no hesitations, and he has no fears. Such a difference. When once Peter was proud and felt self-sufficient, he is shown here as docile and trusting. Jesus has finally won Peter’s heart! He now knows that Jesus loves him no matter what. With that, he has “passed the test” and is now ready to be “sent.”

So Peter begins anew when Christ gives him this chance. It is the same with us, too. Jesus gives us chance after chance to begin a new life with him. He looks past our faults, our laziness, our arrogant pride, and our fears. Baptism washes it away, and if we fall, Confession allows us to start again and again.

Christ calls to us repeatedly, but we are like the old Peter who lacked a certain trust in God. Because we’ve learned to think we are the masters of our lives, we need to learn to trust God again. We need to live a life of utter dependence on him. Not that we become sloths and do nothing, no; but to realize that our successes are not our own. Instead we live and work, eat, love, and play, under his gracious providence.

But just like any virtue, this has to be practiced little by little. We need to listen to Christ in the silence of prayer, in the meditation of the mysteries of the rosary, in the quiet face-to-face meeting in Eucharistic adoration, and through a Spiritual Director. By doing this we will allow God to control our lives little by little. We will surrender to him the small inconveniences and grow in trust until we can offer up our major sufferings, and attribute to him our greatest successes. But we have to start somewhere. It is not in the shore of the old Peter where he feared God might not love him; instead it is in the shore with the charcoal fire – the shore where we realize Christ loves us regardless of our faults and allows us to begin with him again and again.

Jesus Scripture
Share this Post:
Previous Article
Don't Miss These Symbolisms At Your Next Mass
Next Article
The Holy Family