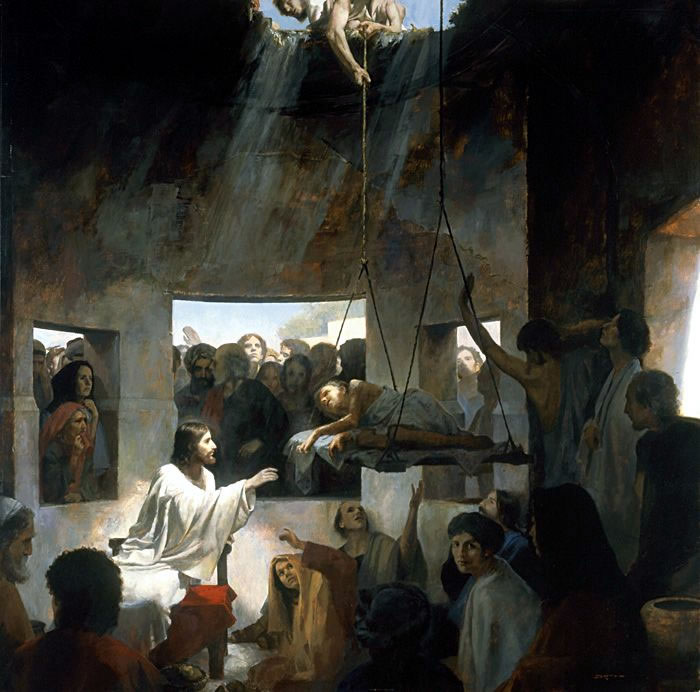 Christians believe Jesus’ claim to be God because he consistently spoke and acted in the person of God. The healing of the paralytic in Mark 2:1-9 (also Matthew 9:1-8) is a really good example because of the visual evidence.

In this account, a paralytic on a bed is brought to Jesus who tells him his sins are forgiven. To us it is quite odd that Jesus would forgive his sins when he came there to be healed of his paralysis, but to the Jews of that time it made sense. For them a person undergoing any suffering, illness, or disease is attributed to God’s punishment as a result of their sins. We can read this sentiment in the Book of Job when his friends insist that Job must have done something sinful to warrant his suffering. (This sentiment, of course, is not a Christian sentiment because we trust God brings a greater good out of our suffering.)

So in the eyes of all those present, the paralytic must be a sinful man because God allowed this suffering on him. Thus, it made sense that Jesus would forgive him.

But in the account, the scribes think this is blasphemy because it is only the transgressed – God in this case – who can forgive it; and that makes perfect sense. Jesus knows what is in their hearts (and ours) so he gives them proof – the healing of the man whose sins he just forgave. This is perfect evidence because if God allowed suffering for sin, then God can remove suffering if a man is clean of sin. Thus, when he cured the paralytic it would mean, to them, that the man no longer has sin. That should be proof indeed that Jesus is God because he can forgive sins as easily as he can remove the effects of sin.

The problem with the scribes and Pharisees of that time is that even when faced with evidence like this, they refuse to budge from their pre-conceived ideas of God.  We fall into this trap too even today. We have a pre-conceived idea of what God is, and so we don’t allow him to show us who he really is. We box him in our own image of him. The cure to this is to allow him to show us his wonderful awesomeness and mercy. Maybe the next time something good or bad happens to us, let us give it some afterthought and ask ourselves what good it has done in our lives. We can only do that, though, if we stop, shut off the world for a few minutes, and meditate on these things.

How to quash temptation the way Christ did in the desert

How does prayer, fasting, and almsgiving configure us to Christ?

The Custom of Chalking Doors