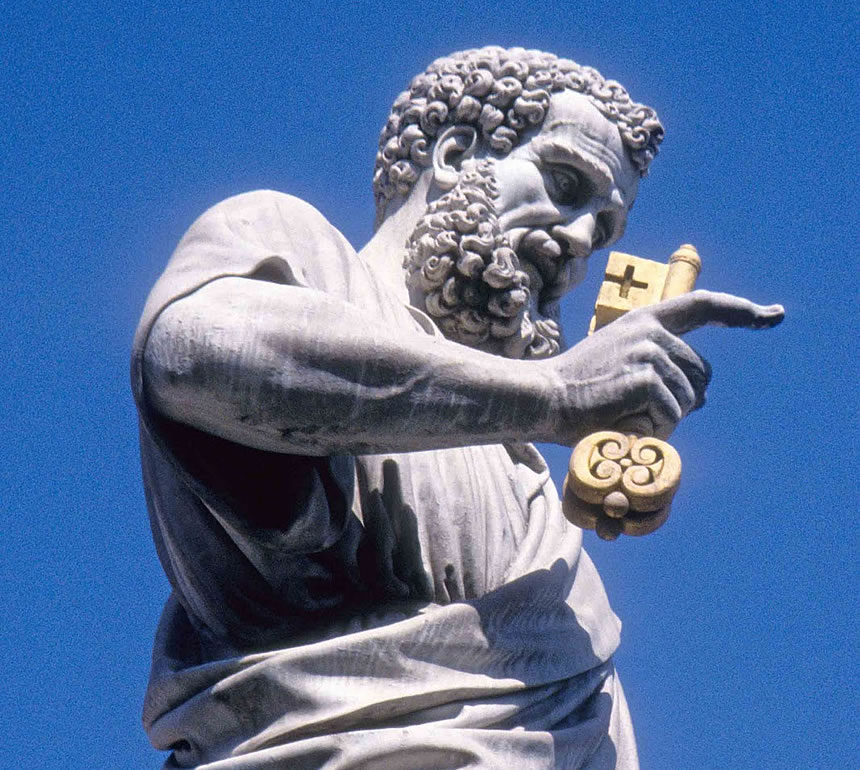 On the Feast of Our Lady of Lourdes, Pope Benedict XVI announced his abdication. As I listened to CNN, the BBC, and local stations, I heard odd things from newscasters.  Someone in a local station was referring to the pope as “the head of the Catholic Church.” No, he isn’t.  A guest on the BBC said there will be anxiety during the vacuum that the resignation will bring since a lot of Catholics pray to the pope on Sundays (and there won’t be anyone to pray to.) No, we don’t pray to the pope! Catholics never have and never will.  A newscaster on CNN said that the world waits to see if the new pope will reform the Church. Well said, but that’s not his primary job. It goes to show how much people know what the pope is and isn’t. So let us try to know a little.

Before anything else we have to understand the Kingdom of Jesus is so much patterned after the customs of the Davidic kingdom – of which Jesus is a Davidic King himself. Remember that Isaiah prophesied that the line of Jesse will be reduced to a stump, but a branch will emerge to be the messiah (Isaiah 11:1) – whom we know is Jesus Christ. Jesus is King in the line of Davidic kings and, therefore, he inherits the Davidic kingdom as well as the way they do things. Matthew and Luke trace the lineage of Jesus, through Joseph, to King David precisely to establish that Christ is a Davidic King.

In the Davidic kingdom, there is a certain high ministerial position. The person in that position can “open and shut” whatever he chooses, and the people have to follow. It is as if the King has ordered it himself. This makes it a very high position, second only to the king himself.  If and when the person in that position dies or leaves, another person is appointed to replace him. As a gesture, the king gives symbolic keys to this person to symbolize his appointment. We see this in Isaiah 22 when Shebna is removed from office and replaced by Eliakim:

This is the same hierarchical model Jesus uses in the Catholic Church when He told Simon:

Both passages of Isaiah and Matthew are so peculiarly similar because they express the same idea. So in His kingdom, Jesus creates a ministerial position – a chair – above all others, and he appoints Peter in this position. If you read Isaiah 22:20-21 you will see that this position is a very fatherly position, and that is why we call the person in this position, “pope” which comes from “papa” meaning “father.”

So if this is the hierarchical model we are following; the Pope is the highest official, but he is NOT the head: it is Jesus who is King. Therefore, He is the head.  In fact, we refer to the church as the “mystical body of Christ.” Obviously the head has to be Christ himself. We also refer to the pope as “Vicar of Christ” where “vicar” means “second in command” and gives us the word “vice” such as “Vice President.”

I suppose we can allow others to call the Pope “the head”, because that’s what has been accepted idiomatically; but as Catholics we should know better that this is technically incorrect because Jesus is the head of the Church He himself built. We better remember that (or else one day we might pray to the Pope as others think.)

It should be interesting to see the series of events leading to Peter’s installation in his position. Jesus asks his disciples “who do people say that the Son of Man is?” Next he asks them, “who do you say that I am?” When no one dares say anything, Peter boldly proclaims, “You are the Messiah, the Son of the living God.” (Matthew 16:13-19) It is after this proclamation Jesus gave him his position. The position, therefore, is because Peter has a clarity of who Jesus is. Every bishop, but especially the pope, has this Petrine characteristic of Peter’s clarity about Christ.

The Pope’s role, therefore, is to be an infallible arbiter in case of any doctrinal squabbles. BishRobert Baron likes to compare this position to a baseball umpire whose call is final. In Acts 15, in the Council of Jerusalem, there was such a squabble. Some Jews were teaching that salvation can only come to the circumcised – referring to the Law of Moses.  Paul and Barnabas joined the Apostles and some elders in Jerusalem to tackle the matter. After all the debates, Peter said, “But we believe that we shall be saved through the grace of the Lord Jesus, just as they will.” (Acts 15:11) After Peter spoke, “the assembly kept silent.” (Acts 15:12) Peter spoke and the matter was settled. End of discussion.

The pope’s primary job is to keep the deposit of faith error-free. This means he ensures that all the doctrine that Jesus taught, and which the apostles understood, are intact. We have to remember Christianity is a revealed religion. God revealed himself through the prophets and finally through Jesus himself who is God. So we cannot add nor subtract anything from this for we are mere creatures.

Because the pope was given the authority to “bind and loose,” this means he has the authority to determine what true doctrine is. Since Jesus also promised that error shall not enter into the church (Matthew 16:18), we say that the pope is infallible, or error-free when it comes to matters of faith and morals. It is a grace given by God to the pope so that he is prevented in making any error when he defines Faith and morals. (By the way, Catholics define “faith” as our response to what is revealed to us. It isn’t a synonym of “trust.”)  The pope has the clarity of St. Peter when he does.

Since in the Davidic kingdom the position of this minister doesn’t die with the minister, it is the same in the Catholic Church. When Peter’s chair is vacant (by death or abdication), we elect another one to sit on it. We can say that each pope occupies the office – the position – of Peter. This is why we say that the current pope is a direct successor of Peter and not the successor of the previous pope.

So the pope’s primary role is not to meddle in our affairs or think of ways to reform doctrine or tradition. His role, on the contrary, is to ensure the integrity of Apostolic Tradition by explaining doctrine in the light of new situations.  Benedict XVI himself said that we have to ensure doctrinal integrity even if that means people might leave the Church. This means he believes correctness of doctrine is more important than popularity.

Well what if the pope is a bad pope? Jesus didn’t promise that His church or His ministers will be sinless. Even Peter, who had the keys, abandoned Christ after denying him three times. His actions reveal his weakness as a human, yes, but it does not change the fact that he clearly knows Christ as the Son of the living God.  So it is impossible to have a pope, bishop, or priest who are sinless because they are human and all humans are naturally sinners. So regardless of a pope’s personal activity, it doesn’t change the fact that the pope is always correct in matters of faith and morals. Either we believe Jesus promised an error-free Church (Matthew 16:18 again)  or error did seep into the Church thus making him a liar.

It is a super-human effort to keep doctrine, but history is on our side when we can match doctrine era after era and we can find that it is the same doctrine from the time of the Apostles, Church Fathers, and early Christians. No pope, no matter how sinful, has ever changed doctrine.

If Jesus did not create this position for Peter to be filled by future popes, anyone could claim he or she understands what Christ taught that could be different from how the apostles understood it.  Groups would splinter endlessly as each group believes in a different doctrine. This, in fact, is sadly what is happening with some Christian denominations.  So the Papal office is important because it just does the opposite: it brings us together through a unified Faith.

As Catholics, we see the pope as someone who has the authority, from Jesus himself, to teach error-free doctrine. In fact, it is very reassuring that we have someone like this because we know that what we believe is what Jesus himself taught, and what the Apostles themselves understood. We must, therefore, pray for good priests, bishops, and popes. They are human, weak and tempted, and they need our prayers too.

Errors Scripture
Share this Post:
Previous Article
Lazarus: The Only Character in a Parable with a Name