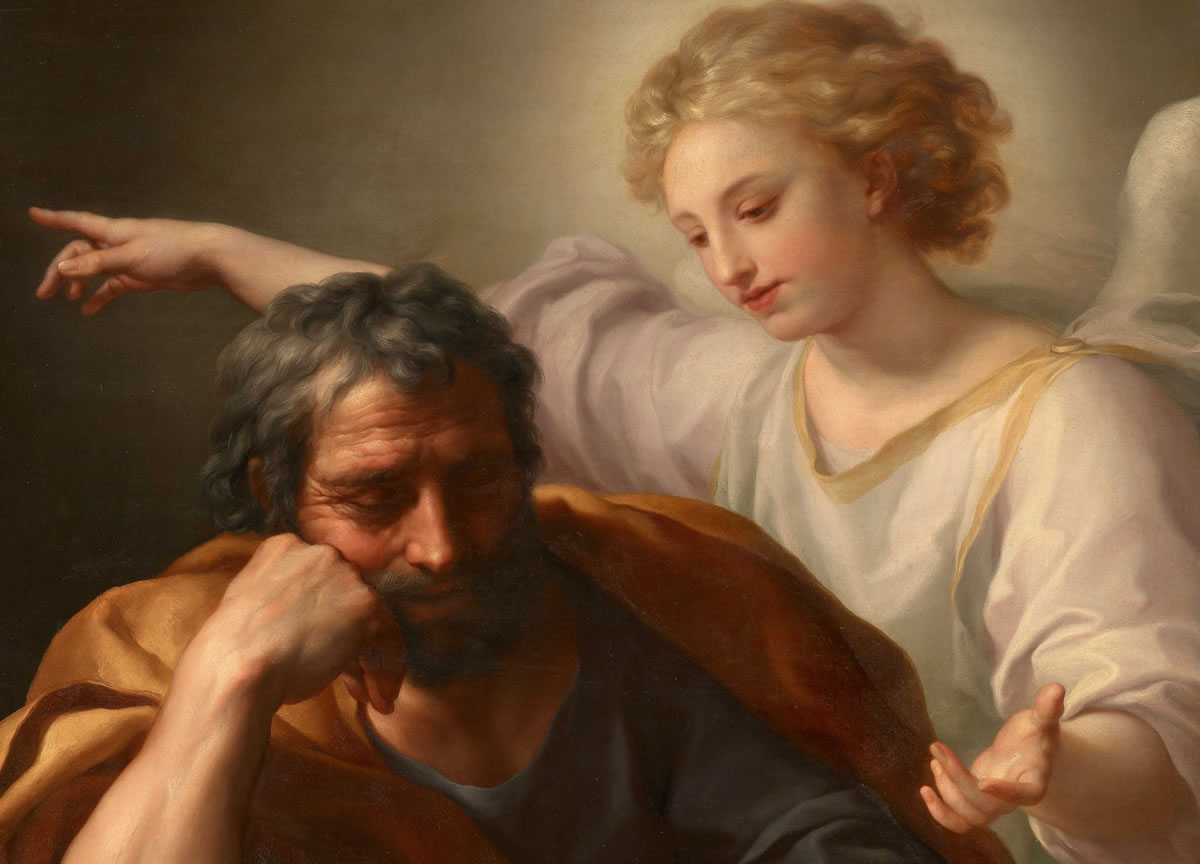 During Advent, and on Saint Joseph’s feast day on March 19, we read from Matthew’s Gospel the interesting details of the Infancy Narrative that the Gospel of Luke doesn’t tell us: Saint Joseph wanted to divorce Mary quietly. (Matthew 1:18-25)

At first reading, it might seem that Saint Joseph was surprised at finding Mary pregnant and assumed it wasn’t his because he had no relations with her. There, however, is this delightful explanation of Joseph’s actions that runs deep and far back in Christianity. It is beautiful and worth considering. Here is how it goes.

There is a manuscript called the Protoevangelium of James, which recounts the life of Mary before we meet her in the New Testament. It tells how Mary made a vow of virginity to serve in the Temple. To provide her a protector, the elders chose a widower named Joseph, and that is how the two were betrothed. This manuscript did not form part of the canon of the Bible, not because it was found to be false, but because it did not match one of the requirements, which was that it was not being used in the liturgy. (So you can see that the Bible was put together because the books in it were being used for the mass.) With that as a background, this manuscript is held in high regard by the Church, even if it didn’t make it into the Bible.

So, if Joseph knew he was to be a protector, he also knew he wasn’t to have marital relations with Mary because of her vow of virginity. It is therefore unimaginable that he would think Mary conceived a child with another man.

Another thing that we might not understand today is the meaning of betrothal. In those days, it is as good as being married. The last step the couple was to take was for Mary to go live with Joseph, and that didn’t happen yet. This is the point when Mary was visited by the Angel Gabriel.

If Joseph was Mary’s husband, how could she keep her pregnancy from him – knowing she would be visibly with child in a few months? As we know from Mary’s relationship with Joseph, he looked to him as a true husband – someone from whom she wouldn’t keep secrets. So, scripture scholars suggest, she must have told Joseph at some point. And this is where Joseph’s actions begin to make sense. It would seem, the scholars say, that Joseph felt he was unworthy to be the father of the Messiah, and protector of God’s son. He feared taking that role and the responsibilities that went with it. So, the greeting of the Angel to him was, “Joseph, son of David, do not be afraid to take Mary your wife into your home.” That greeting makes much more sense with that in context.

We should see Joseph as someone, not as a spurned husband who wanted to put away his wife, but as someone who felt he needed to leave the “scene” because he didn’t feel he was part of God’s plan. He saw himself so inadequate that he didn’t want to interfere in God’s good plan. This sentiment is the same sentiment of St. Peter when he saw himself for who he is when Jesus performed the miraculous catch: Peter said, “Leave me, Lord, for I am a sinful man.” (Luke 5:8)

But Joseph was indeed part of God’s plan. He was to be the protector of the Holy Family. He was to be a father to Jesus in a very real way. The Angel told him that he was to name Mary’s son, “Jesus.” In those days, when someone gave a name to a child in circumcision, he is claiming to be the child’s father. So Joseph wasn’t there as a token “husband and father” the Holy Family to keep from neighbors talking about a single mother. No! He was to be a real father to Jesus. He accepted it. The Gospel tells us that, “When Joseph awoke, he did as the angel of the Lord had commanded…” If Mary gave her “yes,” this is Joseph, “yes.” In so doing he became the protector of the Church for are we not brothers and sisters of Christ? Is Mary not our mother? The Church is the Mystical Body of Christ, and you can imagine any good father fighting tooth and nail to safeguard the body of his son.

The Gospels have never recorded Joseph saying anything, but his yes is loud and clear for its effects ripple until today. Let us be like him: silent, discerning of God’s will and obeying it.

Church Jesus Mary Scripture
Share this Post:
Previous Article
Lessons from the Visit of the Magi
Next Article
Contemplating the Mysteries of the Holy Rosary